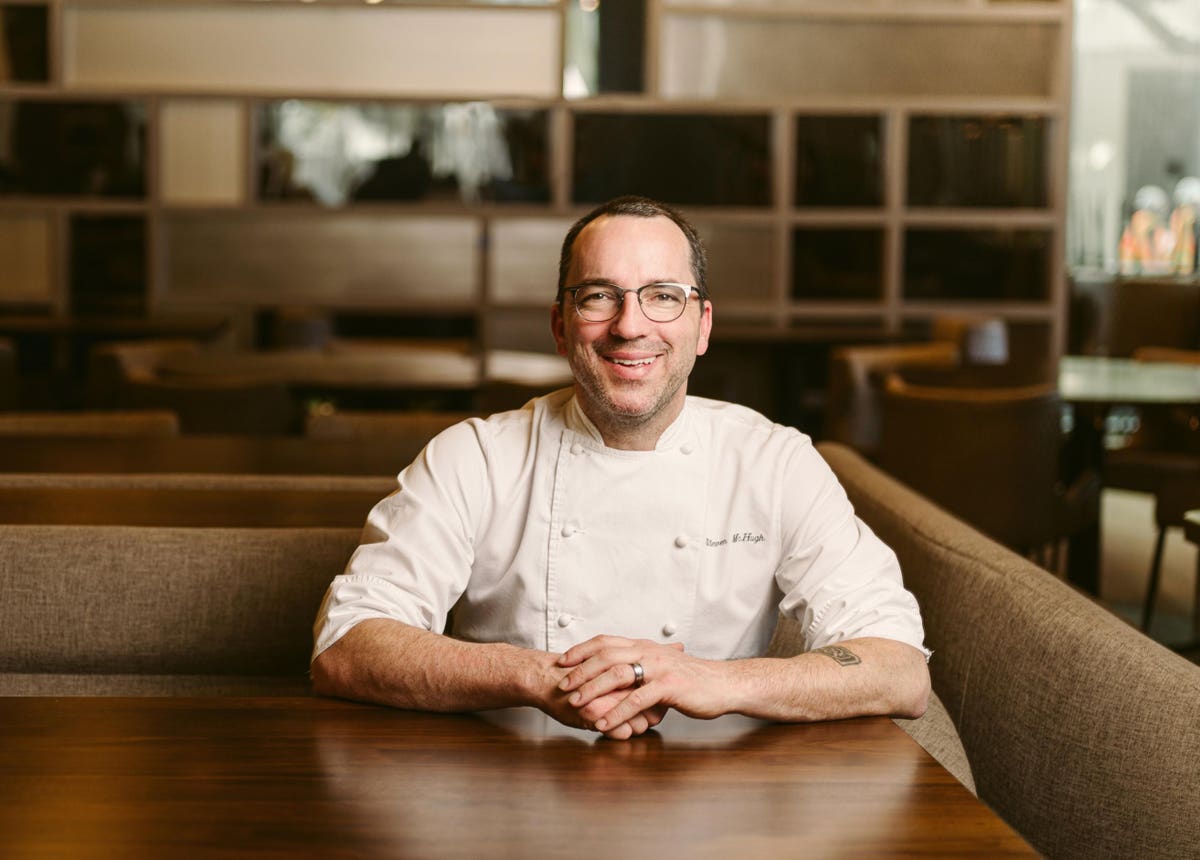 From his upbringing in a small farm in Wisconsin, Chef Steve McHugh has been immersed in farm-to-table cooking and eating, decades before it was a widely recognized trend.

He is one of only three chefs in Texas recognized as a Leader in the James Beard Foundation’s Smart Catch Program and a proud member of the Food Policy Council of San Antonio. He was recently recognized by the International Fresh Produce Association as a winner of the 2022 Produce Excellence in Foodservice Award.

A leader in culinary sustainability, McHugh is an advocate of indigenous Texas ingredients and a dedicated supporter of local food producers in and around San Antonio.

For all his accomplishments and deep commitment to his community, McHugh has, deservedly, been a six-time finalist for the James Beard Award for Best Chef in Texas. And every single time he’s made the trip to the award ceremony in Chicago, he has come back to San Antonio empty handed. Every. Single. Time.

“I’m not an awards chaser,” says the kind-eyed, soft spoken chef – the antithesis of the “celebrity” chefs often pushed down our throats. “I just do what I love, in the community I love.” Typical Steve McHugh. But despite his best effort, disappointment does show in those kind eyes.

After 10 years in New Orleans working as chef de cuisine at August, he moved to San Antonio to open Lüke where he stayed for two years. In 2012 he opened his first restaurant, Cured, an award-winning gastropub – named in tribute to his recovery from non-Hodgkin’s Lymphoma as well as the in-house cured meats program. His newest, Landrace at the Thompson Hotel, is an high-end open-fire kitchen with a sharper focus on Texas ingredients, simply prepared yet beautifully presented.

McHugh crafts menus distinct to each restaurant, but both reflect his sustainable philosophy and love for the land. The cocktail programs, overseen by McHugh’s wife Sylvia, follow suit closely. At Landrace, particularly, the cuisine focuses on foods that can be traced back to the land where they are naturally shepherded over time.

The word landrace describes plants and animals that have evolved in a specific place, adapting to their current environment to thrive. For McHugh, there is no other word that can best describe the direction of this new endeavor – or, for that matter, his entire life’s work.

Here, McHugh and his team partner with 20 heritage producers and farmers close to home who cultivate some of the earliest indigenous ingredients of the region. An example is the quail sourced from nearby Broken Arrow Ranch, a family-owned business that works with wildlife ecologists to identify over-populated herds on private land across Texas, utilizing selective harvesting to improve the health of the herd and land – an approach consistent with McHugh’s own high standards and commitment to respecting the environment.

“A chef not only has the responsibility of his restaurant and staff, but also to create a food system which is respectful to the enhancement of all persons in the industry as well as the environment in order to create a sustainable food space, continuing into the future,” he states.

His next project will bring his multiple talents to Austin for the first time. He has assembled a dream team to run all culinary and beverage programs at the soon-to-open Hyatt Centric Congress Avenue. McHugh and team will run Luminaire, the hotel’s all-day restaurant, and Las Bis, a bar located on the 8th floor, as well as oversee the hotel’s catering and banquet services.

“I am excited to run the whole food and beverage program at the hotel,” he says. “It will make the experiences much better for everyone, having everything under one umbrella.”

Yet McHugh’s proudest initiative is his current work on the Food Policy Council of San Antonio and the Tamōx Talōm Food Forest at Padre Park project. Located along the Mission Reach of the San Antonio River Walk, the 4-acre neighborhood park is being transformed into an urban food forest and edible garden, designed and maintained by the San Antonio community.

The Padre Park was once used by Native Americans and Spanish colonists to harvest food. The Food Policy Council consulted archaeologists and the Texas Historical Commission prior to using the land for the food forest, which will share an abundance of produce available to passersby, including peaches, pecans, plums, papaws, and persimmons.

For McHugh, this project is particularly meaningful. As the only chef on the park’s development sub-committee, McHugh and the team hope to provide a teachable example of how growing our own food in public spaces is the path towards a more sustainable future.

“My involvement in the Tamōx Talōm Food Forest is a small one, but one that I am proud of,” says McHugh. I am working with a group of like-minded individuals who are thinking about the future of the planet, 30-40 years from now. A food forest will take care of itself and produce food for those living in the area for years to come. And, unlike an urban farm, it will not need constant attention.”

McHugh’s mission is to build a unified restaurant community that extends well beyond the plate to positively enact change amongst chefs, starting in the kitchen, where they speak the same language. With this in mind, McHugh took the initiative to host A Night at the Chef’s Table event, featuring fellow San Antonio James Beard nominees John Russ [Clementine,] Esaul Ramos [2M Smokehouse,] and David Cáceres [La Panadería] for a four-course dinner at Landrace on August 31, 2022. All proceeds will support the San Antonio Food Bank, another organization near to McHugh’s heart.

When will the James Beard Foundation finally give credit where credit is long overdue?

The Woman Behind Baja’s Reimagined Rancho Pescadero
The best honeymoon hotels in the UK for 2022 and beyond
These Maldives resorts are leading the charge on sustainability
The secrets of Turkey’s historic capital of cool
Why Has Deliveroo Opened A Grocery Store?