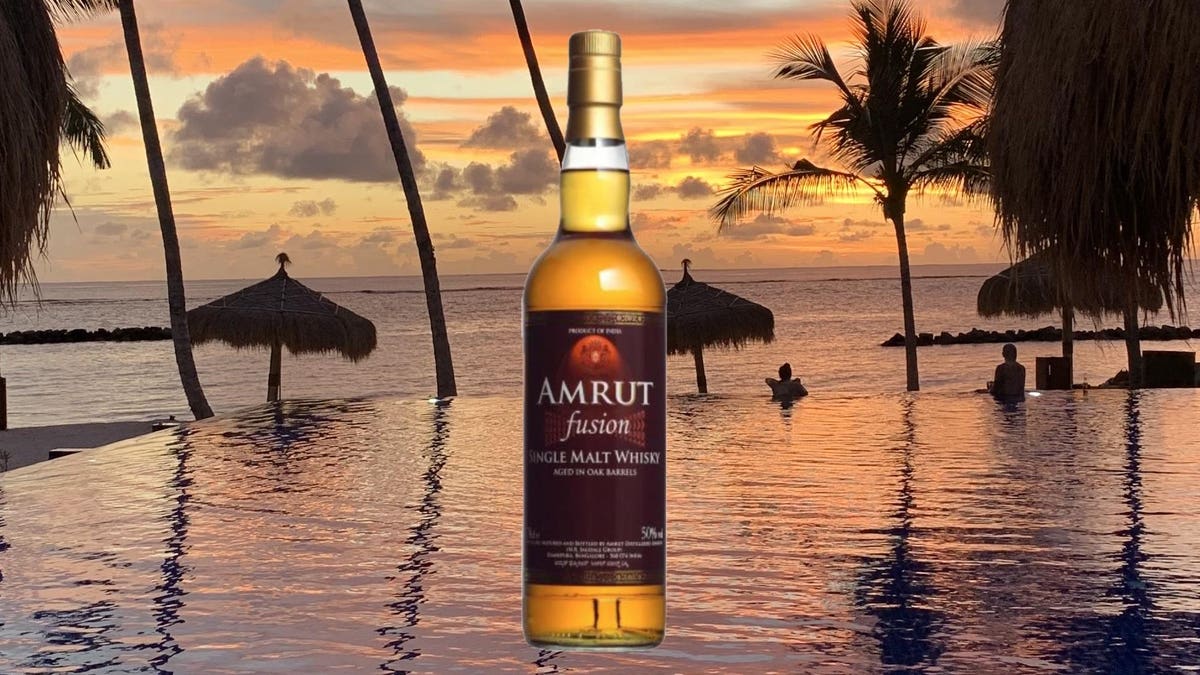 Scotland. Kentucky. Ireland. Japan. India? In the brown spirits space, the past decade has been marked by the rise of whiskies born beyond the boundaries of their stereotypical breeding grounds. The whisky world met ‘world whisky’. We saw it early in the 2010s with the meteoric rise of Japanese malt and grain. Taiwan climbed aboard not long after. As did Australia and New Zealand. The ‘20s ought to be India’s time to roar. And if you’ve been paying attention to what the experts have been saying, that time is long overdue.

In the US market there are currently three imported brands from the country that account for most of the Indian single malt market. They include Amrut, Paul John, and Rampur. Each is adding some compelling statements to the category. But it’s that first producer that was especially recognized earlier in the month at the International Wine and Spirits Competition.

It was there that Amrut netted an impressive 95 out of 100 score for its lightly peated Fusion label. Judges noted the following about this sophisticated sipper: “Complex and attractive nose with vanilla, fudge and hints of peat smoke. Opens up beautifully on palate with flavours of dried apple and apricot, toffee and gingerbread. Waxy mouthfeel and long, spicy finish.”

We couldn’t agree more with their assessment. The fact is, Fusion—which is widely available here in the states for around $70/bottle—remains a perennially overlooked single malt for its price. There is nuance, depth, and just the right balance of smoke and leather to place this particular expression in conversation alongside its well-established counterparts in Scotland.

Nonetheless, within India itself, many luxury consumers are more compelled by the wonders of high-end blended scotches. “This is the harsh truth from Indians who love their whiskey: We would rather drink [Johnnie Walker] Blue Label,” exclaims Anuj B. Patel, a Chicago-based connoisseur and collector of Indian whiskies. “I️ don’t have a lot of friends or family members back in India purchasing Amrut a lot but it’s really heartening to see the country earning a name in the game of single malts.”

It only makes sense that Amrut would be leading the charge here. After all, the company did pioneer the country’s use of malted grain whisky back in 1982. Unfortunately a set of laws and labeling circumstances in the nation impedes the progress of the category to this day. By Indian law, molasses-based distillate can be used in domestic whisky production. So the vast majority of bottlings—widely consumed from Kanyakumari to Kargil—is essentially rum-flavored whisky.

To be clear, these are brands that American and European consumers will never get to see, because they can’t be exported as ‘whisky’. The pioneering brands, Amrut and others, are showing just how exceptional actual Indian malt can be. And at prestigious judgings, such as IWSC earlier this month, these export markets are showing just how receptive they are to the nascent category. Paul John, for its part, earned a silver medal and an impressive 94-point score for its Pedro Ximénez Select Cask Indian Single Malt.

Keep your eye on this space, because early adopters will be rewarded with reasonably priced bottles. If the runaway success of Japanese whisky is any indicator, that Fusion might just get a tad pricier than $70 in the months and years ahead.