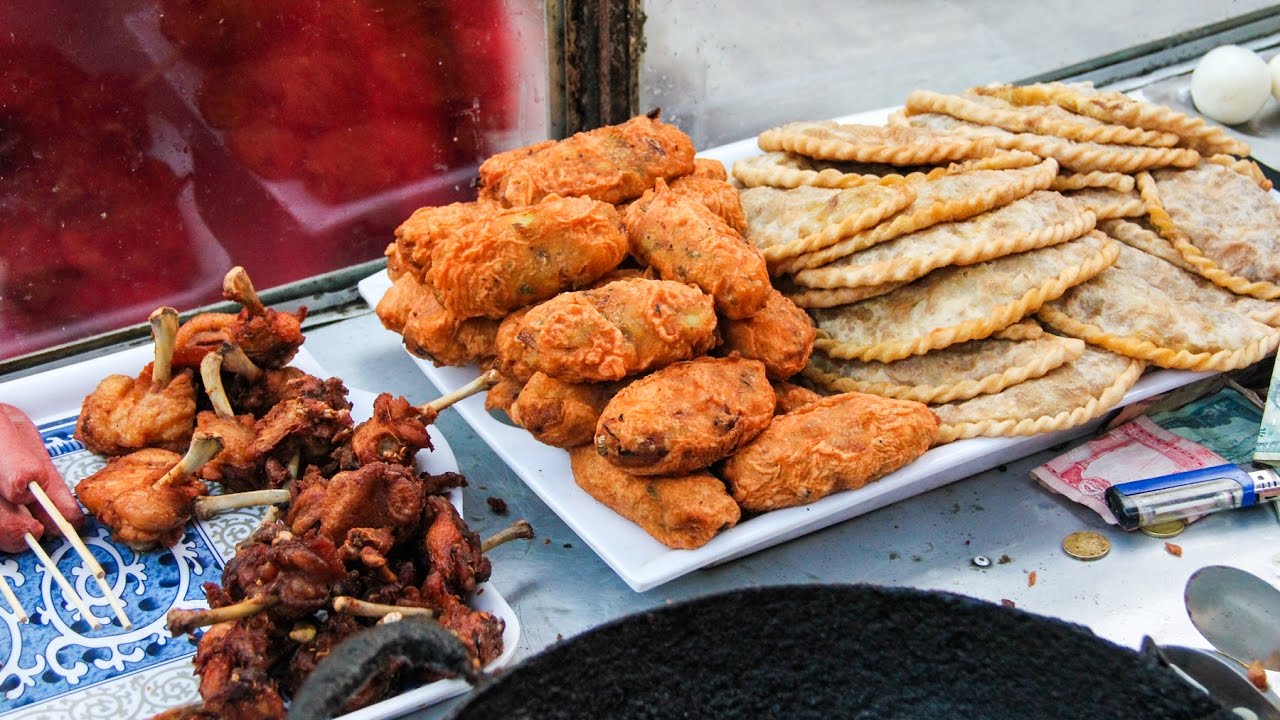 After traveling through India, we took a flight from Delhi to Kathmandu. I was excited to explore a bit of Nepal, and we first began our explorations in the largest city of Kathmandu. Kathmandu is a beautiful city and there are quite a few things to do. But as a foodie traveler, I was of course most interested in sampling Nepali food and also Nepali street food, which I knew very little about before visiting Nepal.

When I saw this cart that was cooking something extremely delicious smelling along with a pair of very friendly vendors, I knew I’d have to give it a sample. The vendors were very happy to be featured and I quickly ordered two items from their menu. All their street food were stacked within the glass encased cart and as soon as someone would order something, they would quickly dunk it into the hot oil until hot through and through. The vendors would then put them on top of a piece of newspaper, and slice them into pieces. Depending on your personal preference, the vendor would then scoop on a spoon of hot sauce to add extra flavor and complete the Nepali street food snack.

I started by street food sampling with a buffalo shapale, which is a Tibetan Nepali meat pie. It was filled with minced buffalo and possibly some onions. The flavor was great from the meat and it was improved by the hot and salty chili sauce. Next up was something known as an aloo chop, which is basically a deep fried potato cutlet. It was incredibly good, a ball of spicy mashed potatoes that were crispy on the outside and flavored so wonderfully. For my final Nepali street food snack this round, I couldn’t resist a small piece of Nepal style fried chicken. The meat on the little drumstick was pushed all the way to the end so it provided a chicken handle with which is hold while enjoying the chicken. The chicken was pretty delicious, a proper street food snack. Thanks for watching this Nepali street food video and hope you can enjoy these snacks when you visit Kathmandu!

Luxury Lifestyle Awards Unveils TOP 100 Hotel General Managers 2022Â
Welcome To The Year Of Yaupon Tea
If You Are Smart, Your Super Bowl LVII Party Can Cost You Less Than It Did Last Year
Fresh Take: The Truth About Gun Violence, Food Insecurity And Food Workers
Luxury stocks rally from China reopening, but world’s largest luxury market may choose to shop ‘in-house’