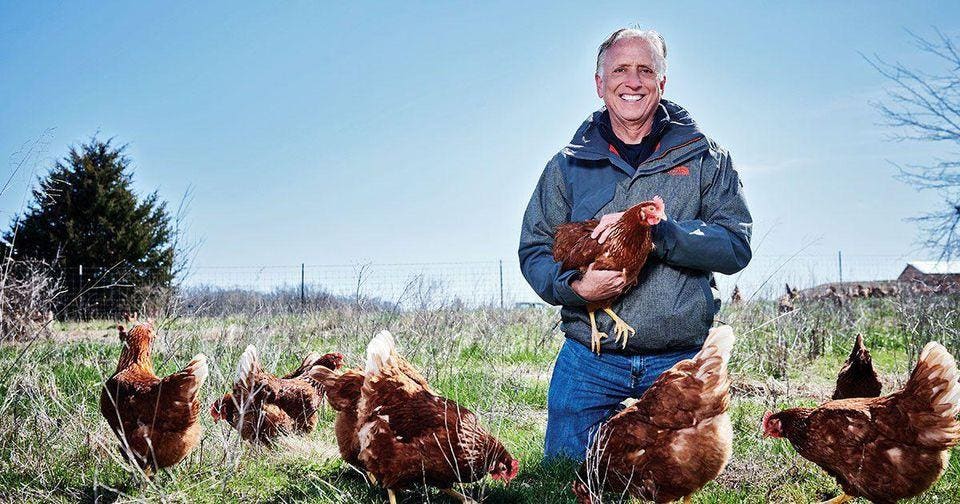 As investors rushed to pick up shares of Vital Farms just a few minutes after it started trading on Friday afternoon, founder Matt O’Hayer took a moment to share what he’s learned about scaling his pasture-raised egg company from 20 hens to an IPO.

“Always be over-capitalized,” O’Hayer said during a live interview on Instagram with Forbes.

Friday’s public offering did exactly that, filling Vital’s coffers with $200 million and giving it a market cap of $1.3 billion at the close. Just two years ago, when Forbes profiled O’Hayer in 2018, Vital Farms had raised $25 million in all, at a valuation Pitchbook estimated at $136 million.

Now the largest pasture-raised egg brand in the U.S.—and one of food industry’s most anticipated IPOs—Vital Farms delivered: Its shares soared 60%, closing at $35. Even before its public debut, it had to boost its opening stock price, initially planned between $15 to $17, to $22.

The company’s success proves that more ethical standards, like paying farmers and plant workers at a premium and not using futures contracts to hedge on prices are appealing to consumers—and investors.

And it can be replicated.

Vital Farms’ line of products, including butter, ghee and hard-boiled eggs, brought in $140 million in sales last year, with distribution in 13,000 grocery stores from Kroger
to Whole Foods
. Its network of family farmers now top more than 200.

“We wanted to produce food from small family farms at scale,” O’Hayer said on Friday from the Midtown Manhattan offices of Morgan Stanley
. “There doesn’t have to be a tradeoff with being a profitable company and focusing on your stakeholders. We treat the hens like the sentient beings they actually are, not egg-laying machines.”

Vital’s net income margin last year was 2.3%, almost double that of Cal-Maine
, the only other publicly traded egg company, which sells the brands Egg-Land’s Best, Land O’ Lakes and Farmhouse.

Give Beyond Meat some credit for the excitement, too. Its stock is up 175% since it went public last May, largely driven by outsized demand from institutional investors looking for more sustainable public investments.

O’Hayer remains the single largest shareholder, and owned 35% of stock ahead of the IPO, even after bringing in investors like Manna Tree Partners, cofounded by Gabrielle “Ellie” Rubenstein, the 32-year-old daughter of Carlyle Group
cofounder David Rubenstein. It’s an impressive feat in the food industry, known for investors buying up big stakes early on and looking for quick returns.

A lifelong entrepreneur (he started selling eggs door-to-door just before his 13th birthday, after his uncle paid his way through college doing so), this is O’Hayer’s second IPO. He founded a travel bookings company that went public in 1998 and went into a friendly foreclosure after 9/11. The business wasn’t ready for the crisis.

O’Hayer spent the next five years living on a catamaran where he and his girlfriend Catharine, now wife, sold vacation charters. In 2007 they moved to Austin—home of John Mackey, O’Hayer’s good friend and the founder of Whole Foods, who inspired O’Hayer to think about conscious capitalism. As O’Hayer heard more about the growing demand for food raised humanely and how hard sourcing it was, he decided to take a shot at the business. He purchased 20 Rhode Island Red hens and a 27-acre plot of land in Austin and started selling the eggs to local restaurants and farmers’ markets.

He wound up donating most of the eggs to a food bank because few people would pay the price he demanded—more than $10. “I wasn’t ready to sell them cheap,” O’Hayer, who delivered the eggs from a 2005 Subaru he still owns, said in 2018. “I wanted to establish what they really would cost long-term.”

Eventually mainstream consumers from Walmart
to Albertsons became fans of his pasture-raised eggs, and the scale helped bring prices down by more than half to $5.59 a carton today. Just 2% of American households buy Vital Farms today, and O’Hayer thinks going public will help him reach far more, quicker than if the company remained private.

“I was always looking for the exit. Instead of looking to get rich, I realized I could build a company where I was focused on employees, customers, shareholders, and the environment,” O’Hayer said. “It’s so much more fun than focusing on profit.”

As Tequila Takes On Global Ambitions, 818’s Mike Novy Weighs In On The Category’s Major Moves
After a catastrophic break-up I travelled the world solo – here’s what I learnt
Luxury Lifestyle Awards Reveals the Best of the Best in Hospitality Industry in the TOP 100 Hotels & ResortsÂ
Fungi-Powered Ingredients Startup Michroma Promising To Remove Petroleum From Food Colorings Raises $6.4 Million In Venture Funding
Visit the Home of Punxsutawney Phil for Groundhog Day