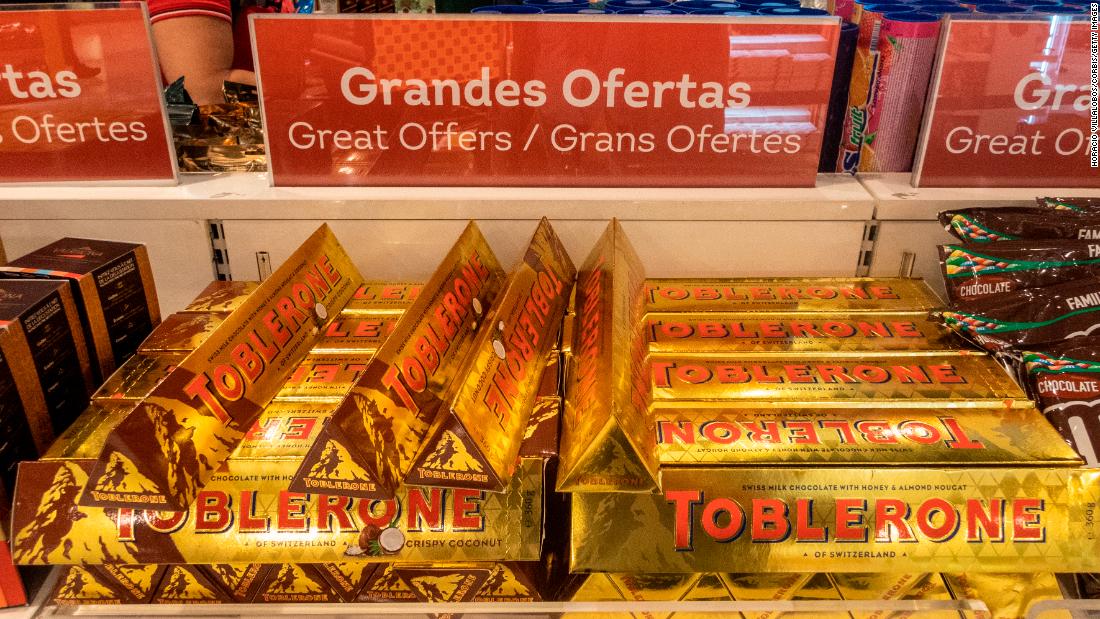 Travel
Share on Facebook
Share on Twitter
Share on Pinterest
Share on LinkedIn
(CNN) — Toblerone may not be the most famous chocolate brand in the world, but it’s arguably the most iconic — especially when it comes to travel.
Even if you don’t know Toblerone’s name, odds are good you can recognize it just by its shape. From the other side of a busy, crowded duty-free shop, it’s easy to spot the pyramid-shaped, gold foil-wrapped chocolate bars the brand is known for.

In an increasingly connected world, where Coke cans and iPhones are as omnipresent in Malaysia as they are in Manhattan, opening up a Toblerone still manages to feel like an experience you can’t quite replicate at home.

“[Toblerone] represents travel,” says Marianne Klimchuk, chair of the Packaging Design department at New York’s Fashion Institute of Technology. “The type style is like a vintage luggage label. It has authenticity and European cultural heritage. For something that is so dated in history, it feels very fresh.”

Despite its timeless feel, the candy is a relatively spry 112 years old.

Toblerones were invented in 1908 by Swiss chocolatier Theodor Tobler, who came up with the idea of filling creamy chocolates with crunchy Italian torrone (honey and nut nougat). That was the origin of the name Toblerone — a mashup of Tobler’s name and the filling’s.

Food writer and cookbook author Irvin Lin, like many kids around the world, grew up associating Toblerone with travel and exoticism. His Taiwanese-American family in St. Louis didn’t have a lot of opportunities to travel or to eat sweets, so Toblerone became an indulgence in both departments.

“It was something I associated with being a child, and that exclusivity of only getting it at the airport,” he explains. “Purchasing a Toblerone was very special for me. My friends’ families would go on vacation and they brought back this chic, European, long triangle-shaped chocolate. I never saw [Toblerones] at a grocery store. I thought you could only get it at the airport or when you were traveling and part of the jet set.”

While many consumers see the picture of an Alpine mountain on the package and assume the triangle shape of the candy is meant to emulate that, a representative from Toblerone says it wasn’t the original intention. “Most people believe the shape is a symbol of the Swiss mountain landscape … but the real story is actually about [how] Mr. Tobler wanted to create something different, going against the norm, a triangle in a world that was square.”

Although the quest to turn a bigger profit means that some food brands have strived to get themselves stocked in every grocery store in the world, Toblerone stands out as the rare product that hasn’t tried to be all things to all people. They don’t have any celebrity spokespeople or a catchy jingle. Despite the fact that you can get an identical Starbucks latte in any major city, a Toblerone chocolate bar still has a sense of insider access.

Klimchuk agrees. “The feeling of luxury and indulgence is where [the brand] hits the mark across cultures. That equates to how a traveler feels when they travel — it’s a treat, and when you travel you are treating yourself.”

And while the packaging has remained the same, there have been some updates over the years. Originally only available in milk chocolate, Toblerone has expanded to include white, dark and other flavors.

The brand also came under fire from its fans in 2016 when a redesign intended to reduce the amount of chocolate in each bar resulted in wider gaps between each triangle.

“Like many other companies, unfortunately we are experiencing higher costs for many ingredients. We carry these costs for as long as possible, but to ensure Toblerone remains on shelf, is affordable and retains the iconic shape we all know and love, we have had to reduce the weight of this particular bar,” Mondelez, the parent company of the Toblerone brand, said in a statement at the time.

Two years later, the original shape and size returned — albeit at a slightly higher price. It just goes to show what happens when change comes to a product with which so many people have nostalgic relationships.