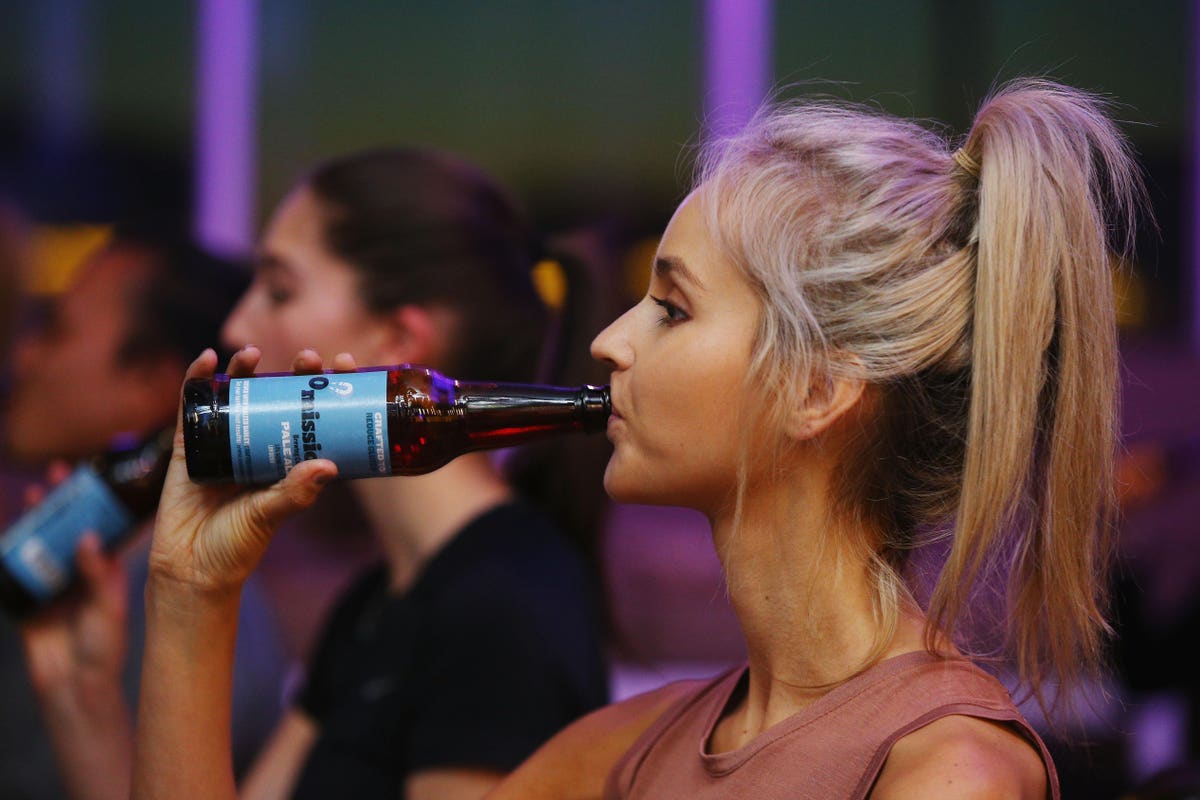 “For those of you who received cans and glasses in the mail, let’s make sure that they are chilled down and ready to go in about ten minutes time!” Matt Arrowsmith called out cheerfully over Zoom.

Arrowsmith’s background screen at the virtual tasting mimicked the label of a new beer called All-Free, made by Japanese whiskey and beer maker Suntory. But All-Free isn’t a regular beer. It’s a “beer-like beverage” that contains no alcohol, sugar or calories, the latest entry to the alcohol alternatives market.

Representatives for Suntory set up the virtual tastings last week, sending influencers and test tasters across the U.S. two sample cans and a glass with directions for chilling.

Takeharu Nakai, Suntory’s director of U.S. marketing and sales, and Yuichi Kato, the company’s head of of product development, were also on the call.

Suntory was founded in 1899 by Shinjiro Torii, a Japanese businessman who wanted to introduce western-style spirits to Japanese consumers. His first offering was a sweet wine called Akadama that was wildly successful, though Torii was to become far more famous for whiskey.

One of two early makers of Japanese whiskey—the other being Masataka Taketsuru, who worked for Torii before founding his own company—Torii built Japan’s first whiskey distillery, the Yamazaki Distillery, in 1923. The distillery still operates in Osaka.

Today, Suntory makes beer, whiskey and other beverages, including Kin-Mugi, the company’s malted beer, described as having a strong “umami malt” flavor.

According to Nakai, Suntory launched All-Free in Japan in 2010 and has since sold seven million cases.

Ten years later, the timing seemed right to launch All-Free in the United States, explained Nakai at the tasting. “Even though the U.S. non-alcohol beer market is still small,” he added, “there has been increasing health conscious consumerism contributing to market growth.”

Nakai pointed to the rise of dry January and sober September as evidence of the growing sober-curious trend in the U.S. Despite (or perhaps in tandem with) the many consumers cranking up their booze drinking these days, the sober-curious trend seems to be at least holding steady amid the pandemic.

How to make a beer-like beverage, hold the booze

“All-free is produced using the same ingredients as our premium beer,” explained Kato. The beer relies on spring water, hops and malted barley, crafted according to the same process the company uses to make its traditional beers. The difference is the beer makers stop right before the fermentation step, which is why All-Free contains no alcohol.

Kato spent years studying the American palate. “I visited the U.S. several times since 2015, and have tried over 300 craft beers and non-alcoholic beers,” he said. His visits took him to breweries in New York, San Francisco, Portland, Boston and Denver, where he came to learn that Americans prefer “stronger aromas” and “refreshing flavors.”

The company began tinkering with the recipe to please American tastes, but it also replaced the artificial sweetener used in Japan with a natural flavor, looking to satisfy the strong American preference for “natural” ingredients.

The U.S. market for alcohol alternatives has also been rapidly expanding. Booze-free craft cocktails were the first alcohol alternative to hit the market but the demand for alcohol-free beer is a little different. Consumers want to drink All-Free with lunch or even after a workout, Suntory researchers found.

Yet All-Free does have competition. According to Brian Yaeger, who covered the emergence of some of these booze-free options for The Takeout, Lagunitas Brewing has launched the Hoppy Refresher, a beer made with water, yeast and hops but no malted barley, which “deprives the yeast of any fermentable sugars” to be turned into alcohol.

Yaeger described the taste as “citrusy-hop water.” The Hoppy Refresher has lots of hops, obviously, but no bitter taste. Well, sort of. There is “perceived bitterness,” as Yaeger reports, but not as much as a typical IPA since Lagunitas beer makers don’t boil the hops.

Unlike the Hoppy Refresher, All-Free is made with both hops and malted barley. The taste is remarkably light, crisp and refreshing, much like the regular pilsner-style beers the company is known for although, according to beer reviewer Mark McDermott, “no one would mistake it for a beer.”

Still, McDermott seemed to appreciate the taste. “Enjoyed cold, even on ice, it could be a nice ‘recovery’ drink with no ‘diet’ stigma,” he writes.

“Cheers,” called Arrowsmith, as he encouraged everyone at the virtual tasting to keep sipping away.

All-Free is available for sale now in the U.S. at some supermarkets and restaurants, and will be available for delivery through Amazon
over the next few weeks.

Eat Local If You Want, But Not For Climate Reasons
Visit the Home of Punxsutawney Phil for Groundhog Day
Looking For Non-Alcoholic Drinks? Japanese Tea May Be Your Perfect New Companion
Valentine’s Day Gift Guide: The Best Italian Gifts For Pasta Lovers
Wine Industry Report Offers Insight Into DTC Sales In 2023