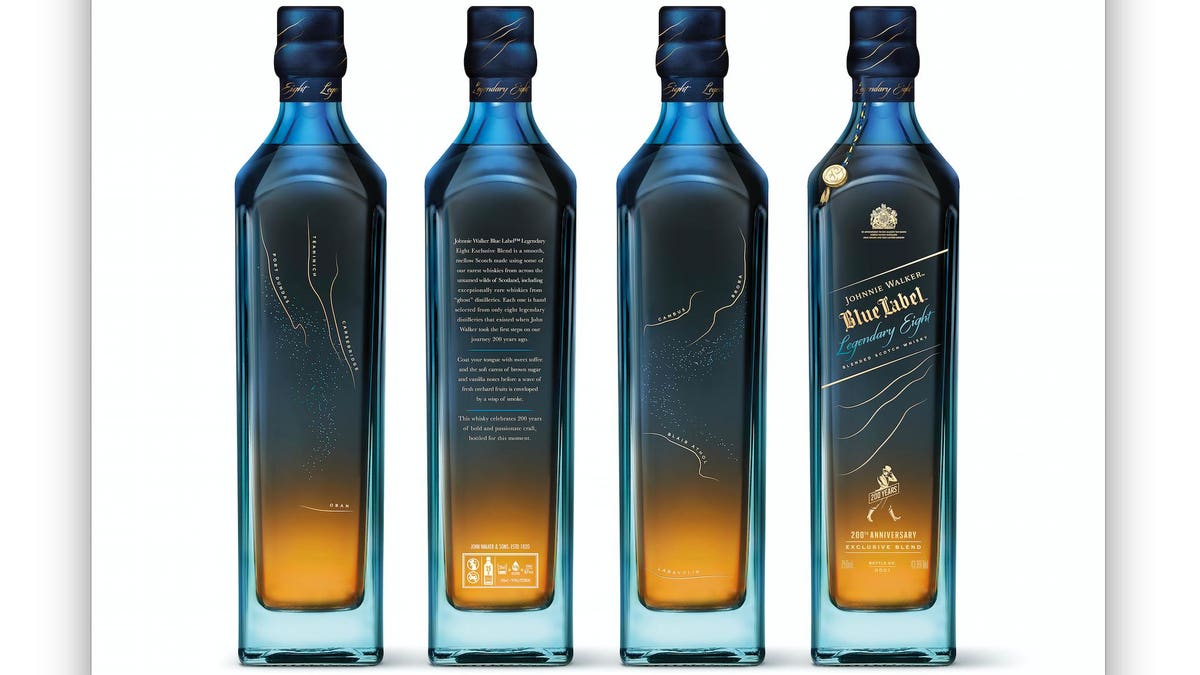 Johnnie Walker today announces the launch of a special edition Blue Label to commemorate its 200th anniversary. Legendary Eight is an elegant blended scotch set to retail at $350 per bottle when it arrives on American shelves in late fall 2020. The 87.6-proof offering is a tad stronger than its flagship counterpart and is comprised exclusively of liquids sourced from distilleries that existed in 1820.

The name of the new release refers to the eight iconic producers woven into its final composition. Precious stock from the shuttered facilities of Brora, Cambus, Port Dundas and Carsebridge has been mingled with matured spirit born from the active stills at Oban, Blair Athol, Lagavulin and Teaninich. The resulting liquid owns a lush, brown-sugar sweetness, tempered slightly with stewed apples and cocoa powder on the mid-palate. Before it goes down, the slight-yet-unmistakable presence of Islay smoke characterizes a persistent finish—dimming in the presence of fresh cracked pepper.

Johnnie Walker is the top-selling brand of blended scotch whisky on the planet. Each year it sells over 223 million bottles across the globe. As opposed to single malt, which comes from a solitary location, blends are a combination of malt and grain whisky derived from many producers. As such, there is no actual Johnnie Walker distillery. It takes its name instead from its original blender who, in 1820, began selling it out of his small grocery store in Kilmarnock, Scotland.

The softer grain spirit at its core often marks blended whisky as easier-drinking than its bolder malt-based cousin. Johnnie Walker helped propel this style to worldwide notoriety, where today the category accounts for just over 80% of the overall scotch marketshare.

Alongside the 200th Anniversary Legendary Eight, the Diageo-owned brand is preparing two other US releases to commemorate the occasion. John Walker & Sons Celebratory Blend is a $75 bottle highlighting the scotch styles that would have typically been found at his grocery store during the mid-19th Century.

On the super-allocated side, John Walker & Sons Bicentenary Blend will fetch $1000 a bottle. Utilizing exceedingly rare liquids from “ghost” distilleries—long-shuttered and cultishly revered producers—such as Port Ellen, Pittyvaich, and Cambus, this is the only new offering to wear an age statement. All of the whisky in the luxury blend is matured for no less than 28 years.

“Each of these exclusive releases bring a fresh perspective to our 200th anniversary story and are the perfect way to celebrate this huge moment for Johnnie Walker,” according to Jim Beveridge, Johnnie Walker Master Blender. “It feels very apt to be announcing them this week to coincide with John Walker’s birthday.”

The man responsible for what is now the world’s best-selling scotch was born on July 25th, 1805. To add an even timelier element, today’s announcement arrives on National Scotch Day. Sadly you won’t get your chance to sip on these limited edition liquids until late October at the very earliest. Enthusiasts will have little problem waiting, however. The love of whisky invariably involves a great deal of patience.

Fever-Tree And It’s Co-Founder Tim Warrilow Are Still Challenging Industry Norms
Where to Kick off Your 2023 Summer Travel
Fresh Take: The Truth About Gun Violence, Food Insecurity And Food Workers
10 luxury Sicily hotels for fans of The White Lotus
Tourism is roaring back in China. But the $6 trillion consumer market is digging itself out of a deep slump