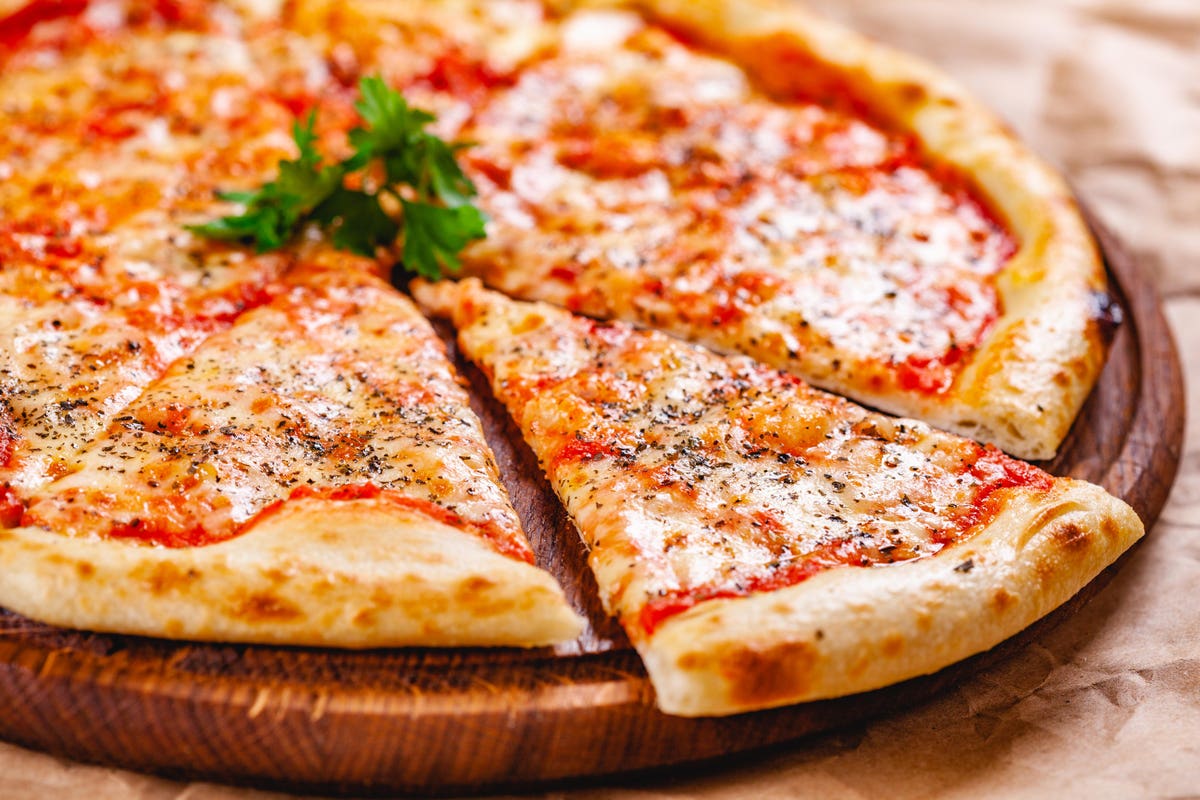 It is usually not a good idea to eat pizza “until you cannot physically eat another bite.” But say you’ve lost track of how much pizza you’ve eaten in one sitting, and ate one more pie than you intended. Can your body handle it? Well, in a study published in the British Journal of Nutrition, a team of researchers gave you a pizza of their minds.

The team consisted of researchers from the University of Bath (Aaron Hengist, Robert M. Edinburgh, Russell G. Davies, Jean-Philippe Walhin, Jariya Buniam, Javier T. Gonzalez and James A. Betts), Loughborough University (Lewis J. James), and the University of Bristol (Peter J. Rogers). They had the tough job of recruiting fourteen men, ranging in age from 22 to 37 years old, to eat pizza. After all, who in their 20’s wants to eat pizza. They ordered a bunch of Domino’s® Original Cheese & Tomato Classic Crust pizza to feed study participants. The publication didn’t specify whether they received all of the pizza in under 30 minutes.

Each study participant then had to go through two separate pizza eating sessions: the “eat until you are comfortably full” session and the eat “until you cannot physically eat another bite.” From hereon, the first of these two sessions will be referred to as the “comfortably full” session and the latter the “what have I done” session. In both cases, the session consisted of up to four study participants sitting around silently eating pizza. In what may be the most intense pizza party ever, participants could not speak a word and could only raise their hands when they were ready for another slice.

Not surprisingly, the “what have I done” session resulted in higher caloric intake than the “comfortably full” session, an average of 6397 calories higher. It also took on average longer time (53 minutes versus 16 minutes) to turn people into a leaning tower of pizza.

Also, in a finding that should surprise no one, hunger decreased over time during both session, but remained lower when participants stuffed themselves versus eating only until they were comfortably full. The desire for savory food dropped to very low levels during both session. However, the desire for sweet food did not tend to decrease among the “comfortably full” group. This is an example of the “there’s still room for ice cream” phenomena, where people still can eat dessert after a full meal. The desire for sweets did drop during the “what have I done” sessions. This does not mean that the way to cut down on the amount of dessert you eat is to stuff yourself pull with pizza.

People tended to grow more physically tired, sleepy, and lethargic during the “what have I done” session. This further supports the notion that coaches should not feed pizza to their team until they cannot eat another bite immediately prior to a basketball game. However, it doesn’t mean that pizza in massive quantities is a good sleep aid.

So it was apparent from the trials that eating much too much pizza can change you, make you feel different. Does that mean everyone’s bodies in the trial were overwhelmed? Well, not exactly. The researchers checked the participants’ blood nutrient levels after the feast in both sessions. The blood sugar levels stayed within normal ranges, increasing only by what you would expect after a normal meal. And, oh cheese, blood lipids levels (which includes triglycerides and fatty acids) bumped by only a small amount, even though pizza kind of has some fat in it.

It seems like your body may be smarter than you are when stuffing yourself with pizza. Various hormone and metabolic responses may help compensate for what you are trying to dough to yourself. For example, insulin levels went up by over 50% after the “what have I done” sessions. More insulin can lead to the sugar from the meal moving from your bloodstream into your tissues faster. In this tissues means body tissues like muscle, rather than the box of tissues that you use to wipe the cheese and sauce from your mouth. When you overeat, the rate at which food moves from your stomach to your intestines may slow down too so that absorption of the nutrients can slow down.

Of course, this doesn’t mean that repeatedly treating your body like a giant calzone and regularly overstuffing it with cheese and sauce won’t eventually overwhelm your body’s ability to adapt. There’s probably a correlation between eating “until you cannot physically eat another bite” all the time and bad health affects. However, it doesn’t suggest that the occasional binge may be OK.

Keep in mind that the study participants were men in their 20’s and 30’s who volunteered for a pizza study. Guys in their 20’s can still be in the “if it’s on the plate, give it me, mate,” phase of their lives. Or the “cold pizza for breakfast, lunch, and dinner because it is too difficult to turn on the microwave” phase. So if you are not in this demographic group, the results may not completely to you. Repeating such a study in a senior center may not get quite the same results.

Moreover, the study tested one kind of pizza and not all kinds of pizza with all kinds of toppings. (By the way, pizza with hot dogs on them is no longer a pizza. It is a hot dog with a round very flat bun.) Binging on cheese, tomato sauce, and dough may not be exactly the same as binging on other food items.

Plus, this was still a relatively small study. Therefore, it is not clear what would happen if a greater range and diversity of people were tested in such a manner. Fourteen people is not a whole lot of people. Nevertheless, they still did eat a lot of pizza.

Visit the Home of Punxsutawney Phil for Groundhog Day
Here’s where mainland Chinese traveled overseas for the Lunar New Year
Reports Say Young Drinkers Are Over Wine. What Do Winemakers Think?
Boeing plans to add a new 737 Max production line to meet strong demand
Where to Kick off Your 2023 Summer Travel