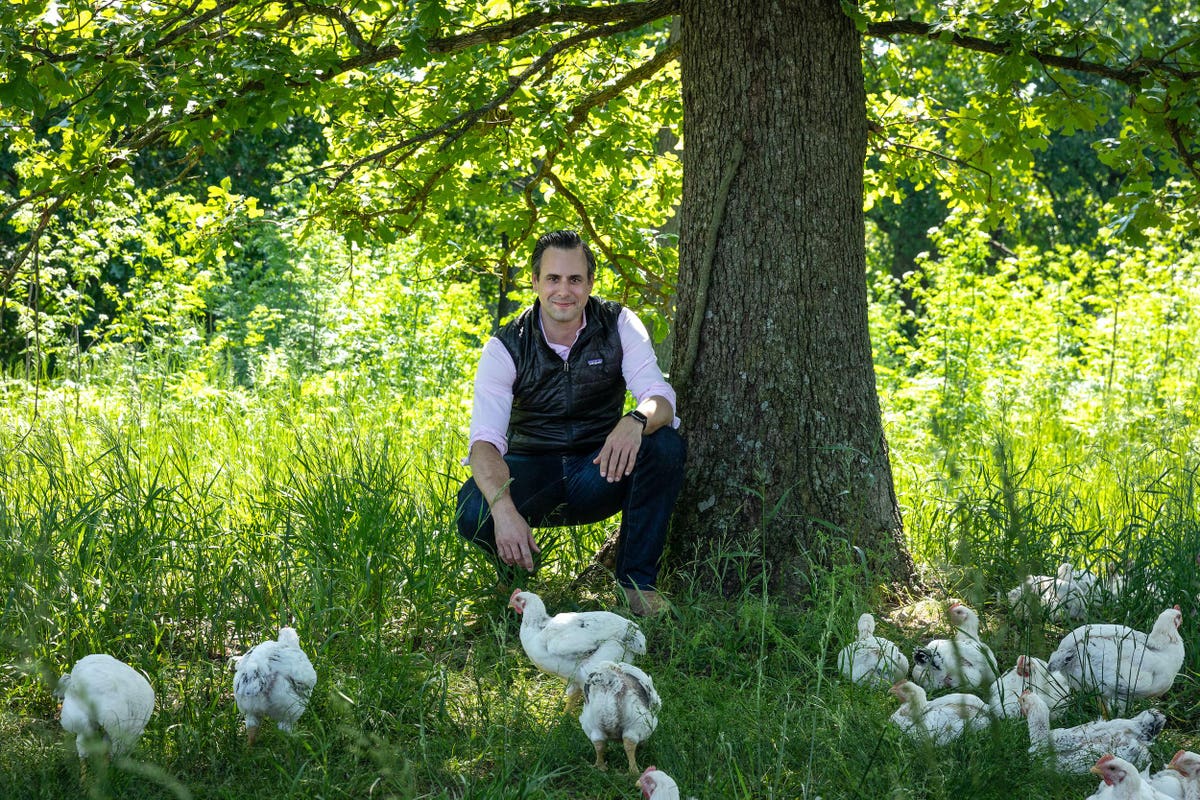 The U.S. poultry-breeding market has been dominated by two multibillion-dollar genetics companies for decades: Cobb and Aviagen. More than 99% of the chicken consumed in America is one of their two breeds.

His new company, Cooks Venture, raised $10 million this week in a Series A to further develop its new breed of chicken, which he says is better for the birds and tastier than what’s currently being sold. That’s one way to compete in a consolidated industry that amounts to a battle between David and Goliath.

While a certain kind of former tech executive has been known to retreat to raising chickens after cashing out, Wadiak’s Cooks Venture is no hobby farm. Sitting on 800 acres in the Ozark foothills of Northwest Arkansas, it is currently the only vertically integrated chicken producer in the country that has an independent genetics operation—it breeds through selection, not genetic engineering—without ties to Cobb or Aviagen.

“We have over 100,000 animals that we’re feeding just to produce genetics. I don’t monetize any of that,” Wadiak says.

Tyson-owned Cobb and privately held Aviagen have cornered the $28 billion market since the 1980s from selling their breeds—the Cobb 500 or the Ross 308—to U.S. farmers, but their success is more because of price than quality. These bow-legged and often sickly chickens are cheap and easy to grow, but, according to how Cooks Venture puts it in its newsletters, the meat doesn’t have as many omega-3s and breasts are prone to a woody texture.

Wadiak spent years coming to terms with the shortfalls of the food system while running Blue Apron’s supply chain network of more than 250 farmers. He was on the road constantly with Bill Niman, the legendary grass-fed beef farmer whose operation BN Ranch was later acquired by Blue Apron, and they often discussed their disappointments.

A month after Blue Apron’s highly anticipated IPO in June 2017 failed to skyrocket, Wadiak stepped down as COO and decided to re-envision poultry, America’s most consumed meat, as his second act.

“I thought I’d put my money where my mouth was. I’d been preaching for a decade about changing agriculture,” the 42-year-old says.

He bought Cooks Venture for an undisclosed amount in 2018 with a plan to bring its new breed to the masses. From day one, the costs racked up quickly. On top of the team of scientists he hired, the operation Wadiak acquired, which had been around for decades, included its own plant and 70 buildings, from hatcheries to research laboratories to the poultry houses themselves. And since Cooks Venture sells its non-GMO certified, pasture-raised chicken online and through e-commerce retailers like Thrive Market, he needed a CFO, a sales team, human resources and support staff.

“I was getting hundreds of thousands of bills every single week out of pocket,” he says. “It only works if there’s so many birds per week that are going out the door. And it’s a high number to get to that.”

Wadiak, who was once one of Blue Apron’s largest individual shareholders, has mostly cashed out of his shares since leaving. But he decided he still needed help from investors to grow his new capital-intensive business. The $10 million round announced this week includes funds from SJF Ventures and impact investor Larry Schwartz, who have long bet on the longevity of ethically driven agriculture. (The two also back pasture-raised egg brand Vital Farms, which filed its S-1 earlier this month in a much-anticipated IPO that investors hope will prove that model.)

It was tougher for others to wrap their heads around the costs.

“I’ve met with dozens and dozens of agtech investors who just don’t get it. Starting a Blue Apron kind of company doesn’t require any real cash. We started that business with less than a million bucks and never really burned cash for many, many, many, many cycles,” Wadiak says. “You don’t have a business that has negative working capital. Customers pay. You pay your vendor 60 days later.”

Blue Apron did eventually raise capital—more than $300 million at a $2 billion valuation by the time it went public—and burned through cash so fast that it’s since become a Silicon Valley cautionary tale. Even after a pandemic-driven resurgence, the meal-kit company’s current market cap is a paltry $182 million.

One issue Blue Apron long struggled with is changing established consumer behavior. It seems Wadiak is still trying to do just that with Cooks Ventures; he insists he’s building the company to create a massive change in diets, which takes a long-term approach. But this time, he plans to remain the majority shareholder as the business grows. “It’s different because I’m in the driver’s seat,” Wadiak says. “I’m able to do things the way I want to do them.”

Much of that revolves around letting the experts and scientists shine. Cooks Venture’s breeding work had been going on for a decade, led by Richard Udale, the world’s foremost expert in slow growth breeding in the modern chicken industry. Blake Evans, who grew up on the farm (his grandfather Lloyd Peterson began experimenting in genetics in his garage in the 1940s), now works as Cooks Venture’s executive vice president. Their work created the breed now called Pioneer, which is what Wadiak is pitching to customers as chickens with better leg health and bone density, along with stronger immune systems and gastrointestinal health.

Another differentiator: Cooks Venture’s partnership with FoodID, which was cofounded by Bill Niman and officially launched this week as the meat industry’s first platform to comprehensively test the presence of antibiotics and other adulterants.

For years, antibiotics use in animal agriculture has been a hot button issue, as over 70% of the total use of antibiotics globally are used in livestock, which leads directly to antibiotic resistance in people. Plus, the poultry industry’s murky supply chains have made it hard to trace whether what ends up being labeled as antibiotic-free or organic actually is. Niman’s team has worked for years inside many of the industry’s slaughterhouses and has been otherwise unable to verify many “no-antibiotic” label claims. “Whether it’s 5% or 55%, it’s a deceit and deception,” Niman says.

Because of FoodID, Cooks Venture is now the only company that can independently validate that it never uses antibiotics and that it provides verified non-GMO feed to its birds. Its chicken is also the first to be tested for synthetic inputs in America.

“After Blue Apron, Matt saw an opportunity to step in and become a farmer,” says Niman. “But he doesn’t do anything small.”