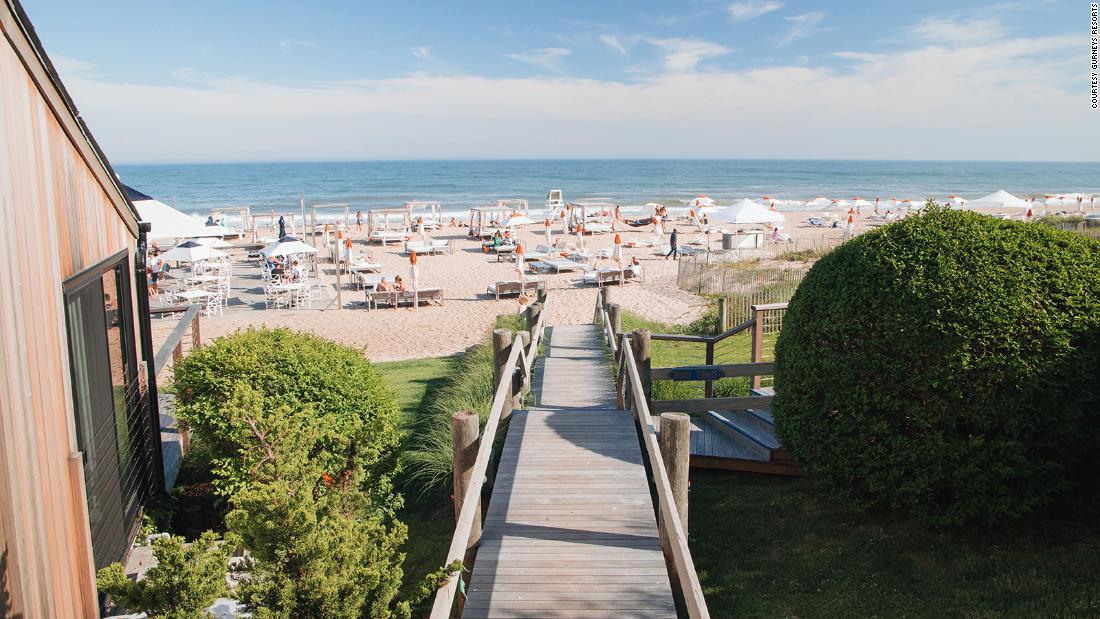 (CNN) — If there was any doubt whether travel-starved vacationers would stay in hotels after months of lockdown due to Covid-19, it should be gone now.

Data indicates that US hotels located in popular vacation destinations, many of which reopened in May and June, are booked for the summer season.

While nationwide hotel occupancy is nowhere near pre-pandemic levels, Carter Wilson, a senior vice president of consulting and analytics for the hotel research company STR, says that people are indeed checking into properties, especially ones close to beaches and national parks and on weekends.

“People are definitely eager to travel,” he says.

Luxury properties are in high-demand

Boutique hotel The Reeds at Shelter Haven on the New Jersey shore is doing brisk business this summer.

Luxury hotels in summer getaway hotspots, like the Jersey Shore in New Jersey, are finding business is booming, and are at (albeit reduced) capacity for most, if not all, of the summer.

Managing director Ron Gorodesky says that the property’s suites have been fully occupied for the month of June and are fully booked in July and August as well.

“Despite the 60 percent occupancy cap we had on rooms, our hotel revenue in June matched or exceeded most June 2019 dates,” he says. “July 4th broke records, and we are on track to meet or exceed our projected room 2020 sales.”

“It was like someone turned the faucet on. We went from getting a 100 calls a day from potential guests a month ago to 900 in mid-June. ”

Owner George Filopoulos said that the Montauk property, a beachfront resort, and Gurney’s Star Island, home to the largest marina in the Hamptons, collectively lost 3,284 rooms in June from corporate retreats and weddings being canceled.

However, the resorts saw 2,500 more transient room bookings in June, compared with last year. “Rates are higher for individual bookings than groups so our total room revenues are the same as last year,” he says.

Gurney’s Montauk beachfront resort has been packed this summer — despite Covid-19.

Evidence from other luxury properties also indicates a robust interest in summer leisure trips, even if they’re close to home and by travelers with more disposable income.

Daniel A. Hostettler, president and group managing director of Ocean House Management, a collection of luxury properties in Rhode Island and Massachusetts including the legendary Ocean House in Watch Hill, Rhode Island, says that demand for stays is on par and even ahead of previous years.

“It was like someone turned the faucet on. We went from getting 100 calls a day from potential guests a month ago to 900 in mid-June,” says Hostettler.

The newest addition to his company’s portfolio, a 3,500-acre property in Richmond, Rhode Island, called Preserve Sporting Club & Residences, is also seeing high demand and even getting multiple requests for buyouts.

The Lodge at Blue Sky outside of Park City, Utah, is an outdoor enthusiast’s dream locale.

Demand is shaping up to be so high, particularly for pricey properties where room rates start in the four figures, that it can be hard to find space, save for an odd night here and there.

Chelsea Martin, a luxury travel advisor with Full-Time Travel in New York, says that several of her clients who contacted her about summer trips assumed that they would have their pick of properties. In fact, the opposite is turning out to be true.
“Some of the top hotels like Amangiri in Utah are booked almost all summer,” she says. “We are used to having the world as our oyster, but international travel has so many unknowns so domestic trips are a safe and extremely enjoyable option — that is if you can get a hotel room.”

Camp Sakira by Amangiri opened in the Utah desert in July 2020.

Driving instead of flying

According to hotel research firm STR’s data, 14.3 million hotel rooms were sold in the United States for the week ending June 13 — half compared with the same period last year but nearly double the 7.2 million rooms sold for the week ending April 11.

Rummy Pandit, the dean of hospitality management at Johnson & Wales University in Providence, Rhode Island, agrees. “Travelers may still be shying away from planes, but they are happy to jump into their cars and drive to stay at a beach resort or countryside property,” he says.

Pandit is right about people still not flying. According to the trade group Airlines for America, US airlines were transporting 2.5 million passengers a day prior to the health crisis.

As travel restrictions and stay-at-home orders were implemented, demand for air travel declined to its lowest point in April when it was down 96 percent. Currently air travel is down roughly 80 percent, after an uptick around the July 4 holiday weekend.

Scheduled flights, however, are increasing to beach destinations. For example, Hawaiian Airlines recently brought back a number of flights (which were drastically, if not entirely, reduced during the spring and early summer) from the mainland to most of the islands by August.

In addition, a recent survey from the American Hotel & Lodging Association (AHLA) of 2,200 adults found that 44% of Americans are planning overnight vacations or leisure travel in 2020. In the summer, road trips and long weekends are of high interest. Also, 68% of these expectant travelers say they are likely to stay in a hotel in 2020.

“Travel is by no means back yet, but we are encouraged to see people begin to travel as their communities reopen, and we all learn to navigate this new normal,” said Chip Rogers, president and CEO of the AHLA, in a release that reported the survey’s results.

From an overall brand perspective, Red Roof Inn, with 645 US properties, has seen a steady uptick in hotel occupancy over the last four weeks. Numbers are now at 63%, says chief marketing officer Marina MacDonald, compared with the same time last year when they were at 70%.

“Beach, mountain and lake locations where travelers can maintain social distancing are particularly popular,” she says. “Destinations with the highest demand include Panama City, the Tennessee mountains and suburban Chicago.”

Also, Best Western Hotels & Resorts is seeing encouraging signs of recovery with increased occupancy in recent months. According to spokeswoman Katie Ray, since occupancy hit bottom at the beginning of April, it has steadily improved each week, with the exception of the first week of June when curfews and unrest/uncertainty impeded recovery.

From the second week of June, however, that changed: today, some areas of the country are running similar occupancies as this time last year.

Numbers are strongest in the southern part of the country in areas such as Texas, Florida and South Carolina, she says, and slower in New England and the Midwest. Whether this trend continues as cases continue to rise in Texas and Florida remains to be seen.

Not a fan of cruising? The hack that could change your mind
The best Gran Canaria resorts
Travel companies are ‘greenwashing’ — here are 3 ways to find ones that aren’t
Winter weather disrupts hundreds of flights across Texas
Where to Kick off Your 2023 Summer Travel