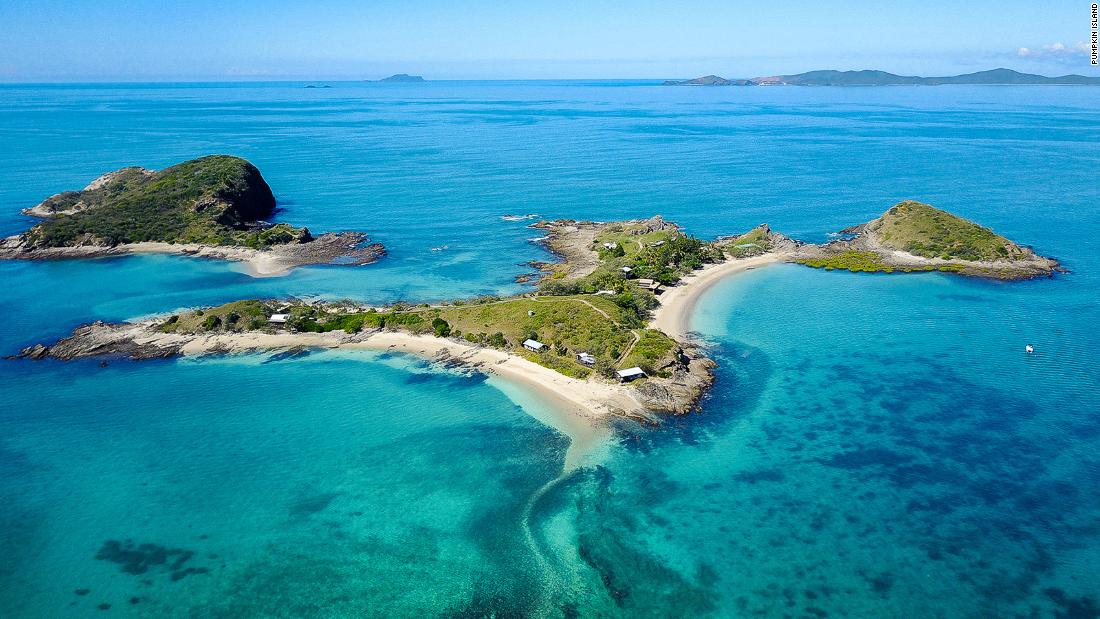 (CNN) — A fully serviced private island in Australia’s Southern Great Barrier Reef is now on the market — just in time for those who want a place to ride out the Covid-19 pandemic.

Pumpkin Island, located 14 kilometers or a 30-minute boat ride off the coast of Queensland, comes with a private beach, a bay filled with fresh oysters and a self-contained resort with renewable energy sources.

The island is currently owned by Wayne and Laureth Rumble, through their company Sojourn Retreats.

“It was the ideal place to spend lockdown during the pandemic,” the couple tells CNN Travel via email.

“It is secluded, private and yet you have total freedom to move around, be outside … our kids were playing in the playground, on the beach and life just felt very normal until we switched on the news.”

Australia’s first “beyond carbon neutral” island — offsetting 150% of its annual greenhouse gas emissions — and one of the country’s most sustainable hotels, Pumpkin Island features five self-contained beach cottages that sleep up to 34 guests.

In addition to using wind and solar power, the island has a filtering system that turns rainwater into drinking water.

Other facilities include two oceanfront bungalows (filled with a games room, library and lounge), a licensed bar and lounge area, two registered moorings, a helicopter pad as well as a custom-built 36-passenger boat.

A separate oyster lease can also be bought, “allowing guests to shuck oysters off the rocks,” says the listing.

Won in a poker game, made famous in a beer ad

The island is home to five beach cottages and two ocean bungalows.

Prior to 1961, the island was an oyster farm that belonged to a man called Snigger Findlay.

“(A couple by the name of) Roger and Merle Mason fell in love with Pumpkin Island, but Snigger did not want to sell it. So when Roger challenged Snigger to a game of poker, he said that if he wins Snigger would have to sell the island to Roger. So Roger won and bought the island for £60,” say the Rumbles.

The island was leased by a Queensland beer company between 2012 and 2015 to promote their beer Castlemaine XXXX and was renamed XXXX Island during that period.

“Their customers could win an all-expenses-paid holiday for themselves and three friends to the island if they found the golden beer can in a case of beer. Almost like Charlie and the Chocolate Factory,” say the Rumbles.

The couple say they are selling the island because they would like to move closer to their family in New Zealand.

“We would love to hand the island over to someone who would care for it as much as we do. It is a very special place and ideally, the new owners would find as much joy in the beauty and breathtaking nature as we have.”

Ant-Man And Heineken Join Forces In First Super Bowl Commercial For Non-Alcoholic Beer
Mayakoba, Mexicoâs Timeless Resort Gets Better and Better with Age
The Silver Oak Release Day Events Are One Of The Keys To Its Success
Havana Cubaâs Voya Boutique Hotel: For the Culturally Curious Traveler
A Partnership Between Target And Black-Owned Family Farms Brings Sustainable Cotton Products To Consumers