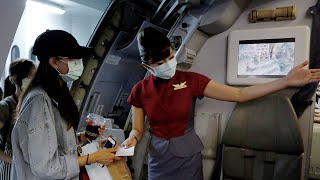 Trips abroad are currently all but impossible for residents of Taiwan, but one airport may have come up with a stop-gap solution for those missing the thrill of travel.

A group of eager competition winners turned up at Taipei’s Songshan Airport on Thursday to take a flight to nowhere, navigating check in, passport control and security before boarding a plane that never left the runway.

After showing their boarding passes at the gate, the 60 ‘passengers’ sat for 15 minutes on a grounded Airbus A330 owned by China Airlines, chatting with flight attendants before disembarking again.

They were also given the freedom to explore parts of the terminal, eat snacks at one of the airport’s restaurants and shop in the duty-free store.

The idea has proved overwhelmingly popular, with some 7,000 people entering their names into a prize draw on Facebook, and the airport has now scheduled several more fake flights over the next few weeks for some of those who missed out the first time round.

“I really want to leave the country, but because of the epidemic lots of flights can’t fly,” said Hsiao Chun-wei, 38, who attended the first event with her young son.

For many of Taiwan’s citizens, the half-day experiences offer a chance to relive the excitement of departing for a holiday abroad, but for the people who run Songshan Airport, it has been an opportunity to boost the prestige of the country’s third busiest air hub.

“People who didn’t have the opportunity to take international flights at Songshan can use this chance to experience and learn more about the boarding process and relevant service facilities,” said Chih-ching Wang, the airport’s deputy director.

Taiwan’s lockdown, enforced in response to the coronavirus pandemic, has afforded airport chiefs to embark on an extensive renovation programme, and the campaign is partly intended to show off the gleaming new facilities to members of the public.

It is also a chance for China Airlines to unveil new in-flight hygiene practices, and visitors on board the fake flights are treated to a live demonstration of cabin crew sanitising the plane’s interior.