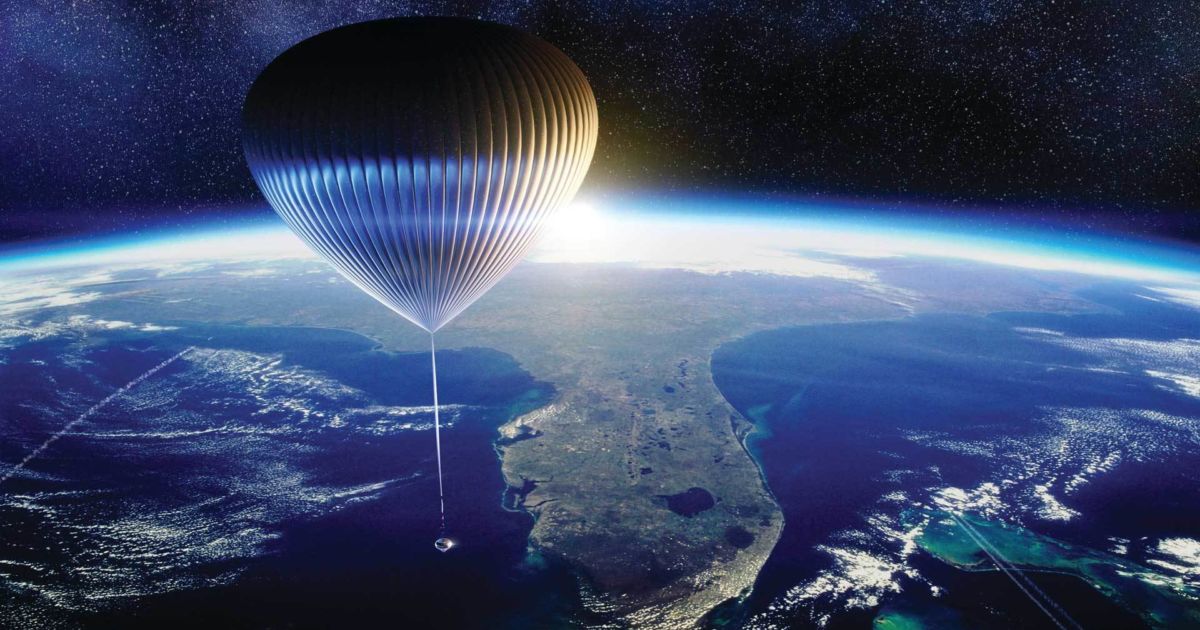 Adventure-based tourism looks for ways to provide new perspectives of our world, and one company may have everyone else beat.

Space Perspective, the “off-world travel company,” boasts that space tourism is on the horizon, literally.

Space travel tourism is still a thing of the future, but as early as 2025, passengers can journey one-third of the way to space in the Spaceship Neptune. That’s 19 miles above the earth, higher than where U2 spy planes fly, and high enough to see the curvature of the planet’s atmosphere. For $125,000 a ride, that is.

Spaceship Neptune is a high performance “space balloon.” It is made up of a balloon the length of a football stadium and a pressurized capsule with 360-panorama windows that seats eight passengers and a pilot. The capsule will be comfortable and accessible for people in various physical shape. And of course, it will be equipped with a refreshments bar and bathrooms.

The six hour journey leaves before sunrise from NASA’s Kennedy Space Center in Cape Canaveral, Florida, where the Operations Center will be at the Launch and Landing Facility (LLF).

The balloon will gently rise at about 12 miles per hour for two hours using hydrogen gas, cruise in the direction of the day’s prevailing winds for two hours 100,000 feet above 99% of the Earth’s atmosphere, and descend for two hours to land in the ocean where a ship will collect the passengers.

Spaceship Neptune is regulated by the FAA Office of Commercial Spaceflight and has near zero-emissions. It is designed from similar NASA-proven technology to operate near the vacuum of space. It also has a partially pre-opened parachute as a backup descent system.

“Space Perspective is bringing a fundamentally new capability to the Cape, which will enhance the offering we have in Florida for space-related research and tourism,” said Space Florida President and CEO Frank DiBello.

If balloon space tourism sounds familiar, it’s because it’s building on a similar idea, World View, expert space entrepreneurs and husband-wife duo Taber MacCallum and Jane Poynter unveiled in 2013. Other space-related projects between the pair include designing and being crew members of Biosphere 2 in the 1990s, sending Google executive Alan Eustace in a record-setting balloon parachute dive in 2014, and advertising with KFC via a chicken sandwich in 2017. Now, as Founder and CEOs of Space Perspective, they are trying again.

Poynter said, “We’re committed to fundamentally changing the way people have access to space – both to perform much-needed research to benefit life on Earth and to affect how we view and connect with our planet.”

Space Perspective isn’t just about leisure. The company is working with NASA and is a preferred partner for the Citizen Astronaut Program, working with the nonprofit Space for Humanity, which will pay for the flights of citizens to serve as space ambassadors.

The first un-crewed test flight is scheduled for early 2021 where Spaceship Neptune will fly research payloads to the edge of space. Future launch sites around the world may be in Alaska, Hawaii, and other international spaceports.

Katelyn Milligan is a Budget Travel intern for Summer 2020. She is a student at Purdue University.

Not a fan of cruising? The hack that could change your mind
Antibiotics Use In Farm Animals Is Growing—Here’s Why It Could Pose A Danger To Humans
Here’s where mainland Chinese traveled overseas for the Lunar New Year
Looking For Non-Alcoholic Drinks? Japanese Tea May Be Your Perfect New Companion
Welcome To The Year Of Yaupon Tea