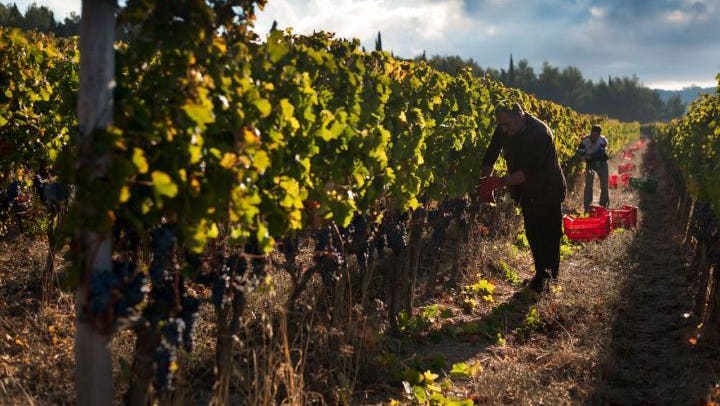 As Elena Pozzolini carefully walks through her vineyards, she takes in each vine like it is an individual “person” that may need something different from its neighboring vines. When she is at the highest point in her vineyards, 1,300 feet, she has an amazing view of the Mediterranean Sea with its deep sapphire blue color; although her vineyards are further from the Sea than most other Bolgheri vineyard properties, around one mile more due to their much higher elevated spot as around “80% of Bolgheri producers are basically at sea level”, it gives them full exposure to the intense sea breezes. There she oversees their various vineyards where many are terraced on the side of a hill with 12 foot high walls that are made from the same stones that make these Tuscan vineyards so special.

Elena is the CEO and winemaker at Tenuta Sette Cieli a winery established in 1998 with their first official labeled vintage in 2004. Tenuta Sette Cieli was founded by owner Ambrogio Cremona Ratti and his mother. Actually their original idea was to buy land near the coast of Tuscany to breed horses but then Ambrogio noted that they “quickly realized” that they had a very special place for wine after they started doing analyses. That led them to planting vineyards on their 17 acres and in 2006 he bought seven more acres that he planted giving them 24 acres in total. Their land is partially within the Bolgheri boundaries and partially outside of it. Their top wines, Indaco and Scipio, come from their higher up estate vineyards yet they had another wine, Noi 4, that is sourced from other Bolgheri estates but with a recent purchase of a vineyard right below them they will be able to slowly phase out the purchased fruit for their own estate vineyards.

But it is ironic to think that their Noi 4 is given Bolgheri DOC status and their top two wines are only IGT Toscana. Perhaps it is not so paradoxical though, considering that many of the great Bolgheri producers, dubbed by the media as making ‘Super Tuscan’ wines, were sold as IGT Toscana before the DOC was approved for red wines in 1994. So in a way it is going back to the roots of making great wines even if it does not meet the exact guidelines of higher quality classifications.

Ambrogio says that he has always had a good relationship with their famous neighbors such as Sassicaia (right below their own vineyards) and Ornellaia. Their first consultant, who made their first vintage, was Thomas Duroux – the first wine director of Ornellaia who is now the director of Château Palmer. Unfortunately Ambrogio’s mother passed a while back and once he completely took over the company in 2012, he wanted to find someone with “expertise and passion” to focus on the vineyards and who was a dynamic person with lots of international experience yet also Italian; that person was Elena Pozzolini. “I found someone who fell in love with the vineyards and the place and for me that was really important”, exclaimed Ambrogio.

But also, as he noted, Elena has international experience in Argentina, Australia and California so she has an open mind and she proactively researches various aspects of the vineyards and winery and is innovative by her very nature.

One of Tenuta Sette Cieli’s many projects is selecting their own native yeasts from their vineyards in collaboration with the University of Pisa. This is a project that started four years ago with around 40 different yeasts chosen from their grapes and after trials with each set of yeasts going through fermentation in small individual vats, they worked themselves down to four native yeasts. Before that time they have always used indigenous yeasts but the idea of selecting four native yeasts that they felt are best in representing their sense of place gives them more authentic options when they need to add more to help a spontaneous fermentation that is having trouble. And the Tenuta Sette Cieli vineyards have been organic from the beginning yet they just started the certification process in 2015 – they do not use it on their label as it is a built-in philosophy that they have always had from the start.

The idea behind one of their top wines Indaco is to represent a classic Bordeaux blend when Malbec was at one time a very important part of Bordeaux before Merlot took over its plantings; and so Indaco is one third Malbec, one third Cabernet Sauvignon and one third Merlot. Elena had already worked with the variety in Argentina and she was excited to work with it again in Bolgheri. She admitted that her first vintage of trying to harvest the grape did not go the way she thought. “We had a group of women who were picking the leaves before the harvest and they were breaking the skins [of the Malbec] because it was so delicate”, Elena noted. And she realized that they had too much rain that year and she needed to get the berries smaller with thicker skins and less compact by adding a competitor for water in the soil – and so she planted barley between the vineyard rows.

Another interesting aspect of how they deal with their Malbec vines is that they remove the leaves on the vines earlier than normal so the grape skins get used to the softer sunlight earlier in the year before the sun becomes too strong; Elena described it as like a base tan that helps to protect the skin from future exposure to the sun. But she is pleased with the Malbec that they are getting now with their higher altitude, cooler wines balanced by plenty of sun as it is very aromatic with plenty of acidity.

A rare beauty that Tenuta Sette Cieli produces is a 100% Cabernet Franc wine under their Scipio label that is not produced every year; they did not make 2011, 2012 or 2014. But as climate change starts to bring more warmth and sunshine, they are finding their Cabernet Franc grapes (as well as Cabernet Sauvignon) are reaching a more ideal ripeness considering they are in a cooler area of Bolgheri. They do not want their Cabernet Franc to be dominated with pyrazines (compounds that create vegetative flavors) that would cover the rest of the nuanced aromas. One of the many benefits of having a cooler and typically drier climate due to the intense winds, besides low disease pressure, is that they can give their grapes a longer growing season. They can harvest up to a month later than most of the other Bolgheri vineyards below them and that allows for the “elegance and more delicate aromas to develop” Ambrogio added.

Who Does the Hard Things in Life?

Despite having the benefit of cooler weather during the times of climate change, as many of the other Bolgheri producers are looking to buy vineyards on the hill now, there is always a tremendous amount of work to be done to keep up with Mother Nature as well as to introduce the world to Super Tuscan wines that are higher in acidity than the norm with a greater potential for aging – one of the reasons Tenuta Sette Cieli will release their wines a year later than other Bolgheri wineries. And in addition, the limestone filled vineyards with huge stones that help to drain the water to allow the vines to struggle to create higher quality, more concentrated wines can be burdensome to deal with as a winemaker who is trying to find an ideal balance as the soil is poor in regards to nutrients. The vines are always on a razor’s edge and if they go too much in one way then they barely make any fruit. But with Elena constant nudging she finds a way to balance each one on a tight rope that will yield exquisite fruit with finesse on the nose and lots of flavor on the palate.

In regards to Ambrogio trying to find the right person to take over Tenuta Sette Cieli, it seemed he would need someone who would want to take on a lot of tough obstacles every year because they knew the special potential of the vineyards. Who does the hard things in life? Yes, those who can but ideally those who also wake up with vigor because they believe in the fight every day and that person is certainly Elena Pozzolini.

Elena described 2016 as one of the most irregular in the last ten vintages. It was hotter than 2015 but they received enough rain to get them through the extremely hot summer. She is very happy with the quality but it was a lot of thinking on one’s feet in the vineyards as the vintage was atypical. The labels below are temporary labels as the wines were tasted before reaching the market and hence why the “6” is written by hand in the “2016”.

2016 Tenuta Sette Cieli, ‘Indaco’, Toscana IGT, Toscana IGT, Tuscany, Italy: 33% Malbec, 33% Cabernet Sauvignon and 33% Merlot. A beautiful bouquet of violet and roses that had hints of star anise that gave fleshy flavors of blueberry compote with an intense stony note on the expressive finish that added elegance to the rich fruit.

2016 Tenuta Sette Cieli, ‘Scipio’, Toscana IGT, Tuscany, Italy: 100% Cabernet Franc. A stunning expression of Cabernet Franc with complex notes of dried autumn leaves, ripe raspberry and freshly grated cinnamon sticks that was nimble and lively on the palate with flavorful wild berries and graphite that had a linear drive that gave this wine a very, very long finish.

Luxury Lifestyle Awards Reveals the Best of the Best in Hospitality Industry in the TOP 100 Hotels & ResortsÂ
Valentine’s Day Gift Guide: The Best Italian Gifts For Pasta Lovers
Fresh Take: Tyson Heir Settles With Guilty Plea, And Cracking Open The Issue Of High Egg Prices
What’s Next For The No-Alcohol Market?
Visit the Home of Punxsutawney Phil for Groundhog Day