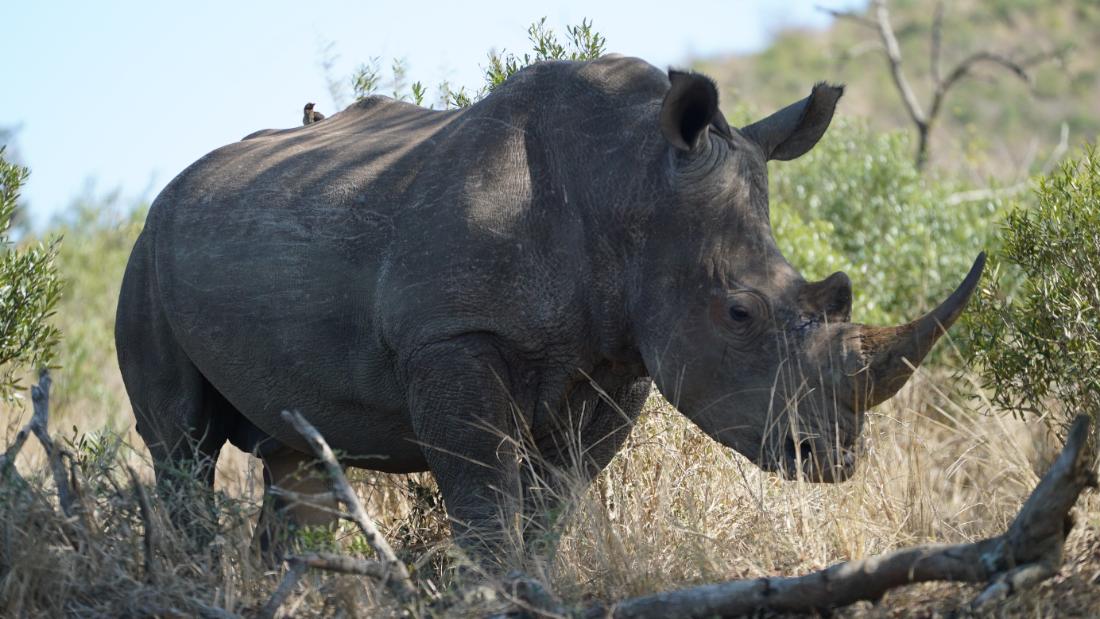 (CNN) — The southern white rhino has been to the brink of extinction and back, but even as it continues to be under threat from poachers, it’s survival is largely thanks to the conservation work of one park.

Today, most of these rhinos can trace their ancestry back to the Hluhluwe Imfolozi Park (HiP) in KwaZulu-Nata, South Africa.

In the late 19th century, the southern white rhino was on the brink of extinction due to game hunting.

“All southern rhino throughout the world, the gene pool comes from this park,” explains Richard Penn Sawers, park manager at HiP, known as the home of the rhinoceros species.

“It is a species which has huge importance in the conservation world.”

Unfortunately, a new threat emerged just under a decade ago, when poachers began targeting the rhinos for their horns.

Made entirely of keratin, a protein found in hair, fingernails and animal hooves, rhino horn has long been used as a traditional medicine ingredient in countries like China and Vietnam.

“It’s worth a great deal of money,” adds Sawers. “It’s worth more than gold.

“There’s a very high demand for it, and we are experiencing severe threats on our rhino population at the moment.”

As a result, the 96,000-hectare park, the oldest proclaimed wildlife reserve in Africa, has found itself battling to protect the rhinos once again.

While the rangers here have long been trained to deal with bush meat hunters brandishing assegais (spears) and bush knives, poachers armed with guns was relatively new territory for them.

“I think the scourge of rhino poaching migrated South from the Northern parts of Africa where the rhino had been wiped out.”

International trade in rhino horn has been banned for years, but poachers can earn a huge amount of money from selling it on the black market.

“There was a time where everybody thought the rhino would not survive because of the poaching that was taking place,” says Tumelo Matjekane, a project manager at Peace Parks Foundation, a non-profit organization that assists with setting up transfrontier conservation areas in southern Africa.
In order to tackle the organized criminal gangs, HiP was transformed into South Africa’s first “Smart Park.”

Integrated surveillance technology, including smart fencing, has been installed in the grounds of the reserve, along with camera traps to call attention to intruders.

The reserve was previously losing between 10 to 15 rhino per month before the new measures were brought in.

“We consider this to be a war,” explains Sawers. “So, in any war situation, rapid response and rapid detection is key.”

The park even has an intelligence gathering base, the HiP Nerve Centre, which keeps track of information picked up by the cameras.

“They’re [the camera traps] all linked to the internet and they send their photographs directly to the Nerve Centre,” explains Sawers.

“So, we know exactly where the camera is and where the photograph comes from. And we can react very, very quickly.”

The team use a helicopter so they can reach targeted areas swiftly.

It was recently deployed just eight minutes after being given the green light, reaching its intended location around seven minutes later.

“Without the technology, it would have probably taken in the region of two hours,” adds Sawers. “And by then it would have been too late.”

Of course, such advanced technology is costly, the Peace Parks Foundation apparently contributed more than 10.6 million South African rand (around $600,000) towards the rhino protection program.

Sawers says he’s extremely encouraged by the results so far.

“Where we were losing between 10 and 15 rhino a month, that has stopped completely,” he says.

For Sawers, whose great-grandfather was a park ranger here, protecting the rhinos is too important for any level of complacency.

“The preservation of the southern white rhino is critical,” he adds. “We cannot allow it to disappear. It would be too awful to contemplate.”

How Brazil Can Use Domestic Fertilizer Production To Ensure Its Continued Role In The Global Food Supply
Cinnamon Improves Your Memory And Cognition
Fever-Tree And It’s Co-Founder Tim Warrilow Are Still Challenging Industry Norms
Not a fan of cruising? The hack that could change your mind
Havana Cubaâs Voya Boutique Hotel: For the Culturally Curious Traveler