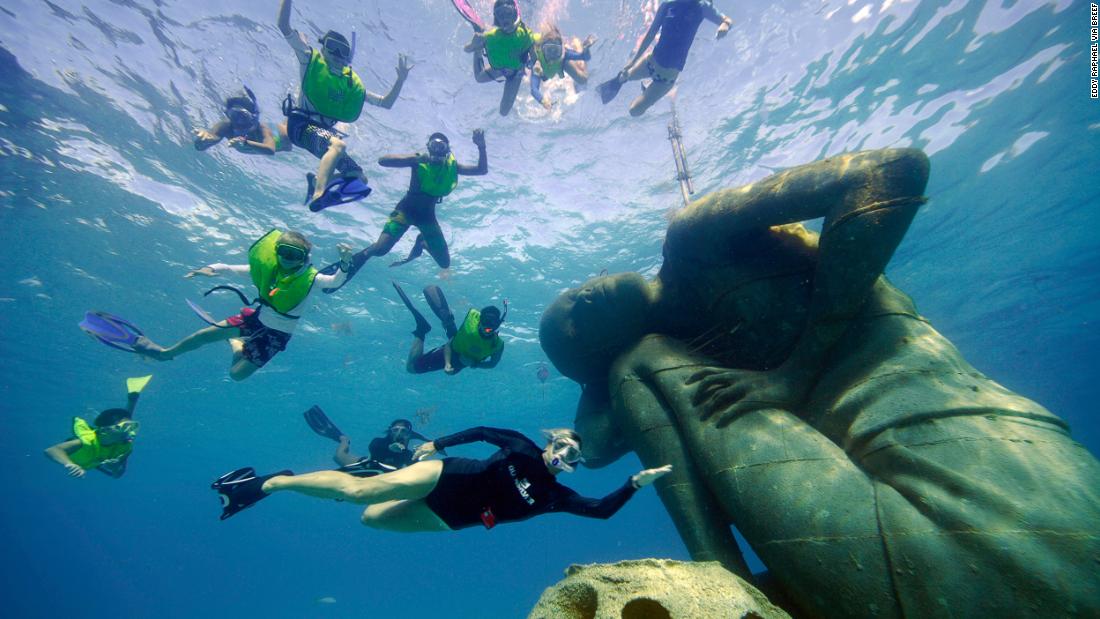 Started in 2014, BREEF (Bahamas Reef Environmental Education Foundation) commissioned three artists to create sculptures that could live beneath the waves.

The project was the brainchild of Tynes, who had been inspired by Taylor’s under-the-sea oeuvre. It created an instant tourist attraction that has substantive, positive environmental impact on marine life.

DeCaires Taylor recounted their time together.

“We all worked in the same yard, for around six weeks” he told CNN Travel by phone. “We lived in it together. It was quite hard. It was in rainy season, searingly hot with monsoon rains. It was quite a tough project to build.”

In addition to attracting visitors to this one-of-a-kind snorkel and scuba experience, BREEF has also been growing endangered Staghorn coral since 2015 in their coral nursery. In an email to CNN Travel, a spokesperson for BREEF wrote, “These corals are being outplanted to rehabilitate our coral reefs, and more coral means more fish.”

DeCaires Taylor, who is at work on another project for the Great Barrier Reef in Australia, said of this commission, “I had this concept that I’d been trying to realize for some time, it was quite ambitious, and the Bahamas have such incredible water. It’s so crystal clear.”

He liked the idea of empowering the local community to care for their natural resources and their reefs. Then came the idea for the sculpture itself, “a young child, holding up the sea or supporting the sea in an Atlas-like pose. I sculpted a young girl called Camilla, who went to school there. It’s the largest one I’ve ever made.”

Be sure to visit

As soon as the Bahamas reopens to tourists, the submerged magic of the sculpture garden awaits, as does the island’s warm, inviting hospitality.

“The best thing about the Bahamas is they’re the nicest people I’ve ever worked with. It was hard, grueling work, but they made it so enjoyable. Everyone is so nice.”

Not a fan of cruising? The hack that could change your mind
Spend a Magical Valentineâs Day at Chateau du Sureau in Yosemite
Fresh Take: The Truth About Gun Violence, Food Insecurity And Food Workers
Tourism is roaring back in China. But the $6 trillion consumer market is digging itself out of a deep slump
Ant-Man And Heineken Join Forces In First Super Bowl Commercial For Non-Alcoholic Beer