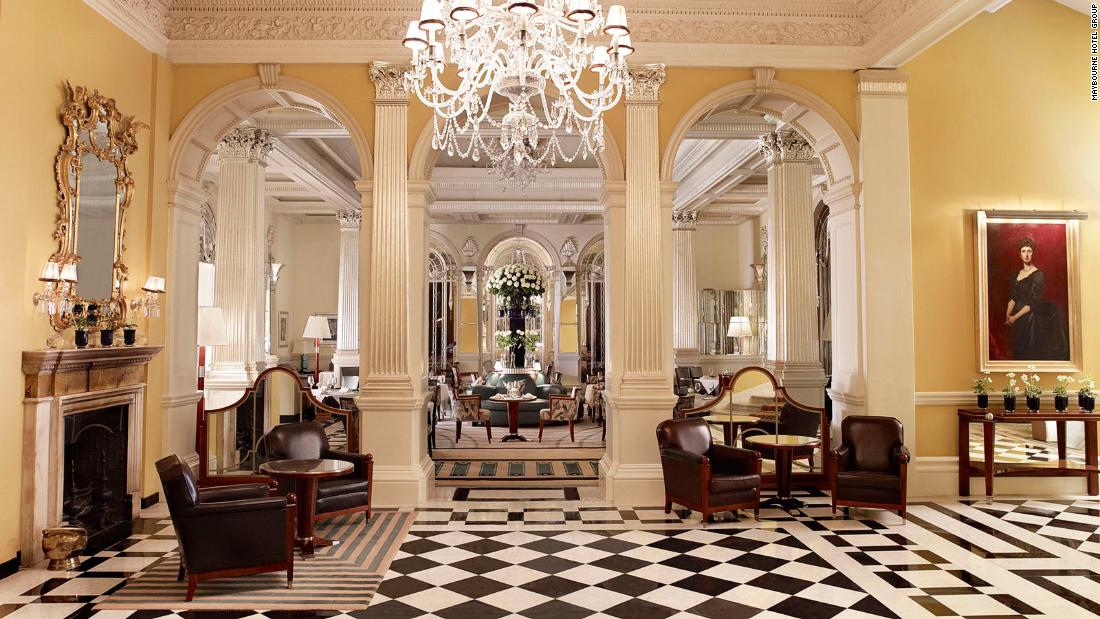 (CNN) — To say the Covid-19 pandemic has had a significant impact on the hotel industry is something of an understatement.

Countless big names were forced to close due to safety concerns and plummeting occupancy rates, with many yet to resume business again.

However, some chose to open their doors to doctors, nurses and other key workers fighting against the virus that’s taken the lives of at least 500,000 people around the world so far.

At least 225 rooms in the 52-story Midtown Manhattan building were made available for a seven-night minimum stay, with the team implementing various protocols, including a single point of entry where each person’s temperature is checked.

Many other top hotels followed suit, including the New Yorker, A Wyndham Hotel, which housed a number of medical workers deployed to the city to fight against the virus.

Shadoe Daniels, a physician assistant from Pennsylvania who stayed here for four weeks throughout April, says bedding down at the historic hotel helped to take the pressure off him and his colleagues.

“Honestly every day was exhausting,” he tells CNN Travel. “But the New Yorker was very comfortable and convenient.”

“We all had traveled from a long distance away, so we needed a nice place to stay.”

But this was far from a typical stay at the historic Art Deco-style hotel situated in Midtown West.

While there was little change to its exterior, the New Yorker looked very different inside.

For instance, its famous ballroom was transformed into a disinfecting zone in which workers would sanitize their hands as well as their shoes, before taking the elevator up to their room one person at a time.

In order to minimize the risk of infection, the New Yorker and other hotels were not able to offer room service or even a restaurant service. Instead, workers were usually provided with meal boxes, which they brought up to their rooms.

Daily housekeeping services were also shelved, however, guests were supplied with an appropriate amount of linen and towels at the start of their stay.

This was a huge relief to traveling physician Angela Mattke, who found herself taking an extended stay at the slightly more low key Residence Inn by Marriott Cleveland Mentor after flying into Cleveland for what was expected to be a short trip.

Although Mattke has stayed at the same hotel several times in the past, she admits to being afraid to let anyone into her room at all when she returned from working nights at the local hospital emergency room.

“I let them in once a week to change the sheets,” she tells CNN Travel. “And I would have fresh towels.

“But otherwise I really tried to keep them out, just in case I brought something home from the hospital. Even though I tried very hard not to.”

After a week, she realized she wouldn’t be able to return home for a while due to the potential risk of picking up the virus and spreading it to her family and/or air passengers while flying home to Atlanta, and ended up staying for around nine weeks.

Like Daniels, Mattke says the security of the room helped her to feel slightly more at ease while being away from all her family and friends during the height of the virus.

“I was probably the only person in America who was not crazed looking for toilet paper,” she adds.

“They took good care of me.”

Claridge’s in London provided rooms for healthcare workers days after shutting its doors for the first time.

Over in London, Claridge’s, a five-star hotel known for hosting visiting royalty, opened to around 40 key medical workers just days after shutting its doors for the first time in its 200-year history.

“Even in the war we didn’t close the doors, so it was quite a historic moment in our history,” says Paula Fitzherbert, director of communications for the Maybourne Hotel Group, which owns London hotels The Connaught and The Berkeley, as well as Claridge’s.

“As a London institution, you can’t just take the city for the good bits, you have to be there for the bad bits too, and help to support.”

But while the team here felt honored to be hosting healthcare workers who were essentially putting themselves at risks to help save lives, they were disappointed not to be able to provide the usual standard of service a guest at the hotel would receive.

“We had to accept early on that we’d only be able to offer a comforting refuge,” Fitzherbert tells CNN Travel.

“It wasn’t going to be a five-star luxury hotel service, because the hotel wasn’t in operation.

“It was very alien for our staff not to be able to extend the normal level of hospitality, but we tried our best to make it as comfortable as possible.”

Claridge’s, which is located in Mayfair, also provided meals in boxes and scaled down cleaning services to limit contact between staff and guests.

As guests were staying for longer periods of times than usual, this wasn’t much of an issue, and rooms were thoroughly cleaned after each check out and kept empty for three days between guests.

“We asked for longer stay doctors or nurses, so we weren’t having to clean the rooms every day,” explains Fitzherbert.

“The staff would knock on their doors and leave their meals outside.”

Such services proved to be a much-needed lifeline for workers brought to the UK capital during this period, as well as local workers impacted by limited public transport or concerned about infecting loved ones while working with Covid-19 patients.

No-one has a better understanding of this than Teena Ferguson, a senior manager for the Imperial College Healthcare NHS Trust in London, who found herself in the unusual position of having to find hotel rooms for hundreds of staff.

“In the last nine weeks, my team has basically become a call center for accommodation,” explains Ferguson, who has booked around 1,800 rooms for doctors and nurses working in high risk areas since March.

A local partnership was soon formed between the Imperial College Healthcare NHS Trust and a number of hotels including the Hilton, Claridge’s and the Hyde Park International, in order to ensure rooms were available to staff based at West London hospitals.

Nurses temporarily staying at the New Yorker Hotel during the pandemic were treated to special gift bags.

Jamie McCarthy/Getty Images for From Fashion With Love

“The hotels have been a home away from home for all the doctors and nurses staying there,” Ferguson adds.

“Especially at the beginning when no-one knew what the pandemic meant or what it would bring.”

Remco Norden, general manager at the Hilton London Metropole in Edgware Road, says his team were initially intimidated by the prospect of having to look after medical workers while the city was almost at a complete standstill.

“We were anxious and not sure what to expect after the full lockdown [in London],” Norden explains to CNN Travel.

In order to make sure his workers felt safe, Norden created working “bubbles” in which the same staff would work four days on and four days off.

Meanwhile all of the communal areas, such as the lobby bar and restaurant, were closed, bringing about what he describes as an “apartment complex” vibe.

“The atmosphere has been completely different,” adds Norden, who says the hotel has gone from having a thousand people in the building each day to just a few hundred.

Unlike Claridge’s, the New Yorker and the Four Seasons New York, Hilton London Metropole has remained open to visitors the entire time, so staff were dealing with both standard guests and medical workers simultaneously.

“The other guests were all people who were stranded, so everyone at the hotel stayed for at least a month, which was very unusual,” Norden adds.

“It turned from a corporate machine to a family-style atmosphere between the team and our guests.”

Four Seasons New York was the first hotel in the city to offer rooms to medical workers.

While the health care workers are beyond grateful for the rooms, Ferguson believes the hotels have provided them with much more than just a fancy roof over their heads.

“It’s not just about getting us a room at a very reduced rate, if not free,” she says.

“The hotels have been very thoughtful. Some have made notes of birthdays and put little goodie bags with a mini bottle of champagne outside their doors.

“They’ve really gone above and beyond.”

According to Ferguson, over 100 of her workers were evicted by their landlords during the pandemic, so the accommodation has been particularly invaluable to them.

“We had about 117 NHS workers who were homeless,” she adds. “That was really quite devastating for them.

“To have to come into work and be under that kind of pressure and then not have anywhere to stay…. So, it made a difference to their mental health.”

Thankfully the Covid-19 situation in cities like London and New York appears to be under control for the time being.

Transmission cases have largely dropped and many workers are now able to return to their homes, so the need for hotel rooms has lessened, particularly now that public transport is running regularly again.

“The fear and the risk has greatly reduced,” says Ferguson. “So the service isn’t required for as many people as it was.

“By the end of June, no-one should be in a hotel.”

While the experience has certainly been of benefit to the medical workers concerned, it’s also proven to be a huge advantage to the hotels.

Many of the measures that were initially brought in temporarily, such as ditching buffet services and offering contactless check-in and checkout, have become standard practice in hotels around the world.

“Things have now been given a formal name,” adds Norden.

The team at Claridge’s say being tasked with looking after health care workers battling Covid-19 cases has helped them to prepare for what lies ahead when they’re given the go ahead to reopen.

“It’s been a very special moment in time and something that will go down as a very proud moment for us,” adds Fitzherbert.

“We hope everyone can come back and have a glass of champagne and experience the hotel properly when we’re able to offer them the chance to.”

Hong Kong will give away half a million plane tickets. Here’s who can get them first
Southwest faces Senate hearing next week following holiday meltdown
Where to Kick off Your 2023 Summer Travel
Fever-Tree And It’s Co-Founder Tim Warrilow Are Still Challenging Industry Norms
2023’s Best Cities for Kid-friendly Vacations