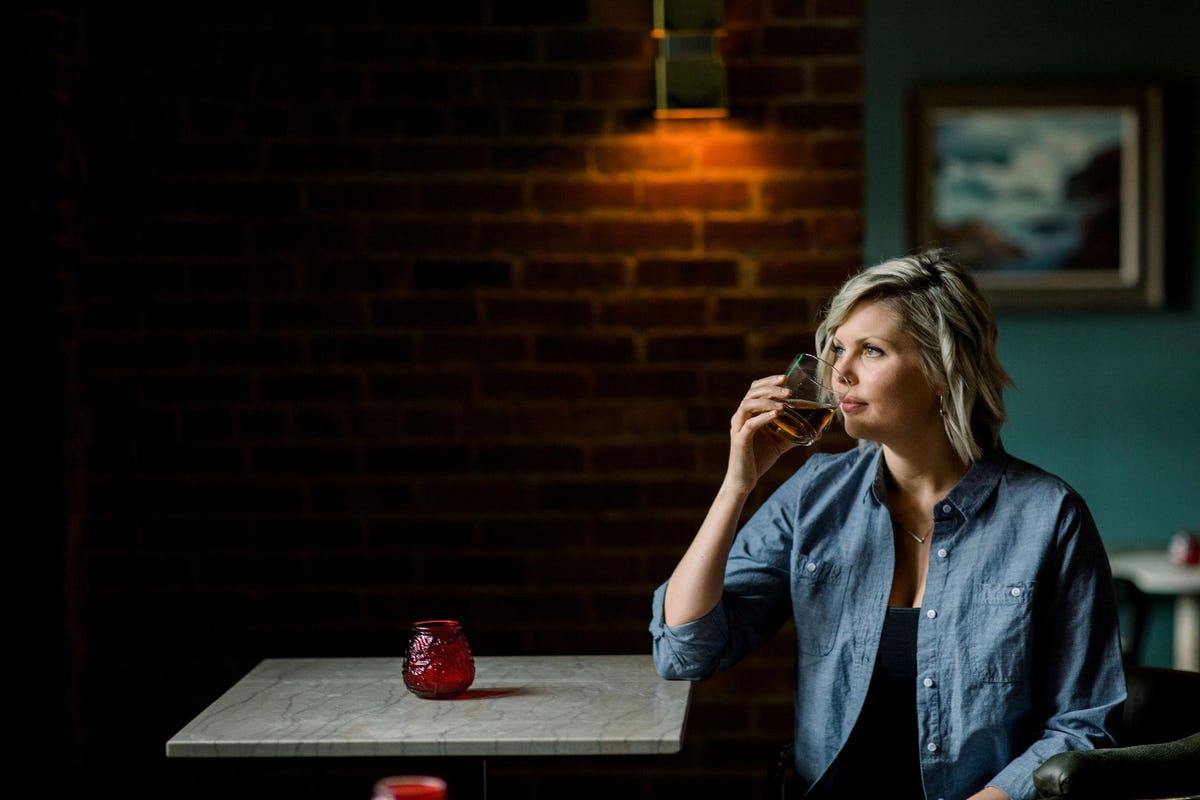 Peyton Manning and Andy Roddick launched a bourbon. In the whiskey world, another celebrity whiskey draws the cynical, “big whoop.”

Whiskey geeks usually view celebrity whiskeys as additional cash cows for people who don’t need the income. But this one is different. It’s special. But not because of Manning or Roddick.

Their blender changed the landscape of American whiskey before Manning retired from the NFL, and now she’s attacking the little known business of whiskey consulting.

Nearly a decade ago, inside the public relations office of Brown-Forman, a young woman reached out her hand and introduced herself (back when we could shake hands). “I’m Marianne Eaves,” she said, and her PR rep noted that she was the new Master Taster for the parent company that managed such brands as Woodford Reserve, Jack Daniel and Old Forester.

After this brief introduction, Eaves went on to impress me unlike anybody before or since in American whiskey. For her age, 27 then, she knew more about the chemistry of whiskey than some master distillers, an often overused title that’s given out like candy these days.

At that time, Brown-Forman was grooming Eaves to become a master distiller.

As a University of Louisville chemical engineering student in 2009, Eaves was considering two internship options—one for a renewable energy company and the other for Brown-Forman. “I was thinking about all the different things I can make with corn and thought: ‘Why make fuel when you can make bourbon?’” She said at the time.

But she’s faced much more criticism than many of her male colleagues.

When she left Brown-Forman in 2015 to become the master distiller at Castle & Key, the first woman to have “master distiller” on a Kentucky distillery business card, keyboard warriors criticized Eaves, saying she hadn’t earned the same title worn by Parker Beam, Jimmy Russell and Jim Rutledge.

So anytime I talked about her role at Castle & Key Distillery, I had to answer people’s questions, “Is she really a master distiller?” There’s not another distiller in this country I’ve had to constantly defend for their well-earned position. Why?

Each dose of criticism, Eaves handled with class and noted all she wants is to be judged for her whiskey.

Then, Eaves left Castle & Key and embarked on a consulting career that could very well reshape the whiskey industry’s cottage segment of consulting.

See, when Dave Pickerell passed away, the industry lost its consulting face. While many qualified and great consultants like Larry Eborsol assisted brands, they rarely became marketing faces of said brands. Pickerell would set up the distilling equipment and lend them his master distiller title for a little equity in the company. He had more than 100 consulting credits to his name and a few called him their master distiller.

Many see similarities to Pickerell with Eaves’ trajectory. Could Eaves, who’s currently consulting on five distillery projects, become the next big distilling consultant?

“Marianne is well poised to be the ‘next big thing’ in the craft whiskey world,” says St. Augustine Distillery co-founder Michael K. Diaz, who worked with Pickerell and hired Eaves as a consultant. “Her education, experience and work ethic all combine to provide a real benefit to the craft distiller. … Dave and Marianne are completely different people with different approaches. Having said that, both have very strong technical, scientific backgrounds and have spent time with large, high-volume producers. Dave certainly had more time and experience, especially on the promotion side of the business (nobody is better at that than Dave was), but Marianne is extremely knowledgeable and competent on the production side.”

The first public gig in her consulting career?

Sweetens Cove is Eaves’ first brand to hit the shelves, and she already has a few more in the works. But it may be difficult for her to replicate the quality of this whiskey.

She had access to some 100 barrels of 13-year-old Tennessee bourbon most likely from the George Dickel Distillery. The whiskey’s complex, velvety and offers beautiful hints of chocolate and fruit.

Here’s the thing that makes the blending so difficult with a product like this: There’s a lot of this whiskey on the wholesale market, meaning the distillery puts the liquid up for purchase to other distilled spirits plants. And Dickel’s profile is distinct, making it harder for a sourced Tennessee bourbon to stand out.

But blenders like Barrell have found ways to have a house profile without tasting like George Dickel products. Eaves shares this blending gift of taking another distiller’s liquid and making a unique whiskey brand.

That’s why Sweetens Cove is such a win for Eaves’ first product. While she did not distill the liquid, Eaves pieced together a batch that’s both delicious and unique.

“I always look for ways to create balance while celebrating what the barrels have to offer,” Eaves says. “It was great juice, and through blending I was able to come up with some really fun flavor profiles. All 5 batches are different, celebrating the age of the bourbon and highlighting the nuanced flavors they managed to present even above the oak after all that time.”

Sweetens Cove also broadened her portfolio of styles. At Brown-Forman, she blended Old Forester 1870. At Castle & Key, she distilled Kentucky bourbon, rye, vodka and gin. Currently working on a brandy in California, Eaves now has significant work in many major spirits categories. With Sweetens she can check off Tennessee bourbon, which for many is whiskey’s best kept secret.

“It’s about time for people to give Tennessee bourbon the credit it deserves and for an ultra-premium brand to help raise the tide,” she noted.

As for Eaves, Sweetens Cove has been good to her, giving her the national spotlight and recognition throughout the industry. There’s more blending to do with the brand, she says, but that’s not all she’s doing.

“I’m working on making my dream for a mobile laboratory come to life,” Eaves says.

Coming to a town near you, Eaves. The distiller. Blender. Consultant. And wherever she goes, the bourbon usually gets better.