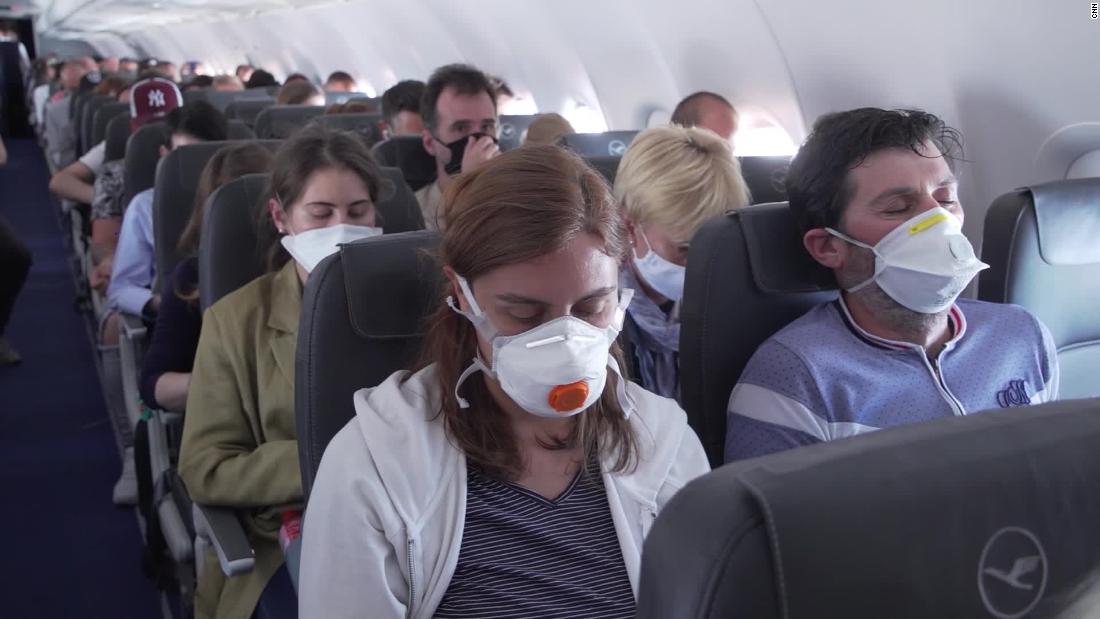 (CNN) — European travelers have begun returning to the air as border restrictions ease, but the experience of a flight on the continent’s biggest airline reveals just what’s in store for those willing to fly in the wake of the pandemic.

CNN traveled from Frankfurt, Germany to the Portuguese city of Porto on a scheduled Lufthansa flight, to see how the aviation sector is adapting as countries attempt to restart their tourism sectors.

The German carrier is Europe’s largest airline and desperately needs to revive its fortunes after accepting a $10 billion bailout from the German government to counter the economic impact of virus-related travel restrictions.

Airlines including Lufthansa are now trying to convince passengers that air travel is possible without risking new spikes in coronavirus infections.

With popular European travel destinations such as Portugal, Greece and Italy now opening to EU visitors, the first flight carrying holidaymakers are now booking up.

Crucial differences facing fliers were immediately visible at the departure airport where everyone, including passengers are asked to wear face masks at all times. Social distancing is also stipulated at the terminal.

Once on the flight, these measures become more complicated. Masks are still worn but social distancing became impossible.

Although the aviation industry is beginning to restart, there are currently far fewer scheduled flights than before, so demand is high, meaning the flight was packed.

Purser Mike Lautekorn handed out disinfectant wipes to passengers as they boarded.

Some travelers expressed their concerns.

“It’s strange, it’s very quiet, you don’t have the hustle and bustle of the airport,” said one flier, Nayr Ibrahim. “It’s also a little bit scary, I think, because you never know what you might catch, or not.”

Another passenger, Karl Heinz Lattau, who says he normally takes about 50 flights a year, said he was unfazed by any potential risk, but said he was surprised the middle seats were occupied.

“I’m actually a little bit surprised because, I thought actually based on the coronavirus, we are sitting very, very close,” he said.

The atmosphere on board was more somber than usual. The face masks meant people were naturally quieter, the fear of unwittingly spreading droplets by speaking to neighbors perhaps driving the silence.

Passengers who spoke to CNN said they were worried about being on a plane in a confined space for a significant period of time.

Most said they were traveling to visit relatives or on work travel.

Wearing the mask on board felt strange for our reporters, particularly when trying to sip water or eat a snack.

While the flight’s pilots wore their masks on the ground, they don’t in air, explains captain Andreas Kauser. He said it was important to be able to see his co-pilot’s facial expression to communicate properly during unexpected situations.

“The face, the expressions are very important,” told CNN. “if you communicate with your colleague and you have some strange situation it’s good to see, is he in fear?”

Lufthansa says state of the art air filters on the planes make infections on board unlikely.

“The filters exchange the air with air from the outside and continuously circulate so there are no viruses,” adds Kauser.

Before traveling from Frankfurt to Porto, CNN boarded an internal German flight from Berlin to Frankfurt.

The Berlin check-in took almost two hours as staff had to ensure each passenger complied with destination country’s corona-related restrictions. The process currently varies for each country and there was a big line.

In Berlin, there were no plastic screens to protect staff.

Frankfurt was better organized, but long lines seem inevitable for travelers right now and it seems that anyone traveling in the near future can expect long wait times, including on the runway.

All CNN’s flights were delayed because the decreased number of scheduled flights mean airlines really don’t want anyone to have to miss their flight and wait a day for the next one.

Every part of the flying process takes a little longer and comes with a higher price tag.

This was a work trip, and I’m not particularly keen to fly on a vacation right now — the process feels difficult.

But with many people likely to be keen for a foreign vacation in warmer climates after months of restrictions, it’s likely that some will still want to travel this way.

Santa Fe, New Mexico: A Sweet Destination for Any Couple
Cracking Open the Issue of High Egg Prices
Eat Local If You Want, But Not For Climate Reasons
After a catastrophic break-up I travelled the world solo – here’s what I learnt
Belfastâs Titanic Hotel Reflects Bygone Age Of Shipbuilding