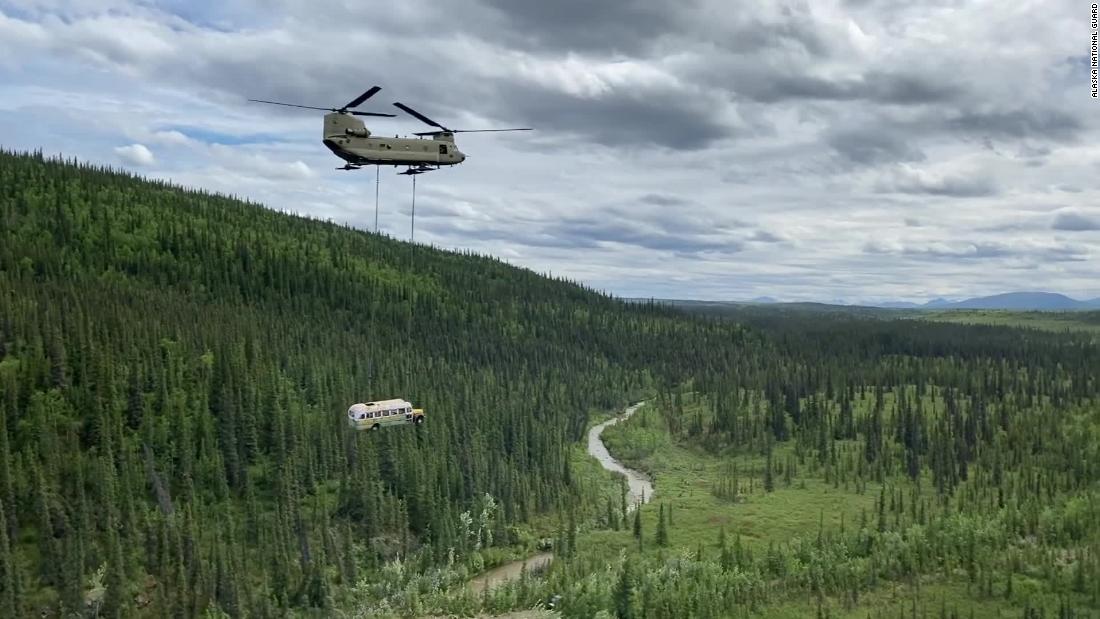 (CNN) — The abandoned bus on the Stampede Trail in Alaska — made famous by the book and film “Into the Wild” — has made its first journey in decades. This time by air.

The decision to remove the bus in coordination with the Department of Natural Resources was made out of concern for public safety, the guard said in a statement. In its current location, near Healy, Alaska, the bus has drawn people into danger of the Alaska wilderness.

It will be secured while the department considers all options for its permanent placement.

Visiting the dilapidated vehicle became a kind of pilgrimage for hikers ever since Jon Krakauer’s book was published in 1996; a movie adaptation was released in 2007.

The nonfiction book chronicles the life of Christopher McCandless, who grew up in an affluent suburb of Washington. But after graduating from Emory University in Atlanta, Georgia, in 1990, he left behind his comfortable life and headed west without telling his friends and family members.

An Alaska Army National Guard UH-60 Black Hawk helicopter hovers near “Bus 142,” made famous by the “Into the Wild” book and movie.

In April 1992, McCandless hitchhiked to Alaska, where a man dropped him off at the head of the Stampede Trail, according to the book. A few days later, he came upon the abandoned bus and lived there for about three months before deciding to head back to civilization.

As he attempted to make his way back, he arrived at a crossing of the Teklanika River. But because the river was running fast and high from rain and the snowmelt from glaciers, he was unable to make his way across, according to Krakauer.

Defeated, he turned around and headed back toward the bus, where he survived for about a month before succumbing to death in August 1992.

Hikers from around the world attempt to retrace McCandless’ steps every year, but many have failed and have had to be rescued. Some even died.

Last February, firefighters and Alaska state troopers rescued five Italian hikers on the Stampede Trail as they were returning from visiting the abandoned bus.

Less than a year before, a Belarus woman died on the trail trying to cross the Teklanika River to visit the bus with her new husband.

Best Things To Do for an Unforgettable Valentine’s Day
The 100 Best Places To Dine In America, According To Yelp
A Personal Journey Combining History, Simplicity, Sanctuary: In Quito, Ecuador, and Casa Gangotena. Part 1
Valentine’s Day Gift Guide: The Best Italian Gifts For Pasta Lovers
What’s Next For The No-Alcohol Market?