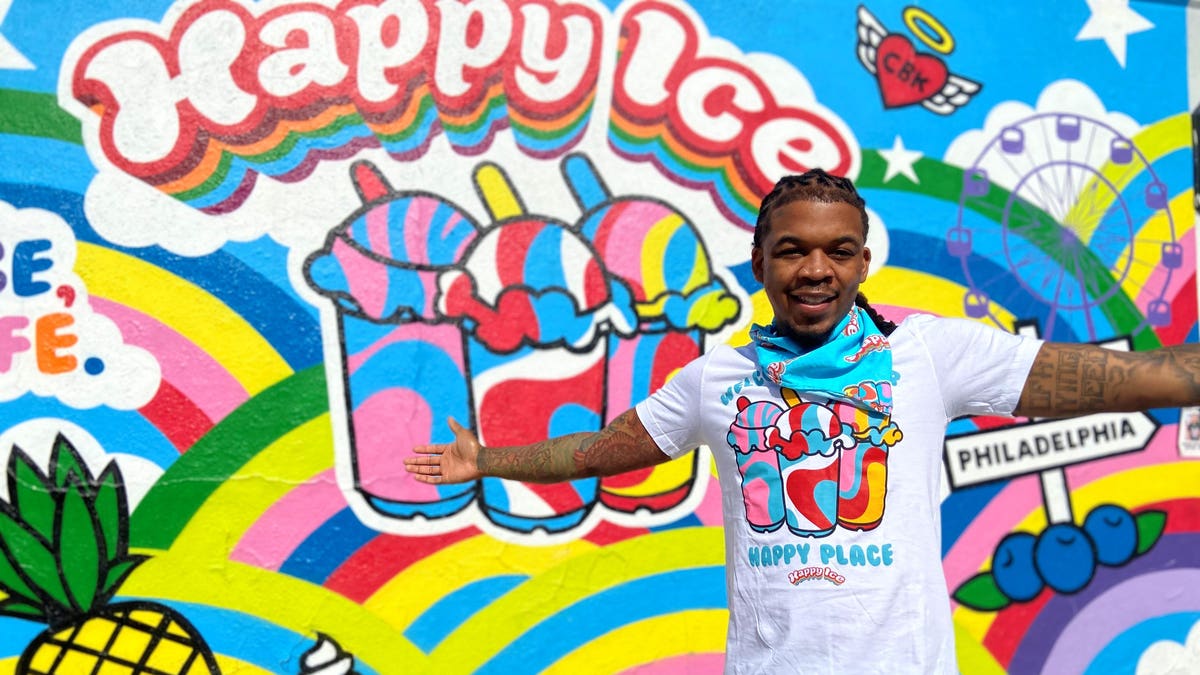 To say Lemeir Mitchell cares about his business seems like an understatement. Happy Ice, his water ice concept in Los Angeles, is all about fun and smiles as a brand, but that doesn’t mean Mitchell, founder and CEO, hasn’t needed grit and hard work to get to where he is today.

On May 30, he and a few of his employees stood in front of their store on Melrose Avenue as a precaution for any riots that might break out after the protests in the area—part of the Black Lives Matter movement and the public outcry against police brutality and George Floyd’s death.

Mitchell says his business was the only one along the street that had people standing around to protect it. He also put up signs with his photo and the words “Black Owned” on its walls as a way to deter potential rioters.

Mitchell’s caution did not fail him. A group of people started breaking into the businesses on his block—shattering windows, stealing goods and throwing items set on fire.

Though he and his crew couldn’t stop the masses from destroying the other stores around him, they managed to stop the whole building, which connects all the businesses on that street, from being engulfed in flames.

Mitchell hooked up a hose to the back of his store and climbed up to the top of the building to spray water while rioters lit things on fire and flung them onto the roof. His Happy Ice staff members got fire extinguishers out to protect the stores on the block.

It was a completely unprecedented situation for them as people who spend their days doling out colorful water ices. The Happy Ice founder and CEO told his staff then, “We serve ice cream, but today, we’re going to be firefighters if we have to.”

Mitchell stood in front of his Happy Ice store from 11 a.m. until 10 a.m. the next day. He’s sure that if he and his team hadn’t been out there in front of his business, it would have been destroyed along with the other stores.

He thinks the rioters listened to him and left Happy Ice unscathed because he was able to communicate how hard he worked to build his store and they also respected the fact that he, the owner, was willing to stand outside to save it.

The experience was an intense one, and Mitchell still finds it difficult to express how he felt during the thick of it. “It was sad to see, and it was shocking just to see so many people come out and be razing like that,” he says.

But he doesn’t resent the rioters. He actually feels empathy for them, when considering the situations he feels might have pushed them to break in and loot stores. “I felt super bad for the businesses that were being destroyed,” Mitchell says. “At the same time, I felt bad for the people who were stealing.”

From his perspective, the people that were stealing could have been “people that were literally hungry” and “don’t have any income because they lost their jobs from coronavirus.” America is not in a good state right now, and many are struggling, he says.

One thing Mitchell wants to make clear is that the Black Lives Matter protests, which are still happening everyday in Los Angeles, have always been peaceful. It was another group, separate from the actual protesters, who rioted and destroyed stores after the protest had ended in May. As a Black business owner, he fully supports the movement and its mission of racial equality and justice.

This episode is just the latest of several twists and turns in Mitchell’s long journey toward debuting his first brick-and-mortar Happy Ice store, which will finally open its doors to the public this Saturday on June 20.

Mitchell, born and raised in Philadelphia, moved to Los Angeles in 2016 with no intention of entering into the restaurant business. He’s an independent tattoo artist and reality TV star (you might have seen him on VH1’s Black Ink Crew: Compton).

But he saw people from all over the world contributing a “piece of their neighborhood” to the city’s diverse food scene and realized he wanted to do the same. “It inspired me to want to bring a piece of my hometown here to give people something that they’ve never experienced,” Mitchell says.

Something he had noticed was missing in Los Angeles was water ice—a type of Italian ice specific to Philadelphia. He decided to start a food truck that would introduce Los Angelenos to his hometown specialty.

Upon hearing his idea, his mother immediately joined in his excitement and supported it. They both made a phone call, and the very next day, Mitchell went to city hall to file paperwork for his new venture.

He decided on the name “Happy Ice” because that’s how water ice makes him feel, as someone who grew up eating it while hanging out and joking around friends. It’s a product with a lot of happy memories for him.

And the word “happy” is such a universal concept that translates into any language—perfect for Los Angeles’ multicultural community and for the brand when it crosses borders one day.

Mitchell had his work cut for him, as someone with no prior experience in restaurants or food. But he didn’t let that stop him. “I’m a hard worker,” the Happy Ice founder and CEO says. “Once I set my mind to something, I don’t stop until I figure it out.”

He went back to his hometown to intern at Fred’s Water Ice, founded and owned by Fred Cooper, an influential figure in Philadelphia’s water ice market and a family friend. For about two months, Cooper mentored Mitchell and showed him all the aspects of running a water ice business.

Equipped with newfound knowledge and skills, Mitchell returned to Los Angeles and launched his first Happy Ice truck in 2017. According to the brand’s website, the water ice has the “smooth, rich, creamy texture of an ice cream and the light, fruity refreshment of a sorbet.”

There are eight different fruit-based flavors, plus the Rainbow Rocket—a colorful explosion of every single flavor available in one cup. This multi-colored product has become a “viral sensation” that has “taken Happy Ice to the next level,” the founder and CEO says. The price for a water ice costs $4 to $6, depending on the size.

Mitchell says Happy Ice took off, especially among Los Angeles’ huge vegan community. The product is completely dairy-free, vegan-friendly and nut-free, so vegans and people with food allergies can enjoy his dessert.

When Ted Foxman came across the Happy Ice truck on Melrose Avenue one day, he got the business to cater an event, where he and Mitchell ended up talking. That conversation eventually led to a partnership—with Foxman investing close to $1 million in Happy Ice.

After Foxman joined as a business partner, Mitchell expanded Happy Ice with a second food truck in 2018 and has continued to offer his water ices, whether the weather is hot or cold. During cooler months, Happy Ice focuses on catering, especially for school events and social occasions for younger children. “A lot of the kids love us,” Mitchell says.

The founder and CEO signed a lease for his brick-and-mortar store last March with the expectation of opening that summer. However, building the store from scratch and making sure it had all the proper plumbing, electrical wiring and other necessities for the business took time.

Other delays held up the process of opening, but Mitchell finally managed to get a date for his health inspection a few months ago. On the day of the inspection, however, he got an email informing him that it was canceled until further notice due to the coronavirus outbreaks.

The riots also forced Mitchell to postpone his store’s opening, but he knows how to roll with the punches. And the “tremendous amount of support” from his Los Angeles community has helped him—before the recent push for Black Lives Matter and now, as many people are actively looking to support causes related to the movement and Black-owned businesses like his.

“I love the support,” the founder and CEO says. “I feel like the more that people come together, the more people show support and unity, the faster we’ll get to the results that we want to see. As a sign of solidarity and celebration of Juneteenth, every water ice sold at Happy Ice trucks today will be colored black, with all proceeds donated to a Black Lives Matter cause.

He will also release the brand’s new soft-serve ice cream, which will be available only at the brick-and-mortar location in vanilla and five other flavors. But the store will also have two-flavor machines so customers can have a variety of soft-serve options.

Mitchell didn’t want to alienate the vegan community who has helped make Happy Ice successful or use any ingredients with allergens such as nuts and soy, so the ice cream is made with oat milk. It’s vegan and nut-free, just like the water ice.

Soft-serve ice cream has always been something the founder and CEO has wanted to do. Back at home in Philadelphia, he enjoyed eating gelati—water ice and soft serve layered together.

The big picture for Mitchell is not only to open more Happy Ice locations in major cities across the U.S. and around the world but also to evolve his brand into more than something product-based.

He hopes to transform it into a lifestyle brand that creates events and happy family-friendly experiences where children can have fun and make long-lasting memories—essentially the “new Disneyland,” he says.

As a family man himself, this vision is one close to his heart. “I really just want to create a full happy brand,” Mitchell says. For him, Happy Ice should grow to be “more than just ice inside of a cup.”

To achieve that dream, he welcomes mistakes. “I’m not scared of mistakes,” Mitchell says. “Every time I come across a mistake, I always become stronger after that because I figure out the solution to not be in that position again.”

His advice to aspiring entrepreneurs who hope to start a new venture like he has is to remember that fear isn’t real; it’s something people create and cast on themselves. “Fear is one of the number one things that stops people from going after their dreams,” Mitchell says. “Don’t let fear stop you because learning from your mistakes is what makes people successful.”

Santa Fe, New Mexico: A Sweet Destination for Any Couple
Eat Local If You Want, But Not For Climate Reasons
Fungi-Powered Ingredients Startup Michroma Promising To Remove Petroleum From Food Colorings Raises $6.4 Million In Venture Funding
Looking For Non-Alcoholic Drinks? Japanese Tea May Be Your Perfect New Companion
Luxury Lifestyle Awards Reveals the Best of the Best in Hospitality Industry in the TOP 100 Hotels & ResortsÂ