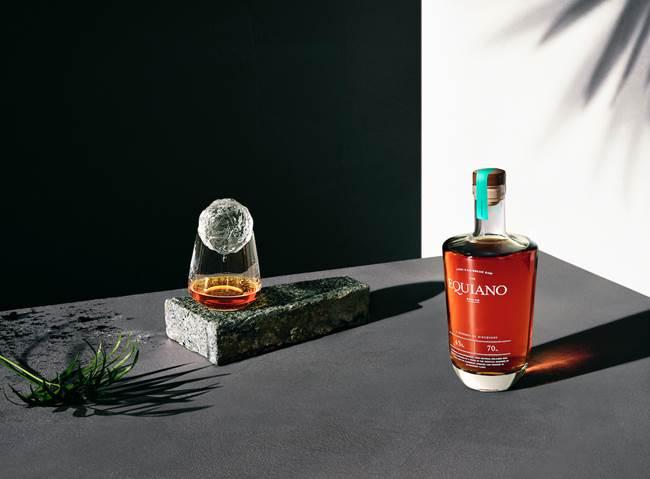 A new rum brand hits American shelves today. Equiano is a first-of-its-kind entry into the category—an Afro-Caribbean expression blending a liquid distilled and aged in Mauritius with that of Barbados. The brand is the brainchild of Ian Burrell, a global rum ambassador, in partnership with Master Distiller Richard Seale of Foursquare fame. Merging flavors and techniques from separate hemispheres, the unique offering looks to make a splash in a category that generates more than $2.3 billion dollars in annual sales—according to the Distilled Spirits Council of the United States.

Equiano is born at Gray’s Distillery in Mauritius, a small island nation 700 miles east of Madagascar. There, a molasses-based distillate is barreled for a minimum of 10 years in French Oak, including ex-Cognac barrels. The resulting rum then makes its way to Barbados to be vatted alongside award-winning spirit from Foursquare Distillery. Seale produces his rum using a combination of column and pot still spirit before maturing it all in ex-bourbon casks. Bottled at 86-proof and free of any color additives, it carries the best of both provenances: dark fruit tonalities including plum fruit and candied raisin in a slightly spiced finish.

The brand takes its name and inspiration from Olaudah Equiano, a Nigerian-born abolitionist, freedom fighter, and writer. In the mid-1700s Equiano was brought to the Caribbean in bondage as part of the Atlantic slave trade. Against all odds, he was able to buy his own liberation with savings he earned through selling rum. As a freedman he ended up in London by the late 1760s. There he became a prominent and active voice among the British abolitionist movement, becoming one of the first African writers to have his work published by major news outlets of the day.

His eponymous rum honors this legacy by donating 5% of its profits, annually, to ‘ground level freedom and equality projects’. By ordering a bottle of the $60 rum directly off the brand’s website $2 will go directly to the Equiano Foundation, which will announce its chosen charity later this year. In the meantime, here are some words from co-founder Ian Burrell on the new release.

How did rum become a part of your life?

My family is from Jamaica, so I have always had rum in the my household as it’s part of our culture. This helped while working as a bartender in the UK as I was hired by a Jamaican rum company as the first rum brand ambassador in the UK during the mid 1990s. In the early 2000s I decided that I wanted to create my own job, thus inventing my current role as the world’s only Global Ambassador for the Rum category which means I currently work around the world with several rum brands to promote the category.

How did you get involved in the Equiano project?

I was approached by the team as they wanted to create a new style of rum. After a few months of discussion we decided on the concept and the provenance of the brand.

Where did the Equiano idea come from?

As a team we felt that any new rum to the market needed to be strong, independent and stand for something more than just a rum brand. Equiano’s name came to us in a light-bulb moment, as the legendary freedom fighter & entrepreneur’s values echoed what we all stood for.

How did you end up sourcing spirit from Mauritius?

As the global rum ambassador for rum, I have visited and worked in many distilleries across the globe. So to create an African Caribbean rum I had to find an African rum that would work with the Caribbean liquid of my choosing. Mauritius, as a island, has several rum distilleries that make great rums, but the distillery that I decided to work with produced the quality and style of rum we needed for this project.

What is it like there? What makes their rum unique?

I have visited and worked in Mauritius several times over the past 10 years. In fact, I helped the local government funded initiative to promote Mauritian rums in Europe and back on the island to a new discerning rum drinker of premium Mauritian rums. The island itself is as beautiful as any tropical island in the Caribbean. It is nicknamed ‘The Green Island’, because sugarcane is grown everywhere across the volcanic paradise. Its culture is a melting pot of African, Indian, Asian and European, with English & French being the official language—although Creole is spoken by most of the inhabitants.

The fact that various cultures have impacted on Mauritius reflects on the style of rum that they create. Half the distilleries make rums from molasses — the byproduct when making sugar — while the other half use the French influenced approach of making their rums from fresh sugarcane juice. The rum that is used in Equiano has been aged in French oak casks and once used Cognac barrels and blended with rums aged in once used Bourbon barrels, making it rare within the rum industry as most rum will use just American oak.