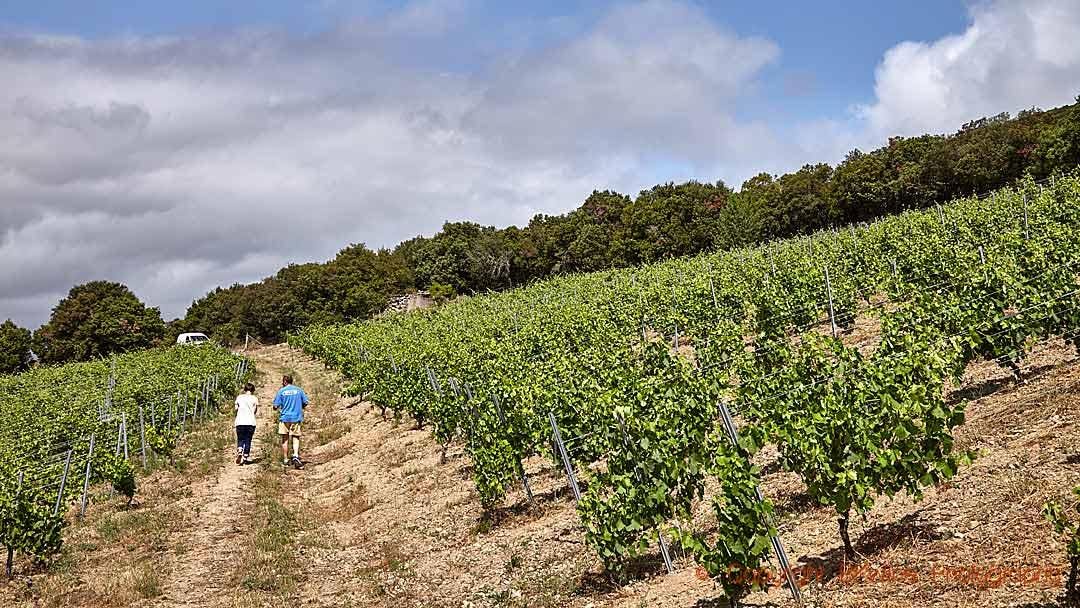 The organic wine industry is doing well. More and more people want to drink organic wines and are also prepared to pay a higher price for them. Now is a good time to ask, what is organic wine? Is there a straightforward answer? Yes and no.

Both the European Community (EU) and the USA have official and well-defined rules for organic wine farming.

The EU and US rules are fairly similar. In the vineyard, you cannot use any artificial fertilizer or synthetic chemical pesticides or herbicides. You cannot use any GMOs (genetically modified organisms).

To fight and prevent diseases and pests the organic producers are allowed to use a few chemical products that are considered “natural”, such as copper and sulfur. You can add organic fertilizer to your soil, from animals, plants, composted grape skins etc. Certain plant extracts, herbal teas and products made from microorganisms are also permitted.

The use of copper is very much an issue, especially in Europe. It is a heavy metal and it accumulates in the soil. Research is ongoing but at the moment there is no non-synthetic alternative to copper that works against downy mildew, a particularly difficult fungus disease. For many organic producers it is therefore a must.

The USDA National Organic Program (NOP) has a National List of Allowed and Prohibited Substances. Similarly, the EU regulation stipulates which products you may use for spraying, fertilizing and so on. Only the products explicitly named are permitted.

An organic grower will want to cut down on the use of additives in the cellar. He is also obliged to do so. Some additives and processing techniques are banned for organic producers. And here comes the big difference between a US organic wine and a European organic wine.

In Europe, an organic producer can add sulfites to the wine during the winemaking process and/or at bottling. The quantities allowed are lower -but now much lower – than for a conventional grower. Sulfites are used as a preservative to make sure the wine reaches the consumer in good condition.

In the US it is a little bit more complicated. There are two categories of organics for wine in the US:

“Organic wine” allows no added sulfites. This doesn’t mean that the wine is totally sulfur-free as sulfur dioxide is naturally produced during the fermentation.

“Wine made with organic grapes” are also made from 100% organic grapes and you may add sulfites up to 100 milligrams per liter, which is slightly less than what is allowed in Europe.

Very few producers are willing to risk making wine without adding sulfur dioxide. Sulfur is a microbiological stabilizer and it keeps the wine from oxidizing (it also has some other stabilizing effects). If you are not a risk-taker you opt for the second category of organics.

To convert to organic viticulture is a big change for the vineyard. You might lose some quantity in the first years, but then the vineyards often find a balance and returns to normal levels. The growers may have to be prepared for more frequent spraying, as the products they are allowed to use are “contact products” which means that if it rains, they are washed away and you have to spray again. Non-organic producers can use “systemic” treatments with products that are absorbed by the vine and works from within.

The majority of producers who go organic do it from the conviction that it is good for the environment. They are also convinced that they will make better wine. But even more important is the fact that they want to protect their families and employees from potentially dangerous synthetic products. The people most exposed to toxic pesticides are the people on the farms.

Actually, it is only in the last few years that the fact that a producer is organic has become a sales argument.

A small percentage of organic producers will also convert to “biodynamic” farming. It is different but has similarities with organics. Despite their small number, the biodynamic producers have attracted much attention. This is in part due to the fact some world-renowned producers are biodynamic. But also, I think, because biodynamics intrigues people. It also often confuses them.

In short, biodynamic farming is organic farming plus the principles laid out by Rudolf Steiner in the 1920s. Steiner was the founder of the anthroposophy movement. He issued his guidelines for biodynamic agriculture to help farmers who complained that their soil was losing its health due to the use of artificial fertilizers.

In biodynamic farming, you want to make your vines strong so that they can resist attacks from diseases. To help the vines, you use the so-called biodynamic preparation. The most important ones are named 500 and the 501 and are based on cow manure and finely ground quartz respectively.

The others are based on plants such as horsetail, yarrow, chamomile, stinging nettles and dandelion. These plants are used for a reason. They have specific characteristics that will help the vines and the soil. For instance, horsetail contains sulphur. An infusion of horsetail is sprayed on the vines, drying them out and protecting them from fungus attacks.

Most preparations are composted before they are applied. The cow manure for the 500, for instance, is put in a cow horn and buried in the ground for several months. This is perhaps what biodynamics has become most famous for. A homeopathic quantity of this composted manure is then diluted in water in a process called dynamization and sprayed over the vineyard. The aim is to revive the soil and to nourish it.

Many biodynamic growers (but not all) also take into account the cosmic rhythm. With the help of the biodynamic moon calendar, they plan their work in the vineyard and cellar.

Organic and biodynamic viticulture is also about improving the biodiversity around the vineyard. If you have space, you plant trees, hedges, plants, flowers in and around your vineyards to create a habitat for birds and insects.

Can you taste that a wine is organic?

The producers themselves often say that their wines are fresher with higher acidity and that their grapes ripen earlier. But for a consumer it is difficult. There is certainly not an “organic or biodynamic flavor” that can be identified in wines. It is still up to the wine producer to make good wine. It will never taste good just because it is organic. But as preventive measures are the main weapon for organic farmers, they need to spend more time in the vineyards, to observe and to pay attention to details. This may well show in the quality of their wines.