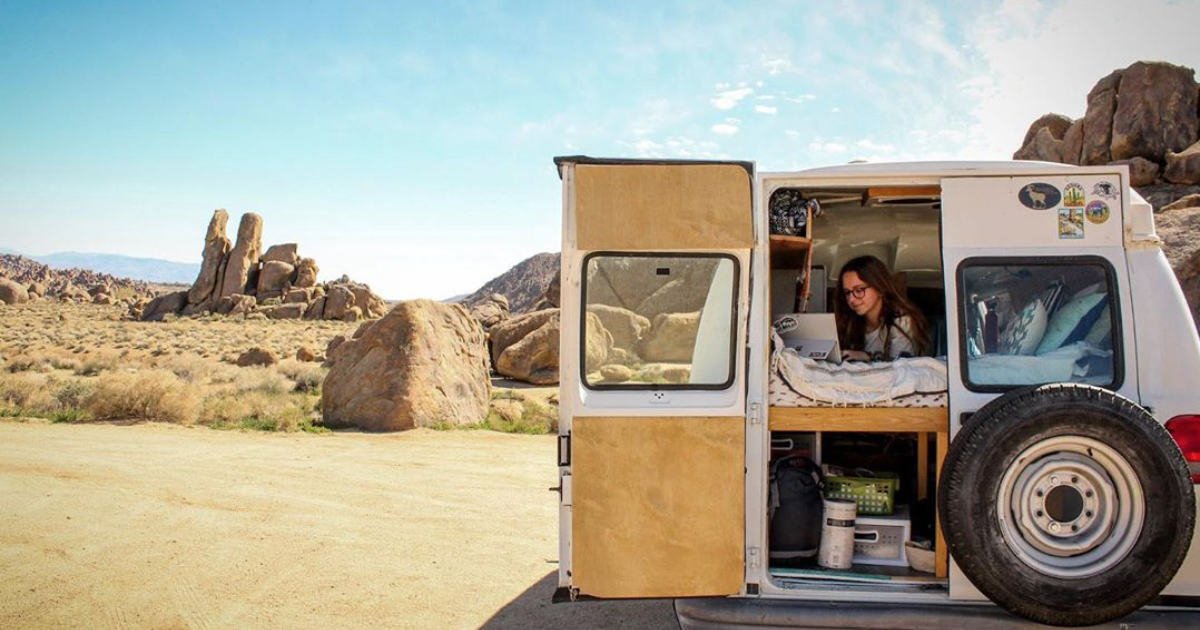 #VanLife. It’s been all the rage for a while now. Living in your van or car can provide freedom. Freedom from rent, freedom from the mundane, and often most importantly, freedom to travel the country.

But what happens when a pandemic hits, bringing travel to a grinding halt? What happens when you’re ordered to stay home but your home is a van? I spoke with two people for whom van life is the norm and learned some of the ways COVID-19 has impacted their community. 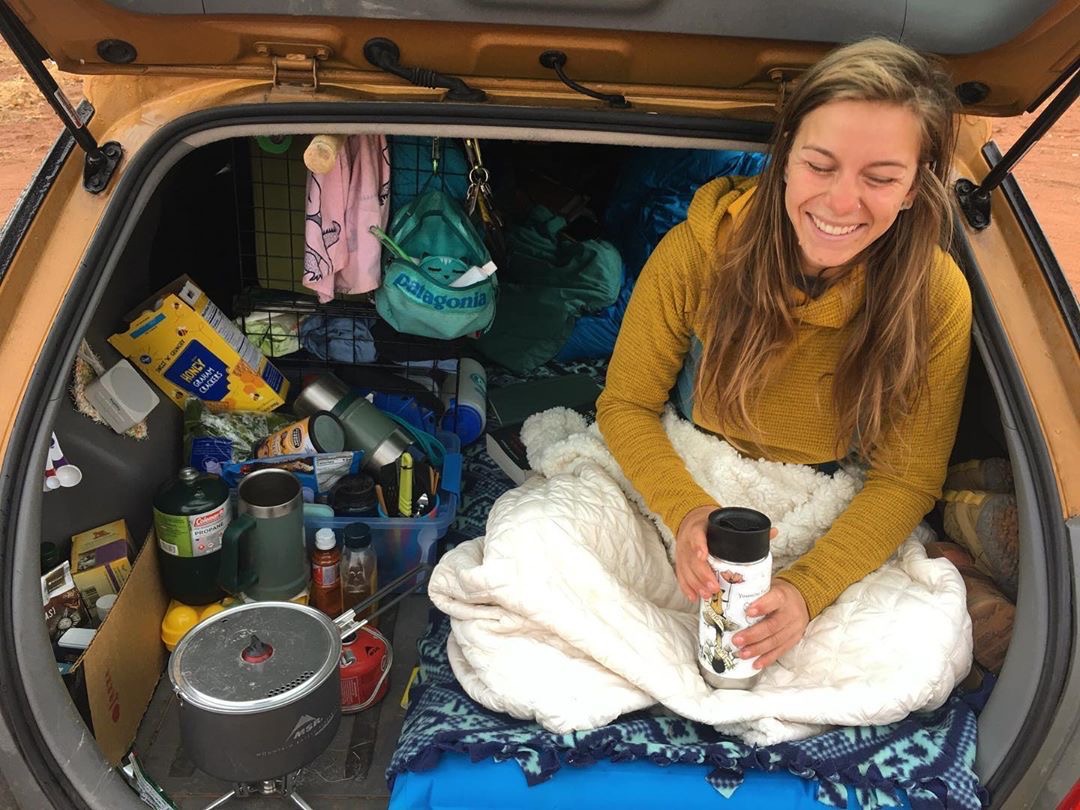 Jen Nielsen, @jolly_jen, in the 2009 Toyota Matrix she calls home six months out of the year.

When COVID-19 hit the fan in March 2020, going “home” to parents or friends was an option for some vanlifers, but not all. For many, traveling across the country to stay with friends or family would do more harm than good because they would be putting not only themselves at risk but every person they came in contact with along the way. Additionally, those who normally have someone to go to might not have that option anymore if those individuals are at a high risk of being seriously harmed by the virus. Then there’s the fact that some people don’t have friends or family they can stay with at all.

So what were vanlifers to do? Well, many of them chose to self-quarantine by camping on Bureau of Land Management (BLM) or National Forest land. It was something they knew how to do safely, it stopped them from traveling, and it meant they would only be close to other people when they went into town for food or gas.

There were a few problems, however. One of these was time limit restrictions, usually 14- or 16-day limits in these areas. To make matters worse, some locations even closed down for people who were from outside the county. Halle Homel, a full-time vanlifer, summed up the situation in a blog post on her site: “We rely on public lands to be able to live in our homes when we have no other options […] But lately, BLM and Forest land has been threatening closures too, and for those of us who live on the road, I have to ask the question: where are we supposed to go?”

A part-time vanlifer named Jen Nielsen experienced this problem first-hand. She quarantined in Utah on BLM land for a while before receiving an order to leave. Then she packed up her car and headed next-door to Colorado where she quarantined on more BLM land until she had to leave after 14 days. The constant need to move clashed with her desire to be responsible, shelter in place, and come into contact with as few people as possible.

Being a vanlifer during this time had other negative effects, one of those being in-person harassment. For example, Jen was yelled at by a local for having out-of-state plates while in Colorado.

Cyber harrassment was also a problem for many vanlifers who document their adventures. Halle was active in sharing her experiences online during this time and faced backlash. On Instagram, she would post photos of her secluded campsites and in exchange received negative messages from people telling her to go home. 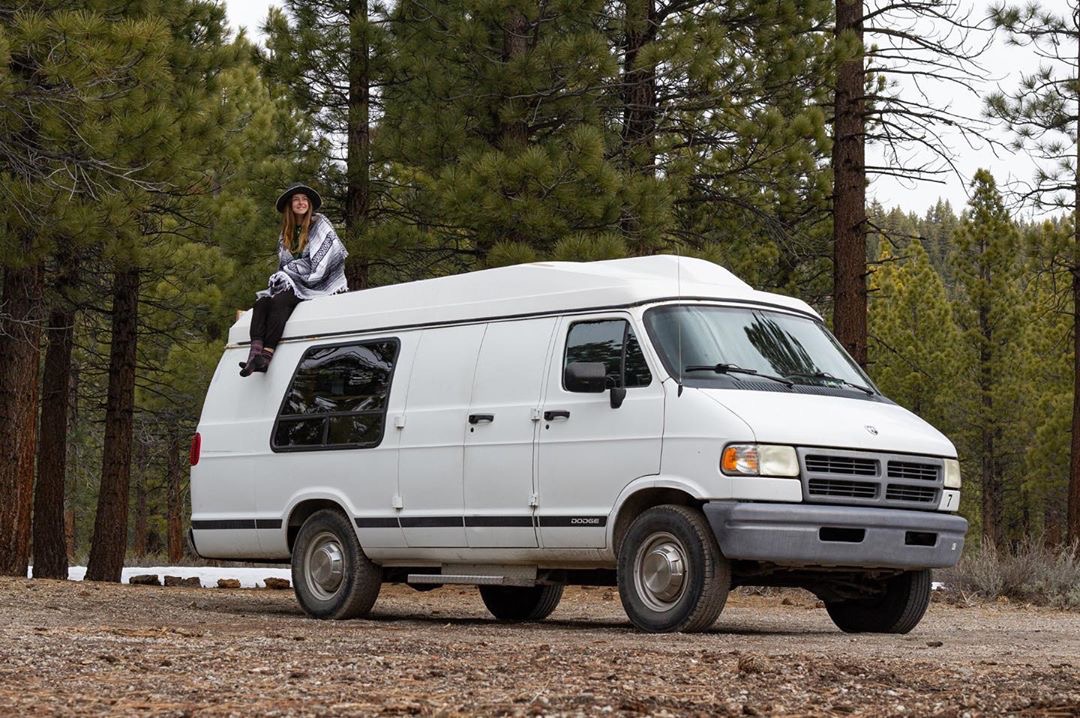 Halle Homel, @halleswanderingsoul, sitting on top of her van in California.

As restrictions now let up and tensions regarding the pandemic subside, vanlifers are starting to move again. With assistance from Jen and Halle, I gathered a few tips for helping vanlifers do so safely.

1.Plan ahead: Do your research to make sure campgrounds, roads, and recreation areas are open before you head there. Also, utilize apps like iOverlander, a community-based tool, to find a place to sleep before moving.

2. Seek out unpopular areas: Many national parks are being slammed with visitors as they reopen, which makes it difficult to social distance while exploring these locations. Focus your travels on less well-known areas of the country.

3. Avoid bad roads: As there are less people traveling than normal, there are also less people going down remote, unpaved roads. Therefore, if you get stuck on one of them, there’s a smaller chance that someone will pass by and help you out of the mud. Furthermore, these roads are often in no-service zones, so being unable to call for help may leave you stranded.

4. Consider your route, not just your destination: Routes leading you through large cities should be avoided. Not only does this allow you to evade the crowdedness that’s synonymous with these cities, but it also gives you the opportunity to support the economies of smaller communities.

Finally, I want to encourage you to share your own tips for traveling safely during this time in the comments below! This new environment is a tricky one to handle, but if we all help each other out, it doesn’t have to be dangerous.

Martha Anderson is a Budget Travel intern for summer 2020. She is a graduate of Kennesaw State University.