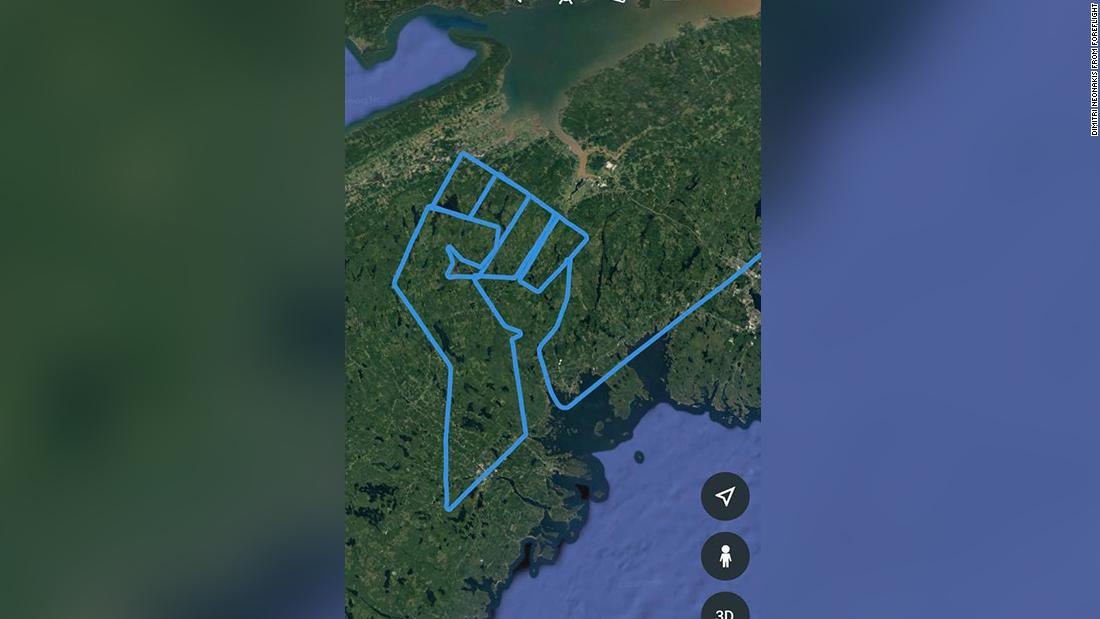 Travel
Share on Facebook
Share on Twitter
Share on Pinterest
Share on LinkedIn
Dimitri Neonakis took to the Nova Scotia sky on Thursday with his personal message to Floyd. He told CNN he chose the fist because it’s a symbol of the movement against racism.
“We all have to speak out and we have to end it,” Neonakis said. “There are no borders when it comes to racism.”
Neonakis mapped out the image on an app and then followed the line for the fist in his plane. He said it took him about two and a half hours at 150 miles per hour to finish the image.
Because the drawing was done on a flight path, only radar could detect his drawing.
FlightAware.com followed Neonakis during his entire flight and documented the completed picture when he got back to the ground.
Neonakis said the picture is simply an expression of his feelings for his own reasons and has nothing to do with politics.
“I feel the need to speak out and my way is in the air,” Neonakis said. “Even though no one is going to see it, it makes me feel good… I know it’s for them, the people oppressed over the years.”
Neonakis has drawn other images in the sky to express his reaction to tragedy, including in April when nine people were killed in a murder rampage in Novia Scotia.
This article was originally published by Cnn.com. Read the original article here.
Share on Facebook
Share on Twitter
Share on Pinterest
Share on LinkedIn

Santa Fe, New Mexico: A Sweet Destination for Any Couple
After a catastrophic break-up I travelled the world solo – here’s what I learnt
A Personal Journey Combining History, Simplicity, Sanctuary: In Quito, Ecuador, and Casa Gangotena. Part 1
Eat Local If You Want, But Not For Climate Reasons
What’s Next For The No-Alcohol Market?