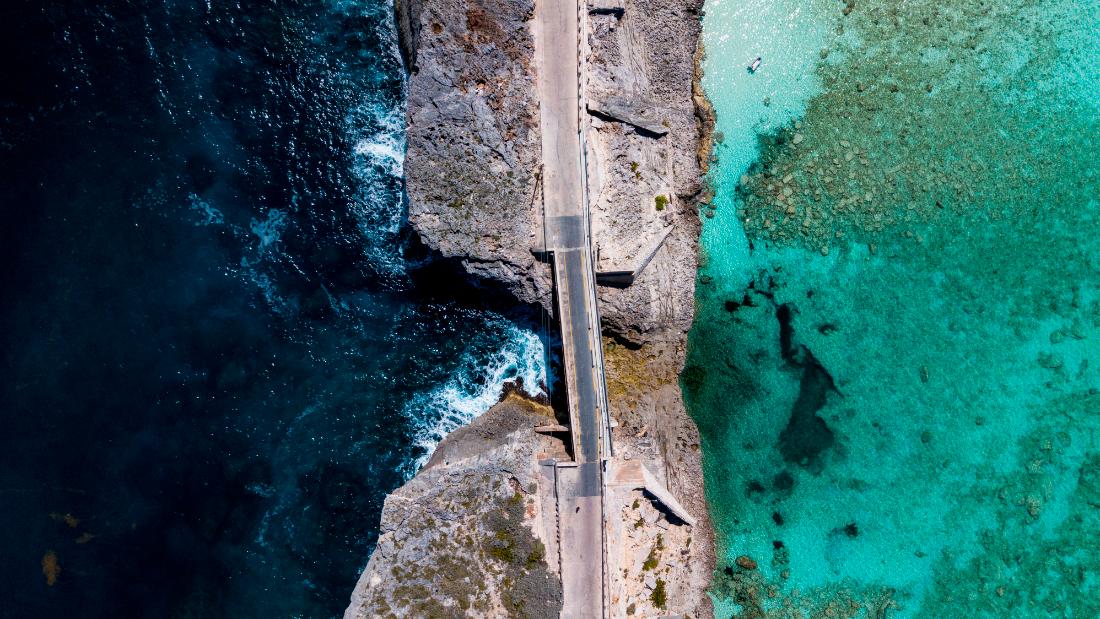 The sinuous island — with a name taken from the Greek word for freedom — is also audaciously good looking.

And one main road runs the length of Eleuthera, which stretches 110 miles but is only two miles across at its widest point.

Stunning natural features are found up and down the island, with some of the most eye-catching sights at its narrowest and southernmost points.

A study in contrasts

The Glass Window Bridge spans a sliver of land separating the deep blue Atlantic from the Bight of Eleuthera.

Located on the skinniest part of Eleuthera, the Glass Window Bridge stretches across just a 30-foot sliver of land separating the dark, churning waters of the Atlantic Ocean from the smooth turquoise shallows of the Bight of Eleuthera.

The contrast is arresting, particularly from the air. With sturdy shoes, you can climb the rugged karst hill above the bridge for a wider view up and down the slim island and across the two bodies of water.

Violent storms have long since washed away a natural stone arch that once stood on the site of today’s concrete bridge. But American artist Winslow Homer was able to capture the arch in his circa 1885 painting “Glass Window.”

Rough weather and high sea swells can lead to bridge closures and dangerous situations, so it’s best to avoid the area when conditions are poor.

The Queen’s Bath is a series of natural pools carved into rock by the pounding Atlantic.

About a half mile south of the Glass Window Bridge, there’s another stunner well worth a visit.

The Queen’s Bath is a series of natural pools carved into rock by centuries of pounding surf on the wild Atlantic side of Eleuthera.

The surf washes into the pools for a refreshing dip when outside temperatures are warm but not blazing hot. When it gets hotter, the pools are warmed by the sun to a bath-like temperature.

It’s best to visit when the tide is fairly low and to skip it altogether when the surf is rough. The rocky “bathtub” surfaces are quite sharp and water shoes or tennis shoes are a must.

Both the bridge and the baths are about a 15-minute drive from North Eleuthera Airport, which during normal travel times welcomes direct flights from Atlanta, Fort Lauderdale and Miami.

Castaway isolation, while it lasts

On an island that boasts more than its fair share of beautiful beaches, there’s a more-challenging-to-reach stretch of sand that warrants the extra effort.

About two hours south of the Glass Window Bridge, on Eleuthera’s southernmost tip, Lighthouse Beach boasts the kind of island isolation featured in the most seductive screen savers.

A Jeep or SUV is best for navigating the rocky, unpaved road.

The payoff? Miles of powdery pink sand on the Atlantic side of the island. An old lighthouse sits on the limestone towering above the ocean, and great snorkeling and beautiful vistas over Half Moon Cay add to the spot’s enchanting remoteness.

Belfastâs Titanic Hotel Reflects Bygone Age Of Shipbuilding
Cracking Open the Issue of High Egg Prices
As Tequila Takes On Global Ambitions, 818’s Mike Novy Weighs In On The Category’s Major Moves
Luxury Lifestyle Awards Reveals the Best of the Best in Hospitality Industry in the TOP 100 Hotels & ResortsÂ
Welcome To The Year Of Yaupon Tea