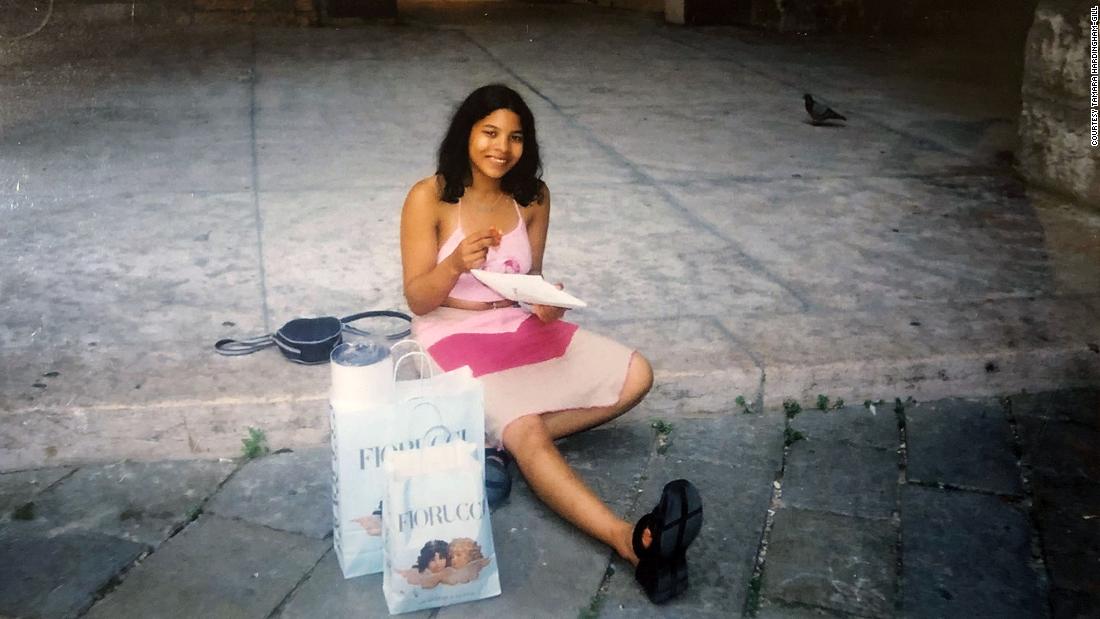 (CNN) — Like many people, I developed an obsession with Italy relatively early in life. Unlike many people, mine was probably inspired by a cartoon dream sequence in which Yogi Bear and his girlfriend Cindy sailed through Venice on a gondola.

I quickly moved on to classier inspiration — “Light in the Piazza” starring Olivia de Havilland and George Hamilton and “Roman Holiday” with Audrey Hepburn and Gregory Peck — but really, anything featuring Italy would do.

That’s the only explanation I have for seeing Mary Kate and Ashley Olsen’s “When In Rome” multiple times.

I got my first taste of the beautiful country during a school trip to Florence, during which my friends and I had a blast recreating scenes from the E.M. Forster’s novel “Room With A View,” eating gelato, walking along the River Arno and hanging out by the Duomo.

Once school exams were over, I began planning a mini-trip to Italy with my sister, who’s just a year younger than me, so I could revisit Florence and go to some of the other Italian cities I’d only ever seen in movies and, er, cartoons.

Tamara Hardingham-Gill developed a thirst for spontaneous travel during a trip around Italy with her sister.

It was technically a backpacking trip. We had everything a backpacker needed — a Lonely Planet guide and a vague itinerary.

The only problem was, we didn’t care for backpacks.

Instead, in August 2001, as we embarked on a trip that would take us from Verona to Venice, we decided it would be far more convenient to squeeze our possessions into two colossal suitcases.

Spacious luggage was crucial. We needed all the outfits we could possible cram into them. The thought of turning up at the Vatican Museums or Florence’s Uffizi Gallery looking even slightly disheveled was something we wouldn’t even consider.

We knew we’d be looking back on the photos for years to come and wanted to ensure we liked what we saw. Mercifully, this was before we owned digital cameras, otherwise we’d have wasted hours of the trip deleting and retaking pictures.

On arriving in the “City of Love” in the middle of the night, we hauled our massive bags into a hostel shared by actual backpackers.

There were looks of horror as our cases knocked chunks out of the walls while we tried to fit them under the bunk beds.

Blissfully unaware of how ridiculous we looked, we unpacked and chatted to them about their exploits, taking recommendations on places to see.

The next few blisteringly hot days were spent continually getting lost in Verona while waving our Lonely Planet around and occasionally attempting Italian phrases.

It took us so long to find “Juliet’s tomb,” a sarcophagus beneath the former Monastery of San Francesco al Corso that’s said to have links with Shakespeare’s tragic love story, I actually remember more about the random places we ended up than the tomb.

Once we finally located it, my sister climbed into and played dead, just because.

The next day, because our suitcases weren’t already heavy enough, we hit the Fiorucci store, buying dresses and shoes that we struggled to stuff into them.

When the time came to move on, our new friends from the hostel, who were leaving the same day, invited us accompany them to the station — despite our huge luggage we’d been accepted as backpackers!

But after 10 minutes of looking back at us loudly scraping our unwieldy cases across cobbled streets, they unceremoniously ditched us.

Perhaps they were embarrassed to be seen with such badly prepared travelers.

Travel on a whim

The two-week trip was full of ups and downs, but both look on it as one of the best times of their lives.

Our lack of preparation extended to train timetables.

We’d simply drag our suitcases over to a city station as early as we could, depending on how long it had taken us to get ready that morning, and hope for the best.

This also meant we went hungry a lot.

Back then, most restaurants in Italy operated around strict meal times, so we’d often arrive at a city at around 3 p.m in the afternoon desperate for a serving of pizza or pasta, only to be greeted by locked doors and shutters.

Turning up in cities without pre-booked accommodation also proved to be very hit and miss.

In Milan, the only place available at very short notice was a hot convent, where we dragged our suitcases into an austere room originally meant for nuns.

Our day trips were so poorly timed, we barely scratched the surface of Siena’s stunning landscape, and our trip to the Leaning Tower of Pisa was so rushed, I can only just about remember being there.

The pair struggled with the scorching temperatures during their time in the Italian capital.

Nevertheless, by the time we got to Rome, we’d convinced ourselves we were seasoned adventurers — albeit seasoned travelers with enough shoes to last several months.

But the rising heat of mid-August began to take its toll, prompting some spectacular meltdowns.

My sister still reminds me of the time I asked a street vendor outside the Colosseum the price for a bottle of Coke.

“Twelve thousand lire,” he replied. This was the equivalent of around five dollars then — a lot to spend on a fizzy drink.

Almost delirious at this stage, I began rummaging around my purse for the cash before being dragged away by my incredulous sister.

“I’m just so thirsty,” I said, sounding much like a toddler having a tantrum.

After yet another scorching afternoon of sightseeing, we were accosted by a very friendly tour guide, who offered us tickets for a pricey hop-on/hop-off bus tour of the city.

We looked at her with disdain. Didn’t she realize we were “real” travelers. As far as we were concerned, luxury bus tours were for pampered tourists staying in swanky hotels.

She was clearly reading us all wrong. I imagine our immaculate outfits were throwing her off track — although our look was rather spoiled by the bruises on our legs from being bashed by those heavy cases.

Hilariously, we aligned ourselves with the dedicated backpackers who continued to shake their heads in disbelief every time we turned up at a new destination with luggage that only got heavier as we indulged in more shopping sprees.

When it came to pack up and move on, they would gasp as they watched us sit on the cases in order get zips to close.

Venice was the last stop on their eventful Italian visit.

When we first arrived in Italy, we’d envisioned hanging out in bars and nightclubs every evening.

But we soon realized that partying is often the last thing you want to do after an exhausting day walking around museums, art galleries and boutiques.

Having said that, we tried not to leave any major city without sampling its nightlife at least once.

On our last evening in Rome, we were accosted on the Spanish Steps by a group of American tourists who were part of an official bar crawl — an activity long since banned in the Italian capital.

They convinced us to join in and we had an absolute blast. It was as rowdy as you can imagine, with mindless drinking games and lots of inebriated conversations.

But after spending so much time with just one other person, it felt great to be in the company of so many strangers, even if they could barely stand up.

Next up was Venice, our final stop. But our typically chaotic relationship with train timetables mean we missed a direct connection, opting instead to break up the journey with a few hours in Florence.

What could possibly go wrong? Plenty as it turns out.

After a failed attempt at seeing Botticelli’s “The Birth of Venus”– the queue for the Uffizi Gallery was insane — we sheepishly returned to the station to await our train.

During the course of the trip, we’d been swapping bags while on the move for no particular reason, and being the useless travelers we were, we’d opted to keep both passports in the same bag.

An hour into our train journey to Venice I looked over at our luggage and realized one bag was missing.

We’d left it on the floor of the train platform in Florence, both assuming the other had picked it up. We exited the train at the next stop and made our way back. The bag and our passports were long gone.

After alerting station staff, we were taken to an office and asked to complete a form describing the bag and its contents.

I broke down in tears as I imagined having to camp out at the British Embassy to get replacement travel documents and never making it to Venice, my heavy tears starting to ruin the paperwork I was filling out.

At the moment of my deepest despair, a very petite Italian woman came sailing through the door.

“Tamara,” she said excitedly. “I ‘ave ah your bag.” The sheer joy I felt in that moment cannot be put into words.

Beginning of the end

After dreaming of taking a night time gondola ride as kids, the pair were able to experience it together.

A few hours later, we boarded yet another train to Venice, opting for a faster, more expensive one in an attempt to make up lost time.

Everything had been building up to this, and it was just as magical as we’d imagined — even despite the obstacle course of staircases and cobbled streets between the station and our hostel.

We visited the Piazza San Marco and the Rialto Bridge and I enjoyed getting lost in tiny winding streets and discovering little boutiques and cafes, as well as the novelty of traveling on water buses.

We blew a small fortune on a night time gondola ride, for the full Yogi bear experience. It was worth every penny and thankfully meant we had less money to spend on things to make our suitcases any heavier.

Our last day was disastrous. We lost each other for hours and blamed the other for the wasted time searching when we were finally reunited a few hours before our flight home to London.

The flight was delayed, as was our baggage, which we were understandably sick of the sight of by this point.

We didn’t get home until the very early hours of the next morning, and by then we were barely speaking to each other.

Still, in retrospect, I wouldn’t have it any other way.

Although I’ve returned to Italy several times over the years, I’ve never been able to recreate the magic of that trip.

My sister and I took plenty more vacations together in the years that followed — Maui, Rio de Janeiro and New Orleans — always with suitcases rather than backpacks.

Then, suddenly, we stopped traveling as a twosome. There was no conversation about it. Just a silent agreement that that part of our lives was over — at least for the time being.

When I told her I was writing about one of our many escapades, she paused, then asked “which trip?”

“Italy, of course,” I replied.

“Really?” she said with a smile. “That’s perfect. I think that’s the best we’ve ever looked. Those are some great pictures.”

Hauling those suitcases full of clothes around was worth it after all.

Fresh Take: The Truth About Gun Violence, Food Insecurity And Food Workers
Vegan Pure Grit BBQ Opens In New York City After A Four-Year Delay
Not a fan of cruising? The hack that could change your mind
Tourism is roaring back in China. But the $6 trillion consumer market is digging itself out of a deep slump
The best Edinburgh spa hotels