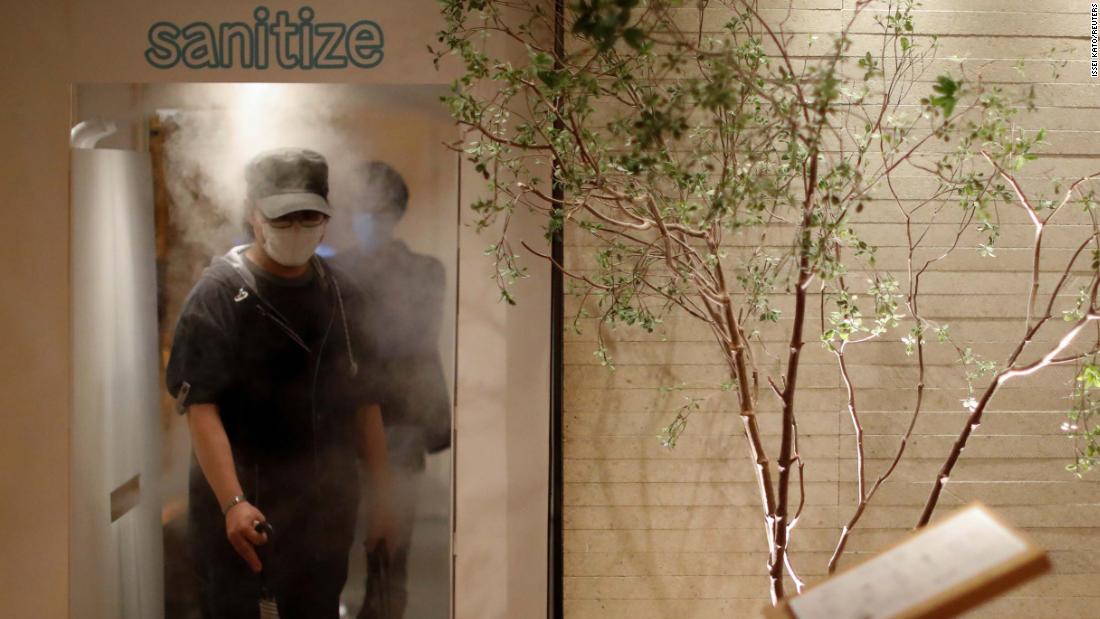 Travel
Share on Facebook
Share on Twitter
Share on Pinterest
Share on LinkedIn
(CNN) — As businesses around the world adopt new practices due to coronavirus, one Japanese pub is taking a novel approach to customer safety.
Visitors to Kichiri Shinjuku, a traditional Japanese-style pub known as an “izakaya,” are sprayed with a fine mist of disinfectant before they are allowed to enter.

“We want customers to feel safe when they come inside,” spokeswoman Rieko Matsunaga told CNN. “This is geared to promote social distancing and prevent infections.”

Upon arrival at the pub in the Shinjuku district of Tokyo, customers are greeted by a hostess on a monitor, who tells them to wash their hands and take their temperature with a thermometer.

Next, they walk into what looks like an airport security scanner, where they are sprayed with a mist of chlorine-based disinfectant for 30 seconds.

Customers then pick up a map that shows them where to sit, and scan a QR code to bring up a menu on their phone, from which they can place their order. Diners sit separated by clear acrylic screens.

The pub is owned by Kichiro & Co., which has 103 locations in Japan. The company installed the machine at its Shinjuku branch on May 14, and a Kichiri pub in Osaka got its own machine on May 19.

“We set it up to abide by the new lifestyle guidelines,” said Matsunaga. “We’d like to spread this technology and collaborate with other restaurants. We also run Japanese omelette rice and hamburger stores so we’re thinking of installing this technology there too.”

While Matsunaga cited guidance from the Japanese Ministry of Health in the company’s decision to use hypochlorous acid water to spray customers, the World Health Organization (WHO) says spraying people with disinfectant is a really bad idea.

“Spraying disinfectants can result in risks to the eyes, respiratory or skin irritation and the resulting health effects,” the WHO said in an updated advisory published Saturday.

“Spraying or fogging of certain chemicals, such as formaldehyde, chlorine-based agents or quaternary ammonium compounds, is not recommended due to adverse health effects on workers in facilities where these methods have been utilized.”

Japan continues to battle the pandemic and has implemented what it calls a “soft lockdown.”

On May 6, the government extended the country’s state of emergency until the end of the month, while introducing controversial “new social behavior guidelines.”

An expert panel told the population to permanently adopt measures such as wearing face masks and keeping two meters between people.

Other advice included telling restaurant customers to sit outdoors, side-by-side while keeping conversation to a minimum. This left people wondering why Japan’s advice differed from many other countries’.

“I’m dumbfounded … There are no other experts urging this kind of advice in the world — just experts in Japan. It’s like they studied the virus, but not human behavior. What’s scarier than the virus is ignorant people giving society guidance on how to tackle it,” said one Twitter user.