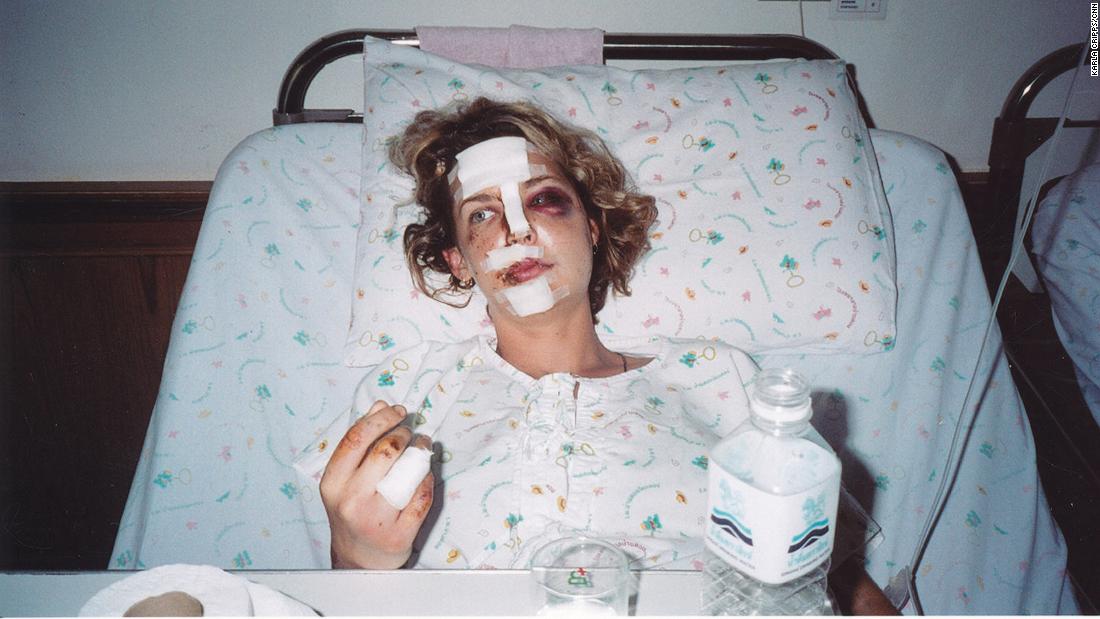 Bangkok (CNN) — Every time I read a news story about a young traveler in hospital in Thailand struggling to get home following a horrible motorbike accident, my stomach twists into a knot.

Pre-Covid, these incidents would hit the local headlines all too often, with accompanying social media comments from readers usually falling into three categories:

1. Admonishing the victim for being foolish enough to ride a motorbike in a country with such dismal road safety records.

2. Casting scorn on the injured party’s family for having the gall to set up a GoFundMe page when said person should have purchased insurance.

I’m glad social media wasn’t a thing 20 years ago, when I was that unfortunate, naive backpacker, lying in a Koh Samui hospital bed with stitches covering significant portions of my body — including my tongue — and a plastic drainage tube in my knee.

A GoFundMe account, on the other hand, certainly would have been handy. I, too, was lacking adequate travel insurance and man did those hospital bills make my Canadian eyes, accustomed only to universal healthcare, water in shock.

It was supposed to be a year-long adventure, backpacking through Southeast Asia with one of my closest hometown friends, Jodi, followed by a work holiday in Australia.

After saving for months, I’d quit my job as an assistant producer at a morning show at a TV station in Canada, telling myself this would be my last chance to see the world before getting ensnared by the three “Ms”– marriage, mortgages and motherhood.

Jet-lagged from the 20-something hours of flights, which took us from Edmonton to San Francisco to Seoul to Bangkok — we were backpackers, we went for the cheapest option possible — our eyes widened as we stepped foot on Khao San Road just two hours after we landed at Don Mueang International Airport.

The famed backpacker district, with its bright lights and pumping music, quickly sucked us in, its “booze vans,” pubs and cheap food helping us battle the scourge of jet-lag for the next several hours till we stumbled back to our guest house on nearby Phra Arthit Road, collapsing into our beds.

We spent the next few days plodding the well-worn tourist trail, Lonely Planet guidebook in hand, as we ticked off all the usual rites of Bangkok backpacker passage — elbowing through crowds at the Grand Palace, falling for tuk tuk scams and paying way too much for a long-tail boat tour of the Chao Phraya River.

Bangkok heat eventually getting the better of us — we couldn’t afford a hotel with a pool; even splurging on a room with A/C felt decadent — we decided to head north, meeting up with a friend from our hometown who had flew in from Australia. From Khao San Road, we took a night bus to Chiang Mai. It was a sleepless, bumpy ride, made worse by the smell of dog poop on the bottom of a fellow traveler’s shoe that wafted into my nostrils from the seat behind me.

A three-day trek through the green mountains of Thailand’s north quickly reminded us why we came to Asia in the first place — a wonderful, occasionally challenging experience that took us past scenic vistas and waterfalls.

I’m grateful for those two weeks.

Because almost as soon as we left Chiang Mai, things began to unravel as quickly as a cheap crochet bikini top that’s been washed one too many times.

We arrived in Koh Samui after dark, following a series of rides on trains, trucks, boats and one sleepless night on the floor of the airport — in a panic, we foolishly jumped off at the wrong train station in Bangkok in the city’s Don Mueang district and couldn’t afford the nearby airport hotel.

The following morning, Jodi and I explored the island with our shared motorbike rental, hitting up the Big Buddha and other local attractions before heading back to our beach bungalow to get ready for dinner.

We spent the night on the floor of Bangkok’s Don Mueang Airport — even though we weren’t actually flying anywhere.

A lovely German medical worker named Arno, who was familiar with the island and also staying at our accommodation, offered to take us to a nice seafood restaurant on the beach.

The night was fairly uneventful — great food, nice weather — until the drive back to the bungalows. As anyone who’s been to Koh Samui knows, those roads are curvy, winding through the island’s jungle-covered hills.

On one particularly sharp turn, our motorbike hit a patch of loose gravel and skidded onto its side, slamming us into the tiny rocks, which embedded themselves into our new, open wounds.

Jodi was driving — a fact I love teasing her about to this day — and I was riding pillion. And, perhaps most embarrassingly, we weren’t wearing helmets.

Luckily, Arno was on his motorbike behind us and able to flag down a songthaew — a covered pickup truck with seats in the back designed to shuttle around tourists — and take us to an international hospital. I don’t remember much about the ride except that I looked down at my bloody hands, thinking to myself that something terrible had happened. The rest of the ride was a blur.

I recall lying on a bed with bright overhead lights and hearing screaming — I later found out it was me, hysterical as they cleaned out our wounds and stitched us up, with my tongue and knee particularly mangled. I can only assume my knee hit the ground first and I likely bit my tongue.

“Where are your damn helmets, ladies?!”

Lying side by side, unable to walk due to our injuries, Jodi and I stared at the single English-language channel on the TV in our room in silent terror, waiting for the nurses to arrive for our daily wound cleanings.

I had never experienced a sense of dread quite like this before. The nurses would gently scrape the pus out of our wounds with scissors and douse them in iodine before putting on fresh gauze, a painful process that had us writhing in the beds in pain and fighting back tears as the women smiled nervously in sympathy.

No doubt, we weren’t the first damaged backpackers they’d laid their hands on and we certainly wouldn’t be the last.

Our insurance provider told us they’d cover our flights home — but not our medical bills. Foolishly, we assumed we wouldn’t need full coverage and just bought the basic policy.

Food is one thing. Healthcare is quite another. Being Canadian, where healthcare is publicly funded, we had no idea how much our treatment would cost.

It turned out, our bills had already ballooned into thousands of dollars, chipping away large chunks of the savings we’d worked so hard to accumulate to fund our once-in-a-lifetime journey.

We needed to get home fast — as uncomfortable as the journey would be.

Back to Canada, 11 months ahead of schedule

Arriving at Koh Samui Airport, I’ll never forget the looks on the faces of fellow air travelers as we were rolled into the departure zone.

With its thatched roof and open-air seating, this airport was designed to evoke feelings of escape, welcoming you to a delightful beach holiday filled with swaying palms and white sandy beaches.

We were the ultimate juxtaposition. There we sat in our wheelchairs, covered in gauze, splotches of iodine accentuating the “road rash” that covered us.

People stared and whispered, some approaching to ask what the hell had happened. I felt offensive. Ashamed, even, for ruining their final moments in paradise with my hideous presence.

Not the first tourist to wind up in a Thai hospital after a motorcycle mishap, and certainly not the last.

The flights back to Canada were a blur thanks to the strong painkillers the hospital gave us for the long journey that took us from Samui to Bangkok to Taipei to Vancouver to Edmonton — all followed by a three-hour drive back to our hometown, where our families lived.

My poor parents, from whom I inherited a life-long love of travel, were in Peru on their own adventure. I forbade anyone in my family from telling them about my troubles as I didn’t want to ruin their vacation. (Remember, this was the pre-Facebook days when such secrets could actually be kept.)

When they got back a week later, I surprised them at the front door, black eyes still not healed. Not the welcome home mother dearest was expecting, given I wasn’t due back in Canada for another 11 months.

Eventually, the wounds healed as most wounds do, leaving some badass scars that I’ve learned to loathe a little bit less with the passing of each year.

Today, I consider them a permanent souvenir of life’s unpredictability, a reminder to avoid casting judgment on others for their bad decisions and, most importantly, to always, always go for the full insurance package.

Jodi and I didn’t abandon our travel plans, either. We spent two months at home with our parents, then, sufficiently healed up, restarted our journey in Bali, where we traveled for six weeks before carrying on to Australia for our working vacation — albeit with a far tighter budget than intended.

Nearly two decades later, we returned to Koh Samui for a friend’s wedding.

And the accident didn’t sour me on Thailand, either.

Just a few years after that Australia trip I moved here permanently and have lived in Bangkok for the last 17 years, happily ensnared in marriage and motherhood — though I could do without my mortgage.

Jodi and her family even flew here for a six-week visit in 2018, a trip that had us ziplining through treehouses in Laos and, yes, enjoying the beaches of Koh Samui we never had a chance to experience first time around.

Rest assured, no motorbikes were driven.