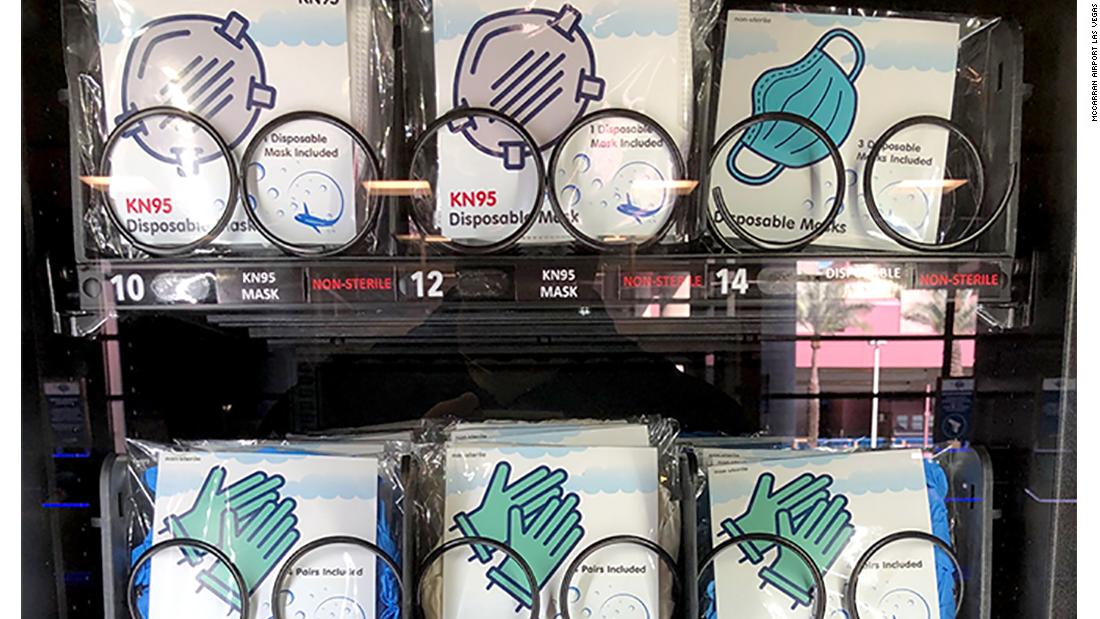 (CNN) — Running out of PPE products? If you’re in Las Vegas and planning to fly, the airport could provide a very clean and sanitized getaway.

On Thursday, McCarran International Airport announced on Twitter that they had installed new vending machines loaded with personal protective equipment.

According to McCarran Airport spokesperson Christine Crews, “The whole world is going through behavioral modification and learning new habits, so it’s not unthinkable that someone could show up at the airport and not have the new necessities that are part of travel.”

There are three vending machines available to passengers, two on either side of the Terminal 1 ticketing area and another near the Terminal 3 TSA checkpoint, she told CNN Travel in an interview after the tweet was sent.

“I do believe we are the first in the nation to have these vending machines,” says Crews.

The white vending machines look much like a snack machine — but with more prized items inside.

PPE anyone? It’s just a vending machine away in McCarran International Airport in Las Vegas.

They have six rows of PPE products. The top of the machine reads “Clean & Safe Travels,” and you retrieve your purchase at the bottom by pushing in a door labeled “PPE.”

Inside the machines, there are a few hand sanitizer options, alcohol wipes, a four-pack of disposable gloves and a selection of masks.

“That’s as it’s stocked now. There could be rotating stock based on what’s available,” said Crews. She went on to say, “this might be the first one you see, but I’m confident it won’t be the last.”

If You Are Smart, Your Super Bowl LVII Party Can Cost You Less Than It Did Last Year
Hong Kong will give away half a million plane tickets. Here’s who can get them first
Fever-Tree And It’s Co-Founder Tim Warrilow Are Still Challenging Industry Norms
The best spa hotels in Manchester
The Silver Oak Release Day Events Are One Of The Keys To Its Success