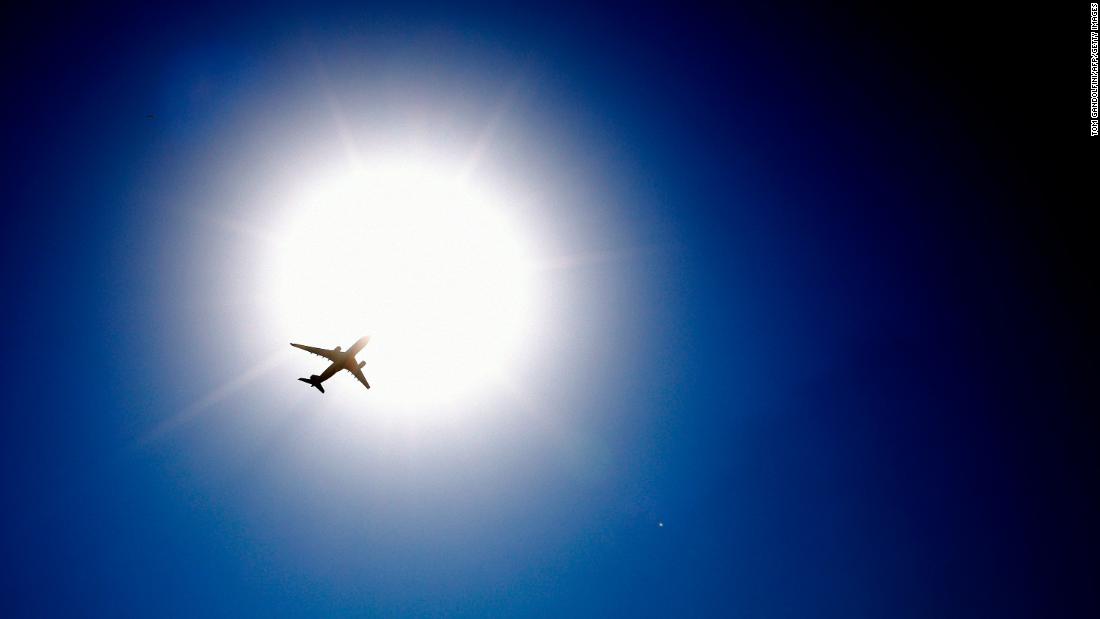 Putting down the paintbrush, she picked up her phone and began searching airfares to return home.

“I watched a seat on the flight I wanted go from $200 to $70, to $350,” Bouzid tells CNN Travel. “I booked it and flew, but the flight was spookily empty. I was panicking, and the changing price made me wonder how much I’d be paying to return to finish my work, when all this is over.”

As countries formulate plans towards reopening borders and businesses, and airlines begin to see a return of passenger traffic, Bouzid’s question is pertinent. What will airfares be like, when “all this” is over?

Delta Air Lines is blocking middle seats and capping flight loads through June 30 for social distancing, allowing only 50 to 60% of available seats on a flight to be booked. Other airlines adopting similar controls include Emirates, American Airlines, Japan Airlines, United, Wizz Air and more.

Many other airlines are allowing bookings as normal, with one going so far as attempting to have passengers pay to observe social distancing. On May 4, ultra-low-cost US carrier Frontier Airlines announced a “More Room” fee, purchasable for flights between May 8 and August 31. With this fee, a passenger could pay from $39 each way to guarantee that the middle seat stays unoccupied.

The fee lasted all of 48 hours; late on May 6, the airline rescinded the plan after it received criticism from members of the United States Congress.

“We recognize the concerns raised that we are profiting from safety and this was never our intent,” Frontier CEO Barry Biffle said in a letter to the lawmakers.

Nonetheless, it’s IATA, the global airline trade association, that wants to have the last word on the issue of social distancing on aircraft. Its May 5 press release advocates against forcing airlines to block middle seats.

“IATA is essentially saying that airlines’ financial health matters more than the health of their employees or customers,” says Henry Harteveldt, airline analyst at Atmosphere Research Group. “That press release includes an estimate that airfares will have to increase if carriers are required to leave middle seats open. If demand remains low, and airlines have to compete for a limited number of travelers, airfares will likely use low fares to attract as many travelers as they’re able.”

What’s crucial to restoring that demand, says Harteveldt, is first restoring a sense of safety.

“Fear and trust will be the two emotions at the forefront of people’s minds when planning a trip, and if a person doesn’t feel an airline adequately respects their health, they will find an airline that does.”

Masks, face shields, temperature screening, social distancing… the future of air travel will look radically different from the past. CNN’s Richard Quest looks at how global airlines are changing travel to try and keep people safe in the face of the coronavirus outbreak.

Oil prices are dropping, so will airfares go lower?

Blended and refined, crude oil becomes the jet fuel needed to literally power aviation. Airlines levy fuel surcharges to help pay for it, which are included in the final ticket price as a “YQ” fee, which accounts for variations in fuel cost. At the end of April, prices for barrels of crude oil dropped off a cliff.

For a standard British Airways economy round-trip ticket between London and Johannesburg for a trip in August 2020, the YQ fuel surcharge is £189, 30% of the total £610 airfare (that’s a $229 surcharge making up a $737 fare). Would British Airways seek to pass potential savings on jet fuel prices to passengers, by removing or lessening fuel surcharges? If only it was so simple.

“Jet fuel typically accounts for 20-25% of an airline’s operating expenses,” Manoel Suhet tells CNN Travel. Suhet, CEO at Business Traveler Deals and a former airline executive with a background in international oil distribution, weighs that if crude oil and jet fuel prices continue to decline, air carriers may benefit from this lower price environment, but it will hardly be immediate.

“Many airlines use fuel hedging to minimize the risk of fuel price volatility by agreeing to purchase a certain amount of oil in the future at a set price,” says Suhet. “And the airlines are adapting these strategies to the current climate, to improve cash-flow position by streamlining costs.”

In other words, even though oil is cheap, jet fuel still needs to be refined from it, a process that adds to the price, and laying out cash right now to buy future fuel isn’t exactly at the top of an airline’s to-do list.

Destinations need tourism, so will there be airfare deals?

Uncertainty breeds hesitation and, for some, even shockingly low airfares may not be enough to inspire bookings until the health and economic situations of destinations stabilize.

Kathy Kass, a New York City lawyer and fitness blogger, typically travels internationally every month and likes to monitor airfare deals. In March, she began canceling planned trips and holding off on planning others: “I was rebooking for late June into early July, thinking things have to be okay by then, but now I’m sitting with vouchers for a few airlines and I don’t really want to collect more.”

She has been tempted, however. On April 29, travel blogs kicked up a frenzy over an $840 round-trip business class deal from Canada or Mexico to Bali, Indonesia, a ticket that typically prices more than four times that amount.

Kass decided not to book. “I’ve always wanted to visit Bali, but I just don’t know what the situation will be,” she tells CNN Travel. “I don’t want to put myself in harm’s way. I also don’t know what’s going on in Indonesia, and don’t know when Bali will again be ready for guests.”

Such sentiments will prove major obstacles to tourism revival, and the Italian island of Sicily has already announced their plan to overcome this hesitation and grease a return for holidaymakers.

The Times of London reports that Sicily’s regional government has set aside €50 million for paying half of airfares and one of every three hotel nights for visitors, while also including free entry to museums and archaeological sites. The caveat? Travelers willing to take advantage must holiday in Sicily this year, following the opening of Italy’s borders to foreign tourists, and that date hasn’t yet been set.
Asiana Airlines is taking a similarly forgiving stance, promoting ticket sales with the promise of “buy now, fly any date.” Book a flight from the United States to South Korea on Asiana and the airline will waive change fees not only once, a conciliation that has become standard among airlines during COVID, but up to three times.

The world’s top aviation hubs for 2020 have been revealed at the annual Skytrax World Airport Awards.

Airlines are adjusting for demand, so will airfares stay the same?

In the heart of Australia’s red center, at an airport more accustomed to welcoming tour groups bound for Uluru, the tarmac has transformed into a museum to modern Singaporean commercial aviation.

More than $5 billion worth of aircraft are parked at Alice Springs Airport, from Singapore A380s and 777s, to Scoot 787s and SilkAir 737s. It’s hopefully not “goodbye,” but “see you later” for these planes, as the arid environment of the Outback helps keep them ready to resume service. But, for many other aircraft, the Covid-19 crisis will see them go gently into a good night.

Virgin Atlantic has sped up the retirement of their 747 and A340-600 fleets, while also closing a base at London-Gatwick. KLM is saying goodbye to its iconic 747s sooner than planned, and American Airlines had a busy April retiring its 757, 767, E190 and A330-300 fleets (though some AA 767s are still flying as makeshift cargo planes).

And, as planes leave the skies, so do flight and cabin crew. In a May note to the pilots of United Airlines, as obtained by Simple Flying, Bryan Quigley, senior vice president of flight operations at United, shares the sobering fact that United pilots currently outnumber passengers: “On average we are only carrying about 10,000 passengers per day…we currently have more pilots than passengers on any given day.”

This is hardly the leading edge of aviation sector jobs cuts; some airlines have been slicing staff for weeks, with Ryanair planning to lay off 3,000, British Airways furloughing more than 30,000, and Lufthansa Group placing 80,000 workers on reduced hours, all by the start of May.

In no uncertain terms, airlines are adjusting for demand. This agility is key to allowing them to continue offering airfares as affordable or as “normal” as the public were accustomed to paying prior to the Covid-19 crisis.

“All major airlines are expecting their companies to have a smaller size once they resume operations,” says Pablo Chiozza, CEO at World Travel Solutions and former senior vice president at LATAM Airlines. “This means that their capacity will be adjusted to the demand, and at run rate they are not expecting many empty seats.”

So, how expensive will air travel be?

After the Covid-19 crisis ends and Nadia Bouzid goes to book a one-way economy flight back to Cancun to finish her mural, the price of the ticket may be $70, but it could also be $200 or $350.

Airfares will continue to respond to supply and demand, but the possibility of tourism promotions or the need to purchase social distance on planes are emerging — provisionally, at least — as forces destined to push prices a little lower, or a little higher.

Opinions on what are or are not good deals on tickets and the decision to purchase will, as before, still be up to you, the traveler.