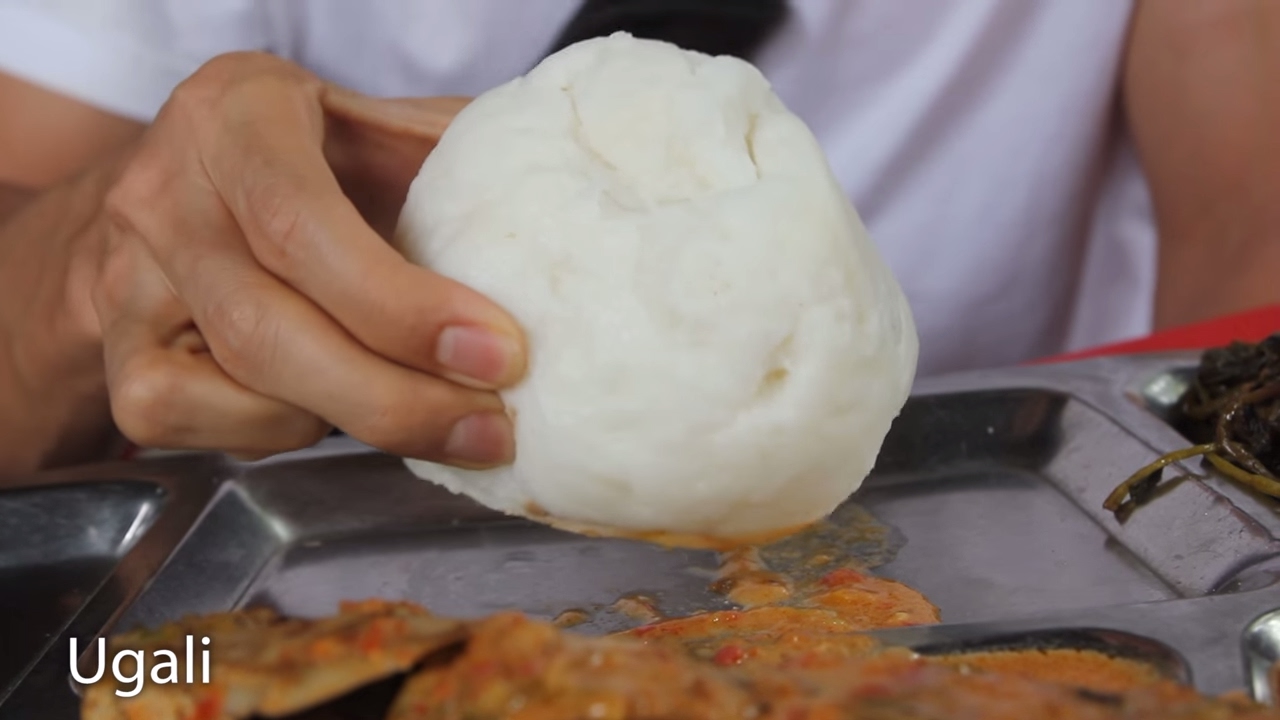 Dar Es Salaam is the largest city in Tanzania, and it’s a city that attracts people from around the country. For this reason there’s a great variety and mixture of Tanzanian food and restaurants that serve some of the best African food you’ll find anywhere in Tanzania. One of the typical home-style restaurants in Dar Es Salaam, actually has no real name, but it’s referred to as the Scouts Canteen, probably because it’s located on the Boy Scouts of Tanzania campus.

It’s kind of a bar, but during lunchtime, Mama Theopiste, as she’s known, shows up with pots full of local food that’s sure to satisfy. People begin to break for lunch, filling up on huge plates of Tanzanian food. Today I decided to order a fish known as mchuzi wa samaki, which basically translates to a fish curried in coconut milk. Even though we were by the sea, the fish is actually from the province of Mwanza, Tanzania, next to Lake Victoria. The fish, known as a sato fish, is similar to a tilapia. The fish was made into a thick and creamy coconut gravy spiced with spices and tomatoes and onions. I ordered my mchuzi wa samaki along with the staple of East Africa known as ugali. Ugali can be made from a number of different flours, in this case from corn flour, that’s cooked with water until it becomes a blob of cornmeal mush. Ugali is the starch and filler of the meal and it’s served throughout Tanzania.

I do like ugali, definitely not more than rice, but it does go well with sauce, especially that creamy coconut curry sauce and the fish. The Tanzanian food at Scouts Canteen was pretty delicious, and after chowing down on my lunch, I could barely resist taking a long nap, my stomach full to the brim. In Tanzania, definitely sample mchuzi wa samaki, African fish coconut curry, and you can either eat it with ugali or with rice.

The Tanzanian food served at Scouts Canteen is a great place for a seriously filling lunch in Dar Es Salaam, Tanzania, and the food is always prepared fresh by Mama Theopiste – she’s friendly and cooks well.

Finally, subscribe so you don’t miss the next tasty adventure http://www.youtube.com/subscription_center?add_user=migrationology

How Brazil Can Use Domestic Fertilizer Production To Ensure Its Continued Role In The Global Food Supply
Hong Kong will give away half a million plane tickets. Here’s who can get them first
Luxury stocks rally from China reopening, but world’s largest luxury market may choose to shop ‘in-house’
Antibiotics Use In Farm Animals Is Growing—Here’s Why It Could Pose A Danger To Humans
Ant-Man And Heineken Join Forces In First Super Bowl Commercial For Non-Alcoholic Beer